The spill fouled the famed sands of Huntington Beach, known as Surf City USA, and could keep the ocean and shoreline closed there and in some other communities to the south for weeks

Oil has been washing up on some Southern California beaches since a leak in an underwater pipeline from an offshore platform sent tens of thousands of gallons of heavy crude into the ocean waters. The spill fouled the famed sands of Huntington Beach, known as Surf City USA, and could keep the ocean and shoreline closed there and in some other communities to the south for weeks.

Here's a look at what happened, who's involved and the aftermath:

Boaters off Orange County and residents of Newport Beach started reporting a petroleum smell in the air and oily sheen on the water Friday afternoon, Oct. 1.

The following morning the Coast Guard confirmed a spill. The sheen on the ocean was miles wide and crude started washing ashore in sticky, black blobs. The leak occurred about 5 miles (8 kilometers) offshore at a depth of about 98 feet (30 meters) and came from a pipeline owned by Amplify Energy. The Houston-based company also owns and operates three nearby offshore platforms that pipe oil into Long Beach. 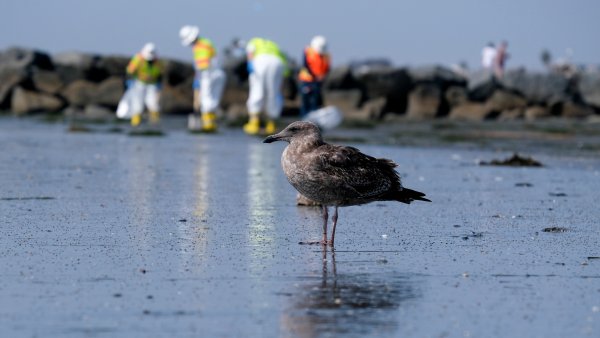 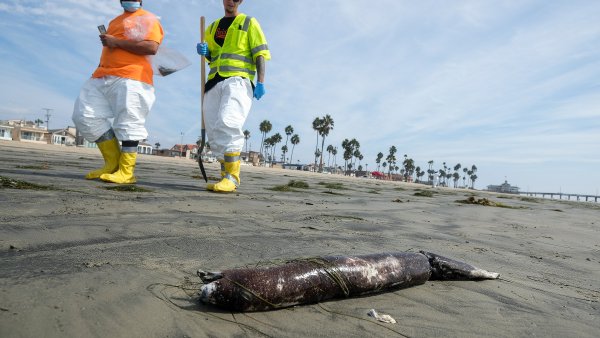 Oil first washed up in Huntington Beach, including Talbert Marsh, a sensitive wetland. Crude was later spotted down the Orange County coast, in Newport Beach, Laguna Beach and Dana Point. By Thursday tar balls were reported washing up in Carlsbad, in San Diego County.

HOW MUCH OIL LEAKED?

David Pettit, a senior attorney at the environmental group Natural Resources Defense Council, finds it hard to believe Amplify doesn’t know how much oil it lost. “If they know what the flow rate was in the pipeline, and how much the pressure dropped, and for how long, you could calculate that in a matter of minutes,” Pettit said.

HOW WAS THE LEAK DISCOVERED?

A commercial vessel anchored off Huntington Beach reported to a national hazardous spill hotline staffed by the Coast Guard that it saw a sheen more than 2 miles (3 kilometers) long just after 6 p.m. Friday night.

A satellite image shot by the European Space Agency indicated a likely oil slick in the area around 7 p.m., which was reported to the Coast Guard at 2:06 a.m. Saturday after being reviewed by a National Oceanic and Atmospheric Administration analyst.

The Coast Guard said it did not act on either report, deciding to wait until daybreak because darkness and a lack of technology would hamper its search for oil.

Amplify CEO Martin Willsher said the company did not discover the leak until it saw oil in the water at 8:09 a.m. Saturday.

Here’s what you need to know about how the leak happened and how it impacts wildlife and humans.

However, other reports indicate the company had signs of a leak as early at 2:30 a.m. Saturday. Federal regulators said an alarm on Platform Elly alerted a control room operator at that time to a drop in pipeline pressure that could indicate a leak.

The company did not report the leak until 8:55 a.m., according to the California Office of Emergency Services. The company that reported the leak on behalf of Amplify said the incident occurred at 2:30 a.m.

Around the time the company reported the spill, the Coast Guard said it located oil in the water.

The cause is under investigation.

Amplify CEO Martin Willsher first suggested Monday that an anchor from one of the many commercial vessels that use the massive Los Angeles-Long Beach port complex might be to blame. The next day the Coast Guard said divers found that a 4,000-foot (1,219-meter) section of the pipeline was “laterally displaced” by about 105 feet (32 meters). It's bent “like a bow string,” Willsher said.

Video of the ruptured pipeline released by the Coast Guard showed a thin 13-inch-long (33-centimeter) crack that experts said could indicate a slow leak that initially was difficult to detect.

A Coast Guard investigator said the pipeline was likely damaged by a ship’s anchor several months to a year before it ruptured. After the first strike it’s possible other ships’ anchors subsequently struck the steel pipe, said Capt. Jason Neubauer, chief of the guard's office of investigations and analysis.

It remains unknown when the slender, 13-inch (33-centimeter) crack began leaking oil, and investigators will pour over a year of data on ship movements near the area of the break. No ships have been identified as suspects at this point.

That will depend on how much oil is out there.

Local officials, who feared an environmental catastrophe at first, have more recently voiced hope that the total spill will be less than initially feared. So far, only a handful of oiled birds have been recovered. Teams are out searching for affected animals in the spill area and beyond. Environmentalists say it’s too soon to know how many seabirds, marine mammals and other animals will ultimately be affected by the oily film covering marsh areas and floating on the ocean — or for how long.

Researchers say the impact on animals will take a while to understand. They are just starting to learn about some of the long-term effects from the 2010 Deepwater Horizon oil spill. And many problems remain unseen as oil components build beneath the surface of the ocean.

Out on the water by the rigs, there’s no visible sheen and no stench of oil like the putrid odor that pervaded Huntington Beach in the days after the incident.

Though California has not granted a lease to a new offshore oil and gas rig in 5 decades, drilling on previously established wells still happens off the coast. But after the Huntington Beach oil spill, activists and politicians are renewing calls to shut down offshore drilling entirely . Lauren Kubiak from the Natural Resources Defense Council explains.
Copyright AP - Associated Press