Italian authorities kept some 7,000 people on board a cruise ship for nearly a day while they checked one passenger for a possible infection.

European countries stepped up efforts Thursday to contain the virus sweeping through central China, sending a chartered plane there to evacuate hundreds of citizens, scrapping more commercial flights to Chinese destinations and closing Russia's long border with the Asian giant.

Italian authorities kept some 7,000 people on board a cruise ship for nearly a day while they checked one passenger for a possible infection.

An A380 evacuation flight took off Thursday morning from a former Portuguesemilitary airport at Beja, 200 kilometers (120 miles) southeast of Lisbon, carrying just its pilots and crew.

Captain Antonios Efthymiou said the flight was going first to Paris, to pick up a team of doctors and extra crew, before heading to Hanoi and then China. He told Portuguese media it would bring back about 350 Europeans. He said the crew would take special medical precautions but did not elaborate.

China has reported 170 deaths and at least 7,800 infections have been confirmed worldwide from the virus that emerged last month in the central city of Wuhan. Sports, transport and cultural events have been cancelled across the country and over 50 million people are under a government lockdown in central China.

In Europe, there have been 10 confirmed cases of the virus so far: five in France, four in Germany and one in Finland. 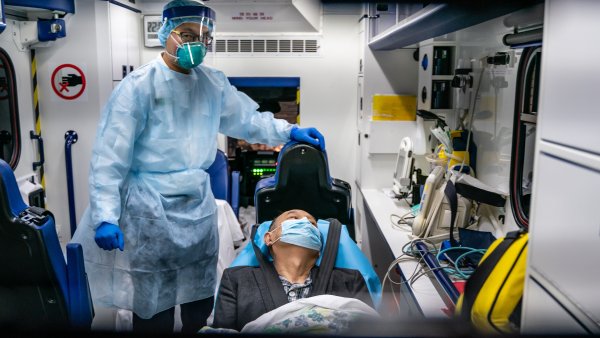 In Moscow, Russian Prime Minister Mikhail Mishustin issued a decree ordering the temporary closure of the country's border with China, which extends for 4,200 kilometers (2,600 miles). In addition, all train traffic between the two countries, except for one train connecting Moscow and Beijing, was stopped Thursday.

Britain said its delayed repatriation flight for 200 U.K. citizens in Wuhan would leave there on Friday, with the returning Britons quarantined for 14 days upon arrival. The U.K.-government chartered plane had been due to return earlier but it was delayed because permissions form the Chinese government had not come through.

Italian health authorities did not allow 6,000 passengers and 1,000 crew aboard a cruise ship docked north of Rome to get off after a passenger from Macao came down with flu-like symptoms. The Costa Crociere cruise line said the 54-year-old woman and her partner, who had no symptoms, were immediately put into isolation Wednesday and the case reported to Italian maritime authorities.

“All the planned mechanisms were activated. Health authorities are on board, doing checks,” Italian Coast Guard Cmdr. Vincenzo Leone said at the port of Civitavecchia. “The situation is under control. There’s a security cordon on the dock.”

The ship was sailing from Mallorca, Spain, to Civitavecchia on a weeklong Mediterranean cruise. Later Thursday, just over 1,000 passengers were allowed off the ship for a walk through sunny Rome.

The Czech Republic announced it was stopping issuing visas to Chinese citizens due to the outbreak. More than 600,000 Chinese tourists are estimated to have visited the Czech Republic last year, especially its old-world capital city of Prague.

On the retail front, Swedish furniture and home goods retailer IKEA announced all its stores in mainland China would remain closed to protect customers and staff from the outbreak. The stores are a favorite haunt of Chinese city dwellers, both for shopping and for just hanging out.

More European airlines announced halts in service to China, all citing efforts “to protect the health and security of customers and staff.”

Scandinavian Airlines announced it was halting all its flights to Beijing and Shanghai beginning Friday and runningthroughFeb. 9th. SAS has 12 regular weekly flights from Scandinavia to China.

Spain’s Iberia national airline halted the three return flights a week it runs between Madrid and Shanghai due to the virus, a move it said would continue through February.

Those announcements followed earlier moves to halt or reduce flights to China by other European airlines, including British Airways, Lufthansa, Austrian Airlines, Swiss and KLM.

Norway, which is not part of the EU, said it was working with other European countries to get Norwegians out of China.

The virus comes from the coronavirus family, which includes the common cold but also more severe illnesses, such as SARS and MERS.

Nicole Winfield in Rome, Ciaran Giles in Madrid, Karel Janicek in Prague, Gianfranco Stara in Civitavecchia, Angela Charlton in Paris and Daria Litvinova in Moscowcontributed to this report.