Protesters held signs that read "Don the Con," ''Go back to New York," ''Show your taxes!"

Protesters took to the streets in dozens of cities nationwide Saturday to call on President Donald Trump to release his tax returns, saying Americans deserve to know about his business ties and potential conflicts of interest.

Organizers said the Tax Marches were scheduled in nearly 150 cities.

The demonstrations came just days before Tuesday's deadline for taxpayers to file their returns. Trump was the first major-party nominee in more than 40 years not to release his tax returns, saying it was because he was under audit. He later said that voters don't care. 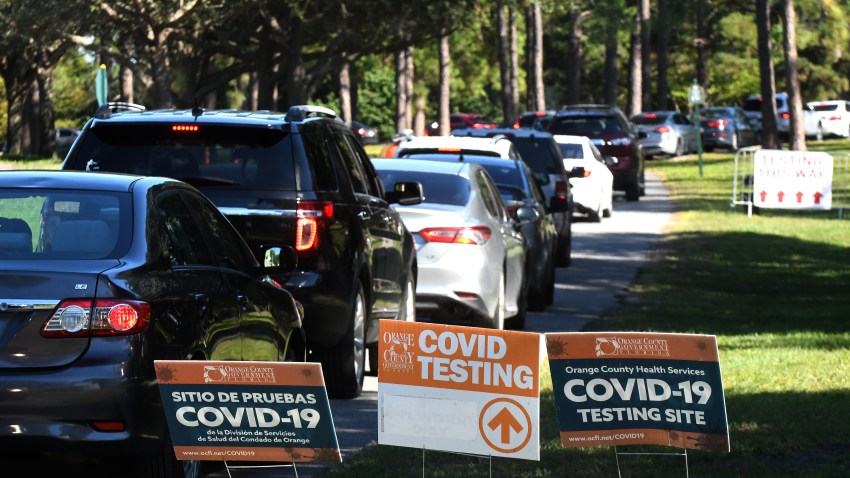 But 71-year-old Ilene Singh said he's wrong. She rode a bus from New Jersey to New York City with her friend Geraldine Markowitz, 83, to take part in protests. "We're here to say we care," said Singh.

Pushing her walker, Karin Arlin, 85, a Holocaust survivor who came to the U.S. from Germany when she was 9, said she's also worried about the direction of the country.

"You don't know which way the country goes," said Arlin next to her 89-year-old husband who fled Czechoslovakia during World War II. "I hope Republicans see it."

"We do care. We want to see his taxes," said Ann Demerlis, who was among hundreds who marched in Philadelphia from City Hall to an area in front of historic Independence Hall, carrying signs and chanting "We want your taxes now!"

"It's possible that he can now show his taxes, because his current taxes are not being audited," said Demerlis.

Trump, who spent the morning at his Florida golf course, avoided several hundred protesters when his motorcade took a circuitous route back to Mar-A-Lago, his Palm Beach, Florida, estate. Protesters marched across the bridge that divides West Palm Beach and Palm Beach, chanting and hoisting signs that read "Don the Con," ''Go back to New York," ''Show your taxes!" and "Show me the money!"

In Washington, D.C., one of Trump's sharpest critics in the House spoke to protesters at the U.S. Capitol just before they set off on a march to the National Mall. Democratic Rep. Maxine Waters, of California, said there's nothing to prevent Trump from releasing his income taxes and that "the simple truth is he's got a lot to hide."

"If he thinks he can get away with playing king, he's got another thought coming," Waters said.

In Los Angeles and San Diego, California, demonstrators carried signs bearing slogans like, “What’s he hiding?” and “Surrender Your Returns.”

It was the first ever political protest for Pat Littel and her 97-year-old mother, who attended the San Diego march.

"I think transparency in government should start at the top, and President Trump is setting a very poor example," she told NBC San Diego. "It’s supposed to be government for the people, by the people — not by the elite, for the elite, so I think that’s why we’re all here."

Thousands of people — and three inflatable, dazzling chickens with tufts of Trumpian-orange hair — flocked to San Francisco’s City Hall Saturday afternoon. Scores of people waved around their own W-2 forms and chanted “Lock him up!” – a re-appropriated version of his own campaign chant directed at Hillary Clinton.

While the San Francisco Tax March remained peaceful, in nearby Berkeley, attendees of a separate pro-Trump rally clashed with Antifa-led counter-protesters. The opposing sides exchanged blows, burned flags and set off fireworks, resulting in 20 arrests and 11 injuries, as NBC Bay Area reported.

Tax marchers also took to the streets of Chicago. Images on social media showed demonstrators carrying signs reading "All Tweet and no meat" and "Make him accountable!" People also posted photos of more big inflatable chickens, and what appeared to be pants covered with streams of orange paper – "pants on fire," read the caption posted by one Twitter user.

Earlier, Sen. Ron Wyden, an Oregon Democrat, called on Trump to 'knock off the secrecy and said people have "a basic right to know whether the president pays his fair share."

In Las Vegas, police said a broadcast photojournalist for KLAS-TV was arrested and cited for trespassing and obstructing during a protest at Trump International Hotel near the Strip. Event organizer Laura Martin says at least three others were detained but released. Authorities said the protest was attended by about 250 people.

For four decades, presidents and major party nominees have released some of their tax returns, with the exception of Gerald Ford. Trump's break with precedent has raised questions about possible conflicts of interest.

Senate Democratic leader Chuck Schumer, of New York, has said Trump's refusal to release his returns could hinder Republicans' prospects for a rewrite of the tax code.

Protesters began converging on Cambridge Common in Massachusetts, where they also plan to call on the all-Democratic Massachusetts Congressional delegation to oppose Trump's budget proposal. They say the proposed cuts to health care, education, transportation are cruel and inhumane.

Democratic U.S. Sen. Elizabeth Warren, of Massachusetts, on Friday posted an online video urging Congress to force Trump to release the returns. Democrats are pushing for a vote on a bill from Rep. Anna Eshoo, a Democrat from California, which would require the president and all major-party nominees to publicly disclose their previous three years of tax returns with the Office of Government Ethics or the Federal Election Commission.

Republicans also have rebuffed Democrats' efforts to get the House Ways and Means Committee to act. It has legal authority to obtain confidential tax records, and could vote to make them public.

Many demonstrators said they hoped Saturday's marches would convince Trump to voluntarily release them.

"We do care. We want to see his taxes," said Ann Demerlis, who was among hundreds who marched in Philadelphia from City Hall to an area in front of historic Independence Hall, carrying signs and chanting "We want your taxes now!"

Tuesday is the deadline for taxpayers to file returns.