President Joe Biden expressed support for a cease-fire between Israel and Gaza's militant Hamas rulers in a call to Israeli Prime Minister Benjamin Netanyahu, but he stopped short of demanding an immediate stop to the eight days of Israeli airstrikes and Hamas rocket barrages that have killed more than 200 people, most of them Palestinian.

Biden's carefully worded statement, in a White House readout Monday of his second known call to Netanyahu in three days as the attacks pounded on, came with the administration under pressure to respond more forcefully despite its determination to wrench the U.S. foreign policy focus away from Middle East conflicts.

Biden's comments on a cease-fire were open-ended and were similar to previous administration statements of support in principle for a cease-fire. That's in contrast to demands from dozens of Democratic lawmakers and others for an immediate halt by both sides. But the readout of the call to the Israeli leader showed increased White House concern about the air and rocket attacks —including Israeli airstrikes aimed at weakening Hamas — while sticking to forceful support for Israel.

The U.S. leader “encouraged Israel to make every effort to ensure the protection of innocent civilians,” the White House said in its readout.

An administration official familiar with the call said the decision to express support and not explicitly demand a cease-fire was intentional. While Biden and top aides are concerned about the mounting bloodshed and loss of innocent life, the decision not to demand an immediate halt to hostilities reflects White House determination to support Israel’s right to defend itself from Hamas, the official said, speaking on the condition of anonymity to discuss the private deliberations.

Meanwhile, European Union foreign ministers were meeting Tuesday to discuss how to use the 27-nation bloc’s political clout to help diplomatic efforts to end the fighting between the Israeli armed forces and Palestinian militants. The EU has been united in its calls for a cease-fire and the need for a political solution to end the latest conflict, but the nations are divided over how best to help.

Netanyahu told Israeli security officials late Monday that Israel would “continue to strike terror targets” in Gaza “as long as necessary in order to return calm and security to all Israeli citizens.”

As the worst Israeli-Palestinian fighting since 2014 raged, the Biden administration has limited its public criticisms to Hamas and has declined to send a top-level envoy to the region. It also had declined to press Israel publicly and directly to wind down its latest military operation in the Gaza Strip, a 6-mile-by-25-mile territory that is home to more than 2 million people. Cease-fire mediation by Egypt and others has shown no sign of progress.

Israel carried out hundreds of air strikes in Gaza on Wednesday morning, as Hamas and other Palestinian militants fired rockets at Tel Aviv and Beer Sheva.

Separately, the United States, Israel’s top ally, blocked for a third time Monday what would have been a unanimous statement by the 15-nation U.N. Security Council expressing “grave concern” over the intensifying Israeli-Palestinian conflict and the loss of civilian lives. The final U.S. rejection killed the Security Council statement, at least for now.

Biden has been determined to wrench U.S. foreign policy away from Middle East and Central Asia conflicts, including withdrawing U.S. troops from Afghanistan and ending support for a Saudi-led war in Yemen, to focus on other policy priorities. Internationally for the U.S., that means confronting climate change and dealing with the rise of China, among other objectives.

That shift carries risks, including weathering flaring violence as the United States steps back from hotspots.

Secretary of State Antony Blinken, speaking in Denmark on the first stop of an unrelated tour of Nordic countries, said Monday the United States was ready to spring in to help if Israel and Hamas signal interest in ending hostilities — but that the U.S. wasn’t demanding that they do so.

“Ultimately it is up to the parties to make clear that they want to pursue a cease-fire,” Blinken said. He described U.S. contacts to support an end to the fighting, including the calls he was making midair between his Nordic stops.

Blinken defended the U.S. handling of the decades-old Israeli-Palestinian conflict as America works to push for climate-accord deals, withdraw troops from Afghanistan and turn U.S. attention to what Biden sees as the nation’s most pressing foreign policy priorities.

It’s “a big world, and we do have responsibilities," he said. 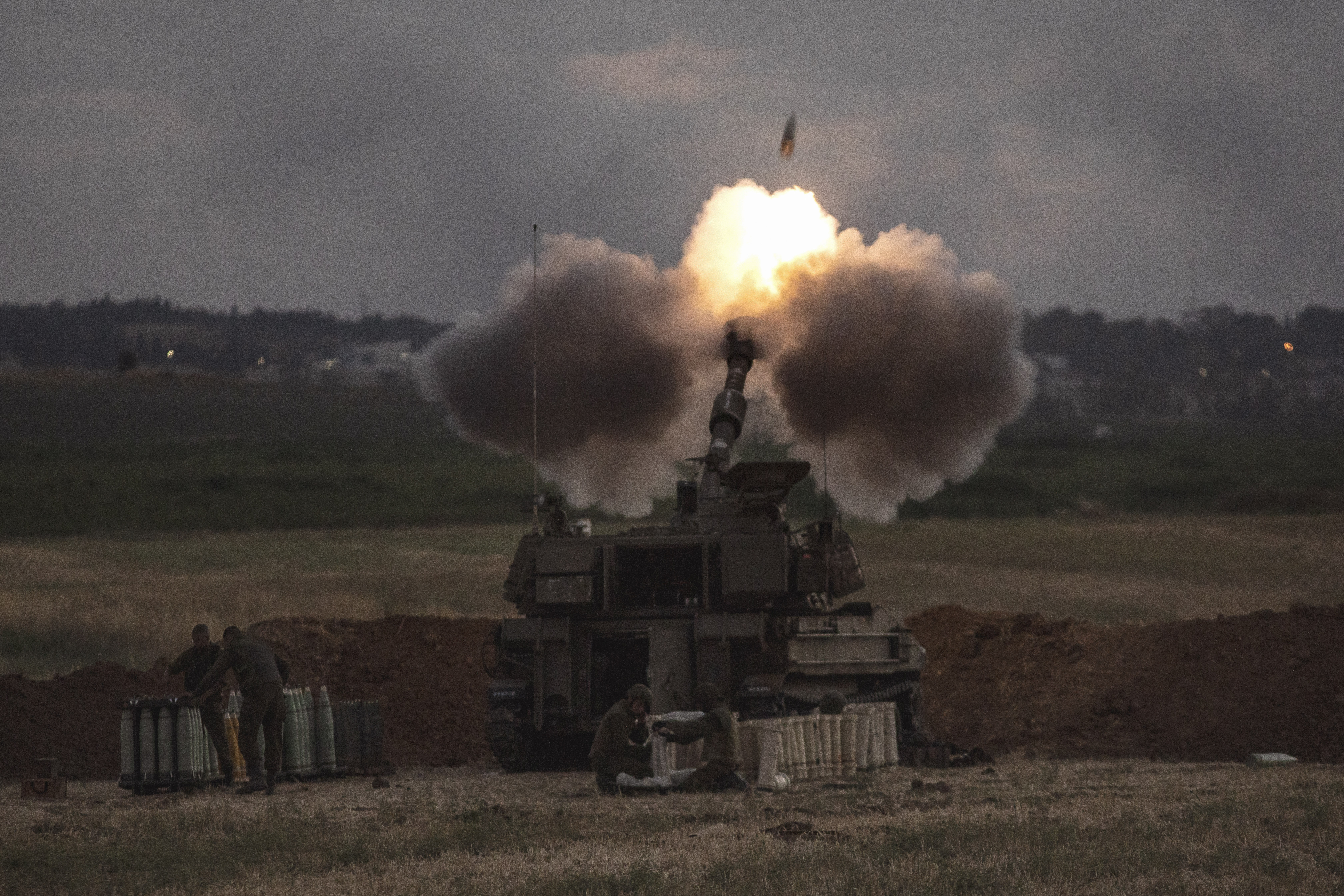 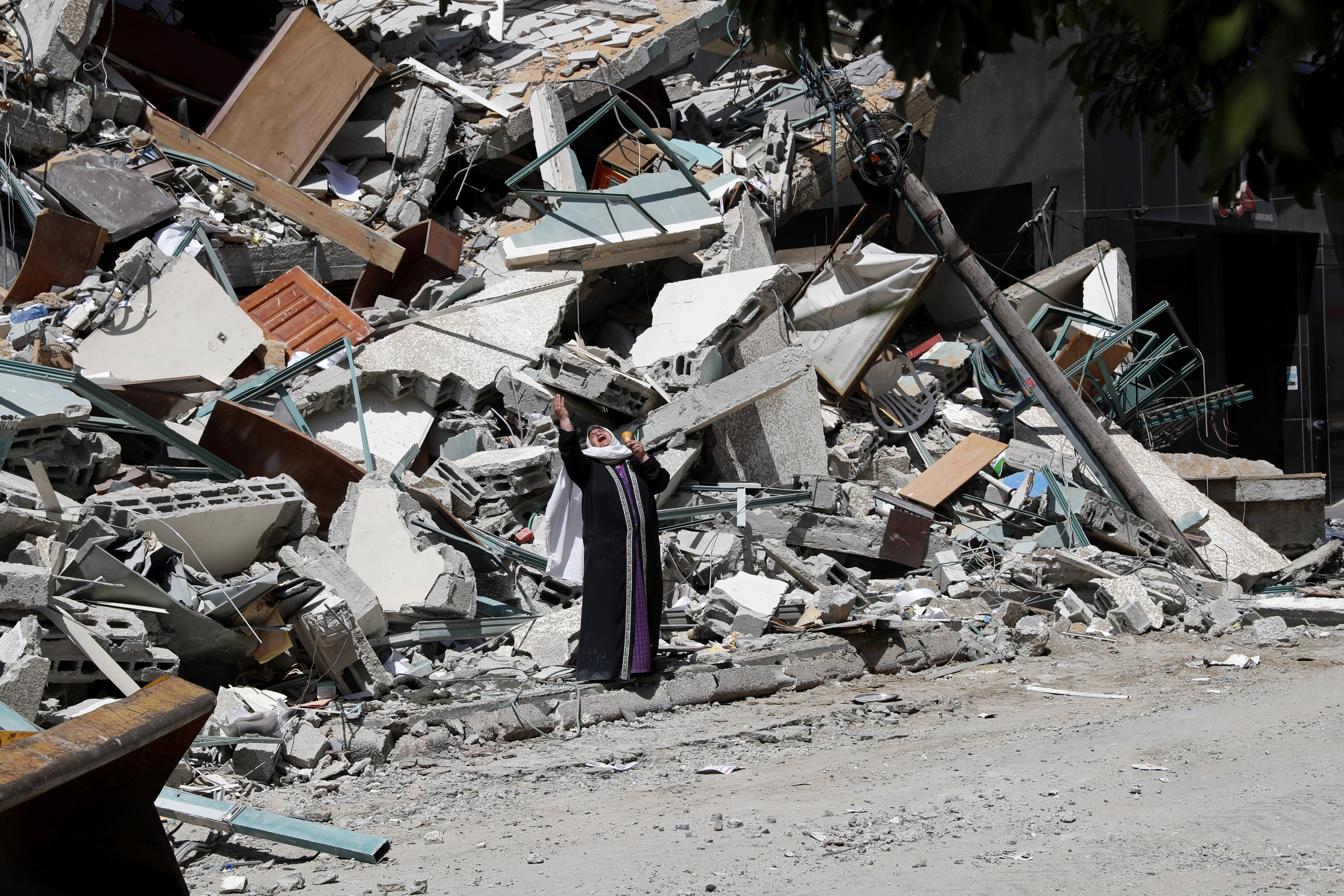 Senate Majority Leader Chuck Schumer on Monday joined dozens of Democratic lawmakers — and one Republican and independent Sen. Bernie Sanders — in calling for the cease-fire by both sides. A prominent Democrat, Rep. Adam Schiff, the House intelligence committee chairman, pressed the U.S. over the weekend to get more involved.

Progressive Democrats have been more outspoken in demanding pressure on Israel — and Republicans and conservative Democrats comparatively quiet, for a politically fraught U.S. issue like support for Israel — as the death toll has mounted.

“We oppose our money going to fund militarized policing, occupation, and systems of violent oppression and trauma,” Bush tweeted.

But Senate Minority Leader Mitch McConnell, R-Ky., took the Senate floor on Monday to assail lawmakers for including Israel in their demands for a cease-fire.

“To say that both sides, both sides need to de-escalate downplays the responsibility terrorists have for initiating the conflict in the first place and suggests Israelis are not entitled to defend themselves against ongoing rocket barrages,” McConnell said.

In a shot at Democrats, McConnell said, “The United States needs to stand foursquare behind our ally, and President Biden must remain strong against the growing voices within his own party that create false equivalence between terrorist aggressors and a responsible state defending itself.”

Sen. Rick Scott, R-Fla., led 19 Republican senators releasing a resolution supporting Israel's side of the fighting. They plan to try to introduce the legislation next week.

Blinken also said Monday he had asked Israel for any evidence for its claim that Hamas was operating in a Gaza office building housing The Associated Press and Al Jazeera news bureaus that was destroyed in an Israeli airstrike over the weekend. But he said that he personally had “not seen any information provided.”