In 2015, the DePaul men's basketball team will be looking for a new home, and Jerry Reinsdorf and Rocky Wirtz have opened their doors

Despite its Lincoln Park campus location, going to a DePaul men's basketball game means a drive out to Rosemont’s Allstate Arena to watch the Blue Demons play. It’s terribly inconvenient and one can look no further than the sparse crowds at games as a direct reflection of being forced to commute from the city via the Kennedy and its unbearable stop-and-go traffic.

The school has been looking to play their men’s basketball games closer to home with their Allstate Arena contract set to expire in 2015. According to Crain’s Chicago Business, United Center owners – and Bulls and Blackhawks owners – Jerry Reinsdorf and Rocky Wirtz have made DePaul a very generous offer to play their games at the Madhouse on Madison.

The deal itself would essentially amount to free rent for the Blue Demons over a 10-year span, as well as a redesigned floor, use of the owner and marketing suites as well as the Bulls’ locker rooms, a dedicated Blue Demons store and other bonuses. But the kicker, DePaul will get to hang its banners atop the United Center, right next to the Bulls and Blackhawks banners already in place. 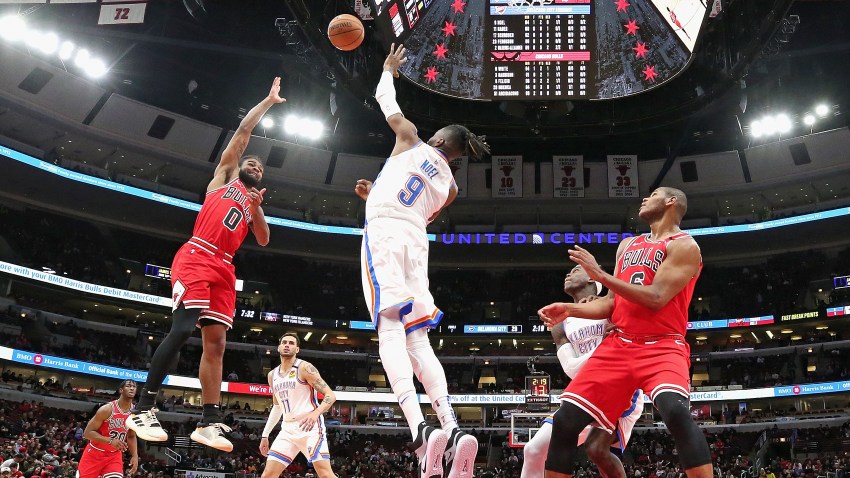 Why such an aggressive push by Reinsdorf and Wirtz, you ask?

Well, DePaul also has another offer on the table, one that includes their very own arena. The new facility would be built near McCormick Place, but the school would have to kick in $75 million of its own money towards construction.

DePaul is said to be interested in the deal that gives them their own arena, and who can blame them? Why share space in Chicago, the same as in Rosemont, when you can have a brand new arena that you’d also have naming rights to?

But no matter which agreement the school settles on, spearheading this push to bring the DePaul Blue Demons back to Chicago after 35 years in Rosemont is none other than Mayor Rahm Emmanuel.

He was instrumental in the Chicago Bulls decision to leave their Deerfield practice facility for a brand new one to be built across the street from the United Center. It’s yet another move in the mayor’s continuing efforts to bring Chicago based sports teams back into the city.