How the Hawks Grabbed a Playoff Spot

First, let's dispel something. This isn't the very definition of "backing in."

It's close, but not quite there. The Hawks weren't all that bad on Sunday. They came up againt a spirited Detroit team, one that I and probably the Hawks didn't expect. Perhaps the worst mistake the Hawks made was embarrassing the team on its home ice and having it booed off after the 1st period. Clearly, the Wings were determined to make up for it. And yet it was still a game that came down to the very last seconds.

But the Hawks didn't charge their way into the playoffs, either. Obviously.

The Hawks needed a gutsy performance from an undermanned team that wasn't any good when it was fully operational. It needed Dallas to freeze at the worst possible moment, and then some divine intervention to keep the puck out of Minnesota's net (as well as Adam Burish's foot which blocked a goal for his own team). This is not exactly closing with a rush and earning your spot. So let's call it "The Stars backed out of the playoffs while the Hawks stood still and the playoffs came to them, where we would have preferred the Hawks charging toward them." OK, that's a little long. Might need an acronym.

But what's done is done, and the Hawks are in the playoffs. They all tried hard to keep themselves out, but now they're here so they might as well do something with it.

Are there reasons for hope? Sure. Dave Bolland and Troy Brouwer may come back before the series is too old. They still have Jonathan Toews. They've found a way to make a third line contribute in Michael Frolik and Ben Smith (it's actually currently the second line, but when Bolland comes back that will change). They still have a defensive corps 1-6 that's probably deeper than most teams still left. Corey Crawford has the potential to steal a game or two.

Do things have to be fixed? Oh yes. The power play wouldn't pass an emissions test right now. Niklas Hjalmarsson is still far too mistake-prone (as today's winning goal proved). Crawford gets funny with his angles (as the first two Wings goals displayed). The 4th line is a wasteland and can't be trusted, meaning the other guys have to skate more, and they can't hold up over 60 minutes. 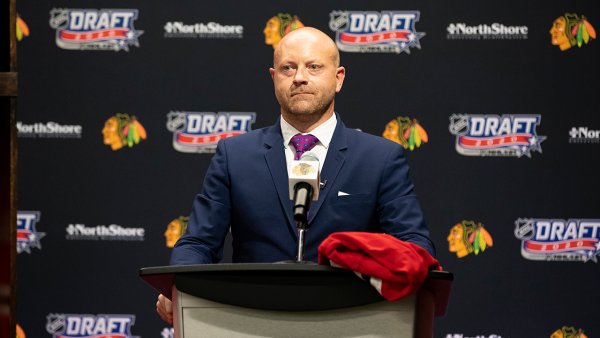 But today was a perfect metaphor for the whole year: Some good, some bad, not quite enough to get what you want, and falling into it with some luck.

But everything starts over now. No one will remember how the Hawks got in if they take off their shoes and stay awhile.