A suburban probationary police officer and his girlfriend were charged with disorderly conduct after authorities said they fabricated a story about an abandoned baby to get the child’s mother in trouble.

Justin Jones, 23, and Kendra Branch, 25, were each charged with one felony count of disorderly conduct, Matteson Police Department said in a statement Sunday.

Police initially said a woman reported finding an abandoned baby while out for a walk on the Old Plank trail near the 3700 block of West 214th Place in the south suburb on Thursday evening.

Believed to be between six and nine months old, authorities said the infant was discovered buckled in a car seat near a dumpster in the secluded, wooded area. The child had a soiled diaper and wet socks, according to police, and developed a fever from sitting out in the cold. 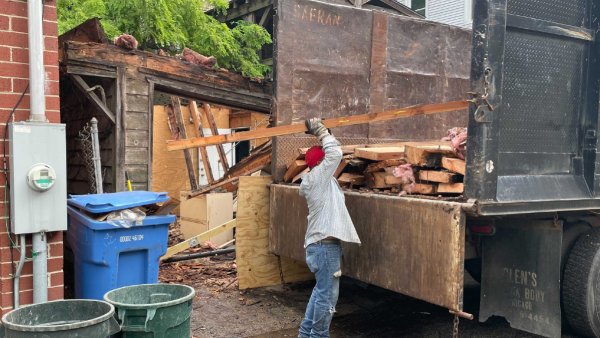 Lincoln Park Garage Being Torn Down After Years of Neighbors' Complaints

Investigators later identified the woman who claimed to have found the baby as Branch, the girlfriend of Jones - the baby's apparent biological father.

Branch and Jones, who authorities said both repeatedly denied knowing the baby to officers conducting the initial investigation, live together in an apartment in the same block where the child was supposedly found.

Throughout the course of their investigation, detectives learned that Branch and Jones "fabricated the entire story, utilizing the child as a pawn" in an attempt to get the baby’s biological mother in trouble with the Department of Child and Family Services "out of spite," according to police.

The charges against the couple "hold both individuals accountable for filing false accusations and creating an atmosphere of discord within the community, as well as wasting valuable resources," Matteson police said in a statement.

Authorities said Jones is a part-time, probationary officer with the Robbins Police Department, which has assisted and cooperated with the investigation. Jones was placed on administrative leave following the incident as the department conducts an internal investigation, officials said.

The child remains in DCFS custody, according to police, who said the agency is conducting its own investigation and will determine the baby’s final placement.