In December 2017, the village of Mount Prospect debuted a new symbol for its police department. The shield-shaped patch overlaid an outline of Illinois and the year of the village’s incorporation, 1917, against the backdrop of an American flag rendered in black and white — save for one blue line.

That was four months after the infamous “Unite the Right” rally in Charlottesville, Virginia, in which white supremacists waved a pro-police “thin blue line” flag. In a news release at the time, the Mount Prospect police department said “the thin blue lined flag honors the law enforcement officers who have made the ultimate sacrifice for their communities.” The statement didn’t mention the flag’s connection to the violence that had ensued in Charlottesville or the flag’s popular association with the Blue Lives Matter countermovement that arose in response to Black Lives Matter.

But in the years since, Mount Prospect has wrestled with whether the thin blue line belongs on police department uniforms — or anywhere — in this predominantly white suburb 24 miles northwest of Chicago.

“Automatically, it makes us wary of the police if they’re putting a Blue Lives Matter flag on their uniform,” said Julia Narain, a Mount Prospect resident of more than 10 years. “I feel that it’s drawing a line between the police officers and the community that they’re meant to serve.”

On Aug. 10, Mount Prospect became the latest of dozens of U.S. cities and towns to take steps toward restricting the symbol’s use by police and other government agencies, following a contentious board of trustees vote that brought more than 100 people to the suburb’s village hall. The thin blue line has become a focal point for community tensions over race and policing in recent years — especially in the wake of the nationwide protests against police violence last summer.

In a 4-3 vote, Mount Prospect’s board of trustees recommended the removal of the patch from police uniforms. The final decision belongs to village manager Michael Cassady, who plans to abide by the board’s vote, a spokesperson told Injustice Watch.

Regardless, the thin blue line flag will continue to appear on the police department’s patrol cars and inside the station — the advisory vote didn’t attempt to prohibit its use on other police property. What’s more, the vehement opposition to its removal from many of Mount Prospect’s residents and elected officials demonstrates that the Blue Lives Matter sentiment in the community reaches well beyond the police. 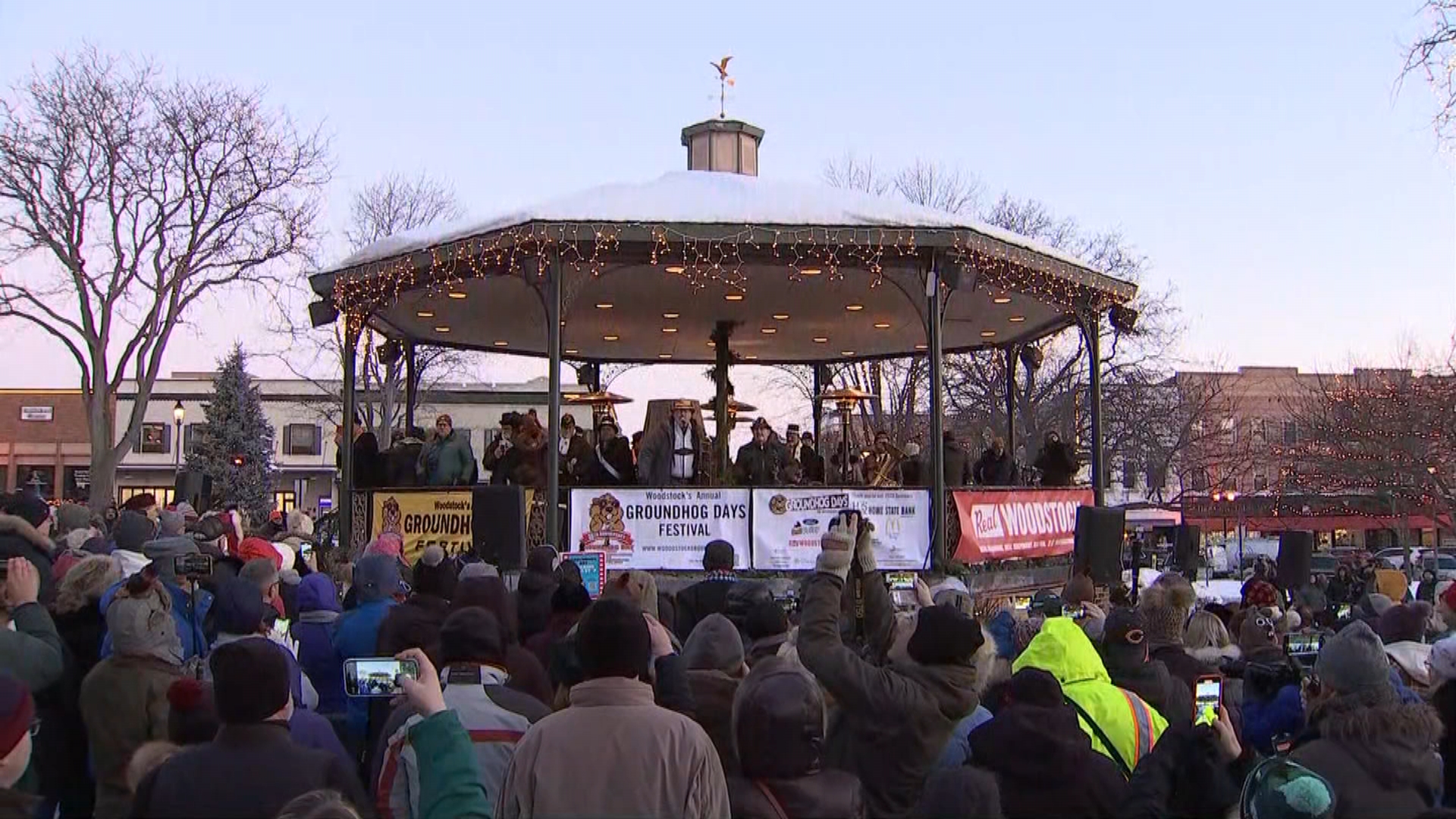 Move Over, Punxsutawney Phil: Woodstock Willie Will Soon Wake in The Chicago Suburb Where ‘Groundhog Day' Was Filmed

‘An approach that is focused on backlash’

The concept of the “thin blue line” is decades-old, but it’s been used since at least the 1920s to refer to the solidarity between police officers and the act of closing ranks around those accused of wrongdoing. The term was appropriated by the Blue Lives Matter movement after New York City police officers Rafael Ramos and Wenjian Liu were killed on duty in December 2014. The flag itself was created by Andrew Jacobs, a white college student who went on to launch Thin Blue Line USA, an online retailer selling pro-police flags, T-shirts, and other gear.

Last year, Jacobs told the Marshall Project that the flag “has no association with racism, hatred, bigotry.”

But critics argue that the symbol’s meaning is unmistakable in today’s context: It has been adopted by hate groups and used to mock movements against police violence, especially in the aftermath of George Floyd’s murder by former Minneapolis police officer Derek Chauvin.

India Thusi, a professor at the Indiana University Maurer School of Law, said when police departments embrace the symbol, it sends a message that they will not respond to calls to hold police accountable.

“They’re reacting by embracing an approach that is focused on backlash and ignoring the history, ignoring the fact that police have engaged in very violent behavior against Black people in this country, and they’ve done so in a racially discriminatory manner,” Thusi said.

Since last summer, numerous government bodies and officials have banned the imagery in police departments and other public institutions such as schools and courts.

Other localities have moved decidedly in the opposite direction. In March 2017, the small coastal town of Ocean City, New Jersey, painted a thin blue line down the middle of its main road to honor police. In a particularly inflammatory instance in April, police in Brooklyn Center, Minnesota, flew a thin blue line flag above their station just days after an officer in the Minneapolis suburb fatally shot Daunte Wright, a 20-year-old Black man, during a traffic stop.

Minneapolis City Council candidate Robin Wonsley Worlobah has since called for a ban on the imagery’s use for all government personnel and property. She said it upholds an oppressive system that the city should not want to be associated with.

‘Nobody wants to bring their children up around that’

Residents of Mount Prospect have pushed back on the local government’s use of Blue Lives Matter imagery since 2019, when the city introduced a new village vehicle sticker with the flag. Following backlash, the city offered another option featuring a photo of one of their police officers — but the original one remains available.

The issue reached a boiling point earlier this year, when Mount Prospect police officer Lisa Schaps was reassigned from her job as a school police officer after defending the department’s use of the thin blue line patch at a village board meeting in June. Later that month, Schaps appeared on Fox News with a fellow officer and Mount Prospect Police Chief John Koziol, all of whom defended the police department’s patch. Schaps has since been reinstated in her role at Prospect High School.

Neither Schaps nor the school district responded to calls from Injustice Watch seeking comment.

After residents continued to raise the issue in village meetings, Mayor Paul Hoefert announced July 13 that the board of trustees would debate and vote on it.

On the day of the Aug. 10 meeting, a northwest suburban chapter of the League of Women Voters hosted a rally outside Mount Prospect’s village hall. Speaking to a crowd of about 100 people, Karen Thomas, an activist leading the league’s diversity, equity, and inclusion initiatives, called the thin blue line imagery “hurtful and disrespectful.”

“Ignoring part of the city’s population is undemocratic, irresponsible, and unacceptable for a department that is supposed to serve and protect everyone,” said Thomas, who lives in nearby Arlington Heights, where she’s also spoken out about racial equity issues.

A group of counter-protesters stationed across the street from the rally soon moved to surround it, yelling profanities and forcing police officers on bikes to create a barrier between the two groups.

Afterward, inside the village hall, Thomas stood with mostly other nonresidents in the overflow room during public commentary, where she said supporters of the patch booed when its opponents brought up race. Thomas, who is Black, said it was “a terrifying experience.”

Those speaking against the patch’s removal included Koziol, who vehemently denied that it represents hateful views.

“To say that this flag is a symbol of hate is a slap in the face to all law enforcement officers and their loved ones that look upon this symbol with reverence,” he said during the public comment portion of the meeting.

Trustee Richard Rogers, one of three votes in favor of keeping the patch, blamed the uproar on “a political agenda to defund the police or corrupt our criminal justice system.”

Meanwhile, trustee Peggy Pissareck argued that the patch doesn’t represent the town’s motto: “where friendliness is a way of life.”

After four trustees, including Pissareck, ultimately voted to recommend removing the patch from police uniforms, the village manager said he would abide by their decision. The patch will be removed from police uniforms by the end of this week, a spokesperson told Injustice Watch.

Injustice Watch reached out to Mount Prospect’s police chief and mayor. Neither returned calls seeking comment or agreed to be interviewed for this story.

Pissareck acknowledges that there’s still work to do. Mount Prospect is undertaking efforts to make its departments, including the police force, more diverse. But she worries that the continued use of Blue Lives Matter symbolism within the police department, including on its cruisers, could steer away applicants of color.

Narain, the longtime Mount Prospect resident who described herself as a half-Indian woman born in South Africa, said she thinks that the symbolism could also intimidate residents who go to the police for help.

“Whether I’m coming in contact with a police officer with this patch on their shoulder or whether I’m coming into a police station that has this in the interior, I’m not going to feel safe and comfortable reporting or doing whatever business I need to do in that building,” she said.

While she said she’s never had a personal problem with the police, she has heard from other people of color who said they have been treated unfairly. But Narain also emphasized that racism in her community spans beyond the police department.

A mother of three girls, Narain said her 14-year-old daughter has struggled in Mount Prospect. She deals with harassment from fellow students and “gets called the N-word a lot,” she said.

The thin blue line controversy has only heightened Narain’s concerns. At the August rally, she remembers supporters of the patch screaming insults and flashing white power signs.

“Nobody wants to bring their children up around that,” she said. “It’s dangerous, and it’s scary.”