Who from the Chicago area is competing in the Tokyo Olympics? Meet your local Team USA athletes!

Let's hear it for Olympic athletes from Chicago and Chicago's suburbs! An elite group of local athletes is making their mark at the Summer Olympics in Tokyo. Meet them below and find out when to watch them!

Insights: Loyd plays guard for the Seattle Storm. She graduated from the University of Notre Dame in 2015 where she helped her team compile a 108-6 record. She also competed in three NCAA Final Fours and was voted ESPNW National Player of the Year in 2015. She has one older brother, Jarryd, who played basketball at Valparaiso University and played professionally overseas. Loyd also played tennis and soccer. 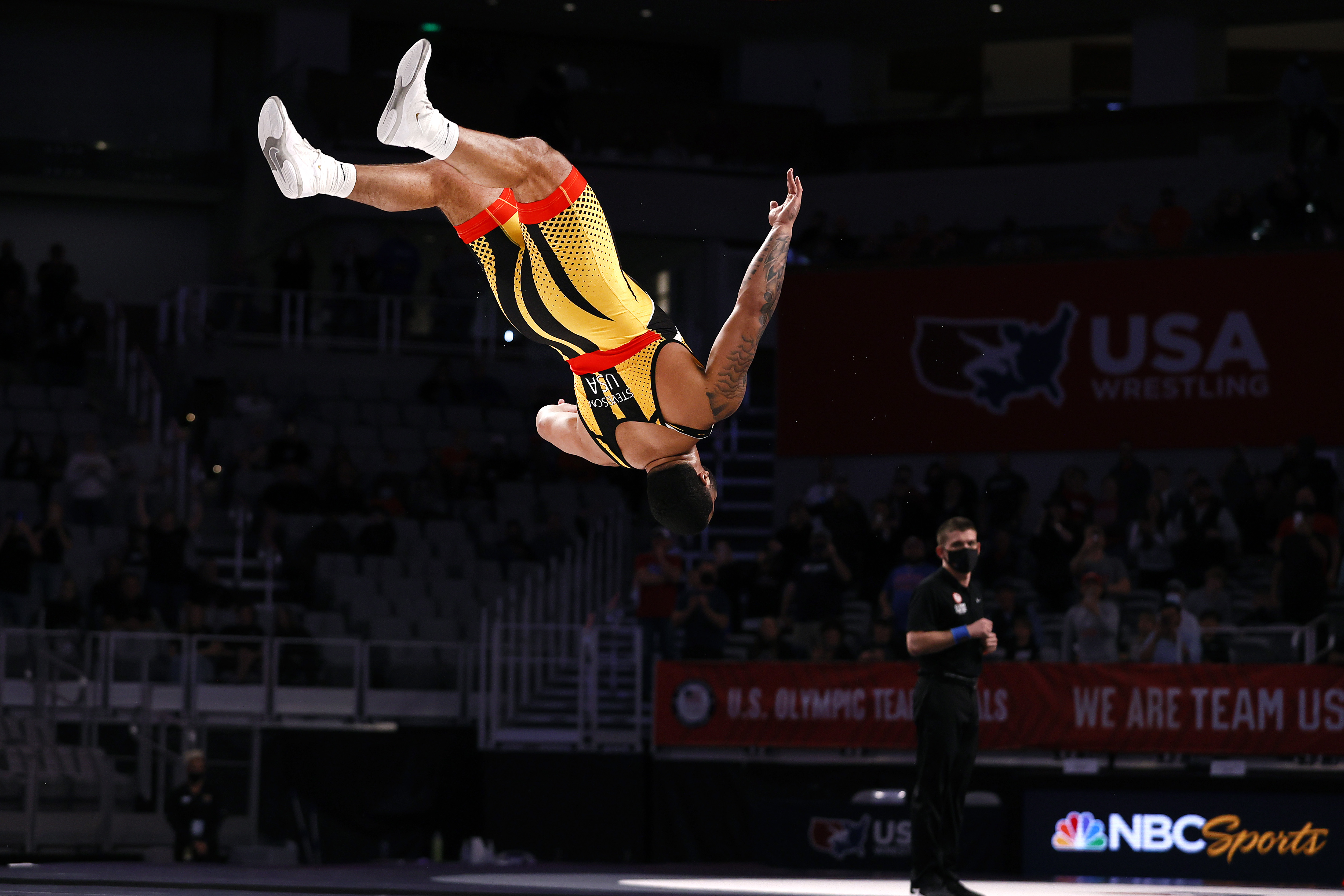 Insights: Stancil began cycling when she was 4 years old. She considers her most monumental memory when she won her first world title in the Netherlands when she was 9 years old. Stancil graduated from Marian University in 2018 with her degree in exercise science.

Accomplishments: In 2015, Stancil placed first in the USA Cycling Collegiate BMX National Championships. In 2013, she earned a gold medal in the UCI Junior BMX World Championship.

Insights: Hegyvary is married to New Zealand Olympic cyclist Rushlee Buchanan and now splits his time between Ashville, North Caroline, and Cambridge, New Zealand. He has citizenship in Hungary and can speak Spanish and French.

Accomplishments: The former Hungarian competitor has earned national titles for both Hungary and the United States. He participated in the 2018 and 2019 World Championships. His top finish was in the 2019 scratch race where he finished in 14th place.

Insights: Stone graduated from Princeton University in 2013. Her full name is Anne-Elizabeth Stone. Her two siblings, Robert and Gracie, also competed in fencing for Princeton. She began fencing at age 9 after her father saw a flier for a fencing club in a pizza restaurant in New York. Stone served as a volunteer assistant coach for the men’s fencing team at Princeton after graduation.

Insights: The Chicago native began riding at the age of 8 after a picture of his mother on a horse sparked his interest in the sport. Farrington grew up skateboarding and now some of his interests include architecture and interior design.

Insights: Griskenas is part of the North Shore Rhythmic Gymnastics Center. Both of her parents have an athletic background. Her father placed first in the World Fitness Championships in 1997 and 1999. Her mother earned fifth and fourth place in fitness aerobics in the World Fitness Championship in 1997 and 1999. Some of her hobbies include practicing calligraphy, writing, reading and dancing.

Accomplishments: Griskenas placed seventh with her team in the 2019 World Championship and eighth in all-around and ball. She was given the 2019 Pan Am Sports NextGen Female Athlete Award. In 2018, she earned the U.S. ball champion and all-around and hoop silver medal.

Insights: Merenzon began gymnastics in 2004. She is part of the North Shore Rhythmic Gymnastics Center and says her favorite events are ball and clubs.

Accomplishments: Merenzon competed with the senior group at the 2017 and 2019 World Championships. In 2019, she was a Pan American Games all-around and 5 balls silver medalist in the senior group.

Insights: Sladkov began gymnastics in 2006. She is part of the North Shore Rhythmic Gymnastics Center and says her favorite events are clubs and ribbon.

Accomplishments: Sladkov competed with the senior group at the World Championships in 2017, 2018 and 2019. She is a 2019 Pan American Games all-around and 5 balls silver medalist in the senior group.

Insights: Zeng began gymnastics in 2007. She is part of the North Shore Rhythmic Gymnastics Center. Outside of the gym, some of her hobbies include reading, cooking, watching television and movies and dancing.

Accomplishments: The 2016 Olympian placed eleventh after competing that year. She has participated in four World Championships earning fifth in ribbon in 2019 and 10th all-around. She became the first U.S rhythmic gymnast to win a medal at an Olympic or Youth Olympic Games.

Insights: The Gurnee native was introduced to judo when she was 4 years old. She and her family run a dojo where she teaches and coaches kids twice a week. Papadakis currently attends College of Lake County where she plans to complete her Associate’s Degree after Tokyo.

Insights: Rusher majored in Human Biology at Stanford University. She was born in London, England, and now teaches sailing in Wisconsin with her sister, Kay. Kay was one of Rusher’s team members at Stanford. Her mother Cindy was a national champion in 1984 and rowed in both 1988 and 1992 Olympics and earned a silver medal in women’s four in 1992. Her father is a member of the Harvard Hall of Fame and was a three-time collegiate national champion as well as a two-time Olympic rower earning bronze in 1988 and1992.

Accomplishments: Rusher was named first team All-America by the CRCA and the Pac-12 All Academic first team. She received bronze at U23 Worlds for the US in the women’s eight and finished fourth in the varsity eight at the NCAA Championships.

Insight: Shea grew up sailing on Lake Michigan with her family and fell in love with being on the water. She joined Chicago Yacht Club's junior sailing program and competed in high school before taking on the Laser Radial 2008 Olympic Trials her senior year. Shea graduated from Connecticut College in 2011 in Political Science where she was sailing team captain and led the group to national rankings.

Achievements: Shea competed in the Laser Radial 2008 Olympic Trials before attending college. She led her sailing team to a 2nd place finish at ICSA Women's Nationals and a 4th place finish at Women's Singlehanded Nationals. In 2009, she was recognized as an All-American Honorable mention and NEISA Sportswoman of the Year in 2011.

Chicago-Area Connection: Plays for the Chicago Red Stars and originally from Naperville

Insights: The Naperville native earned her bachelors and master’s degree from Florida State University. Apart from soccer, she also competed in track and field where she became a two-time state champion in the 800-meter and the 400-meter dash. Krueger is now a defender for the Chicago Red Stars.

Accomplishments: Kruegar was drafted fifth overall by the Chicago Red Stars in 2016. She  was a member of the U.S. U-20 WNT that won the CONCACAF qualifying tournament to go to the 2010 FIFA U-20 Women’s World Cup. In college, she was named to the All-ACC Academic Team during her time at FSU.

Insights: Murphy graduated from the University of California Berkeley in 2017. Some of his hobbies include sailing, home improvement projects and watching sports. His favorite professional sports teams are the Chicago Bulls, the Chicago Cubs and Jacksonville Jaguars.

Accomplishments: Murphy became a gold medalist at the Olympic Games in Rio 2016. He earned gold in the 4x100 medley, the 100-meter backstroke and the 200-meter backstroke. In the World Championship, he’s earned 16 medals total: seven gold, eight silver and one bronze.

Insights: Smoliga represented the United States in the 2016 Olympic Games. She is a University of Georgia graduate, earning her psychology degree in 2017. In 2013, she was named Swimming World Magazine’s Female High School Swimmer of the Year.

Accomplishments: In her 2016 Olympics debut, Smoliga became a gold medalist as part of the 4x100m medley. She also placed sixth in the 100-meter back. On the World Championship stage, Smoliga has earned 15 medals: 12 gold, one silver and two bronze. Her first gold was in 2012 and her most recent was in 2019 in the 50-meter back.

Insights: Dolehide started playing tennis at the age of 5. She was committed to attend UCLA before deciding to play professionally. She comes from a family of tennis players. Her older sister, Courtney, won a NCAA title with her team at UCLA and coached women's tennis at the University of Texas and is currently coaching at Georgetown for men’s and women’s tennis. Her younger sister, Stephanie, is committed to play tennis at West Point.

Accomplishments: In 2017, Dolehide earned first Top 200 singles year-end ranking finishing at number 148 and Top 100 doubles ranking at number 99. In 2018, she had her second consecutive year ranking top 200 singles. Dolehide is currently ranked at number 44 in singles and 164 in doubles. She won two singles titles and four doubles titles on the International Tennis Federation circuit.

Insights: Franklin attended Michigan State University. Before focusing on triple jump, she played basketball in high school. She is the current USATF indoor and outdoor triple jump American record-holder. Some of her hobbies include yoga and modeling.

Insights: A Cook County native, Kendziera graduated from the University of Illinois. He became the 29th Illini track and field athlete to go to an Olympic Games. Apart from track and field, some of his hobbies include playing football, basketball and hockey, watching movies and listening to music.

Accomplishments: Kendziera was a 10-time All-American at Illinois. He is a four-time NCAA medalist. He was recognized in 2017 as Big Ten Track Athlete of the year and was the 2017 Big Ten 400-meter hurdles champion. He holds the Illinois 400-meter hurdles record.

Insights: Morris began competing at a college level at the University of North Carolina. She competed there for two seasons and transferred to the University of Arkansas where she graduated in 2015 with a broadcast journalism degree. Some of her hobbies include filming and editing, singing and playing acoustic guitar and violin.

Insights: McDowell attended the University of Colorado Colorado Springs. He grew up participating in USA Triathlon’s youth and junior elite triathlon circuit as part of the Chicago-based Multisport Madness Triathlon Team. He was USA Triathlon’s Junior Athlete of the Year in 2009 and 2010. He also represented Team USA at the 2010 Youth Olympic Games in Singapore, where he earned silver in the individual event and bronze in the Mixed Relay.

Chicago-Area Connection: Originally from Elmhurst, grew up in Itasca

Insights: The Illinois native graduated from the University of Wisconsin-Madison in 2016. He earned his degree in nautical engineering. Ziemek is a four-time NCAA All-American and became the NCAA Champion in 2016.

Accomplishments: Competing in the decathlon, Ziemek placed seventh in Rio 2016 Olympic Games. In the 2015 World Championship he placed 15th.

Chicago-Area Connection: Originally from Elmhurst, grew up in Bartlett

Insights: Robinson plays outside hitter for the USA Volleyball team. She started playing indoor club volleyball at the age of 10 and continued her volleyball career at the University of Nebraska. She graduated in 2014 and started playing professionally overseas. She highlighted her life as an overseas professional athlete through her YouTube Channel. She is now engaged to professional beach volleyball player, Brian Cook.

Accomplishments: The volleyball player made her debut to the Olympics in Rio 2016 where she earned her first medal. She and her team earned bronze. She has also competed in the World Championship where she most recently placed fifth in 2018. In 2014, she earned gold.

Insights: Jaeschke plays outside hitter. He attended Loyola and left his junior year in 2015 to play for Asseco Resovia, one of the leading teams in Poland’s professional league. At 22, he was the youngest member of the U.S. Olympic Men’s Volleyball Team in Rio de Janeiro.

Accomplishments: In 2016, Jaeschke and his team earned a bronze medal in the Olympic Games. While he was at Loyola, he helped them win the 2014 and 2015 NCAA Men’s DI-II National Championships. He was also named the 2015 AVCA Player of the Year.

Insight: Mensah-Stock narrowly missed punching her ticket to the 2016 Rio Games despite winning the Olympic Trials. She still traveled with the team to work as a practice partner, but now she'll be traveling as an Olympian.

Achievements: Mensah-Stock is the reigning women’s world champion in the 68-kilogram category. She captured gold in the 2019 Pan-American Games and became a Final X champion in both 2018 and 2019. She is also a three-time Senior World Team member and a 2018 Senior World bronze medalist.