‘Mama, Are You OK?' In Waukesha, Minutes of Terror Recounted

Hours before it started, they were already there — people sitting on lawn chairs or wrapped in blankets, awaiting an event the city's mayor described as straight out of Norman Rockwell. The Waukesha Christmas Parade, a tradition in its Milwaukee suburb for six decades, was to be particularly special this time around after its pandemic-related cancellation last year.

Stepping off a few blocks to the east, parade participants were in the holiday spirit, too. Members of the Milwaukee Dancing Grannies, a crowd favorite on the Wisconsin parade circuit, donned white fur hats and waved white pompoms as they danced down Main Street to “Jingle Bell Rock.” Realtors and bankers handed out candy, and the percussion section of a high school band wore Santa hats as they banged drums and clanged cymbals.

As they reveled, a red SUV was also heading down Main Street behind them, moving at a pace far faster than the parade. 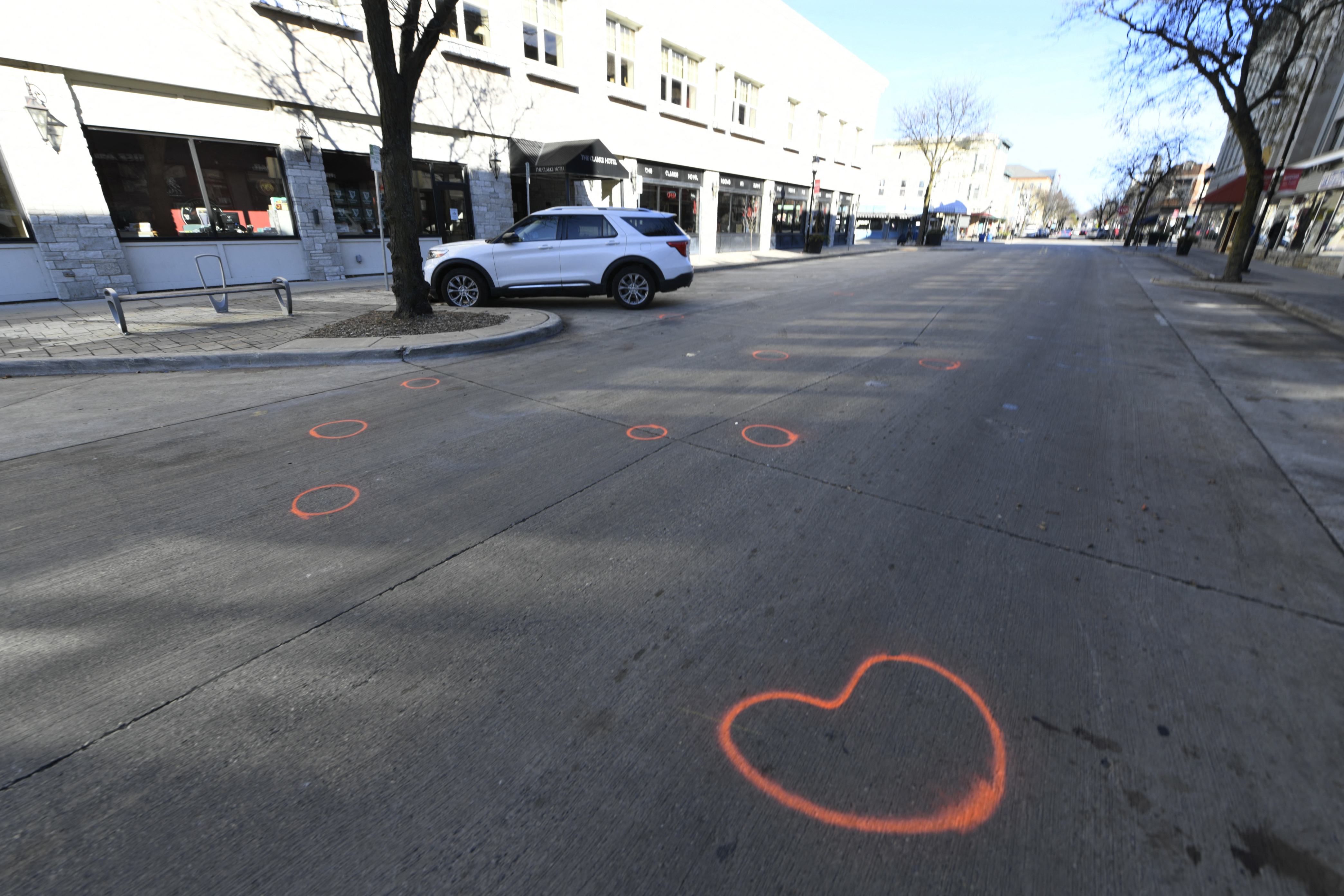 Complaint: Driver Had ‘No Emotion' as He Deliberately Drove in ‘Zig Zag Motion' to Strike Pedestrians at Waukesha Parade 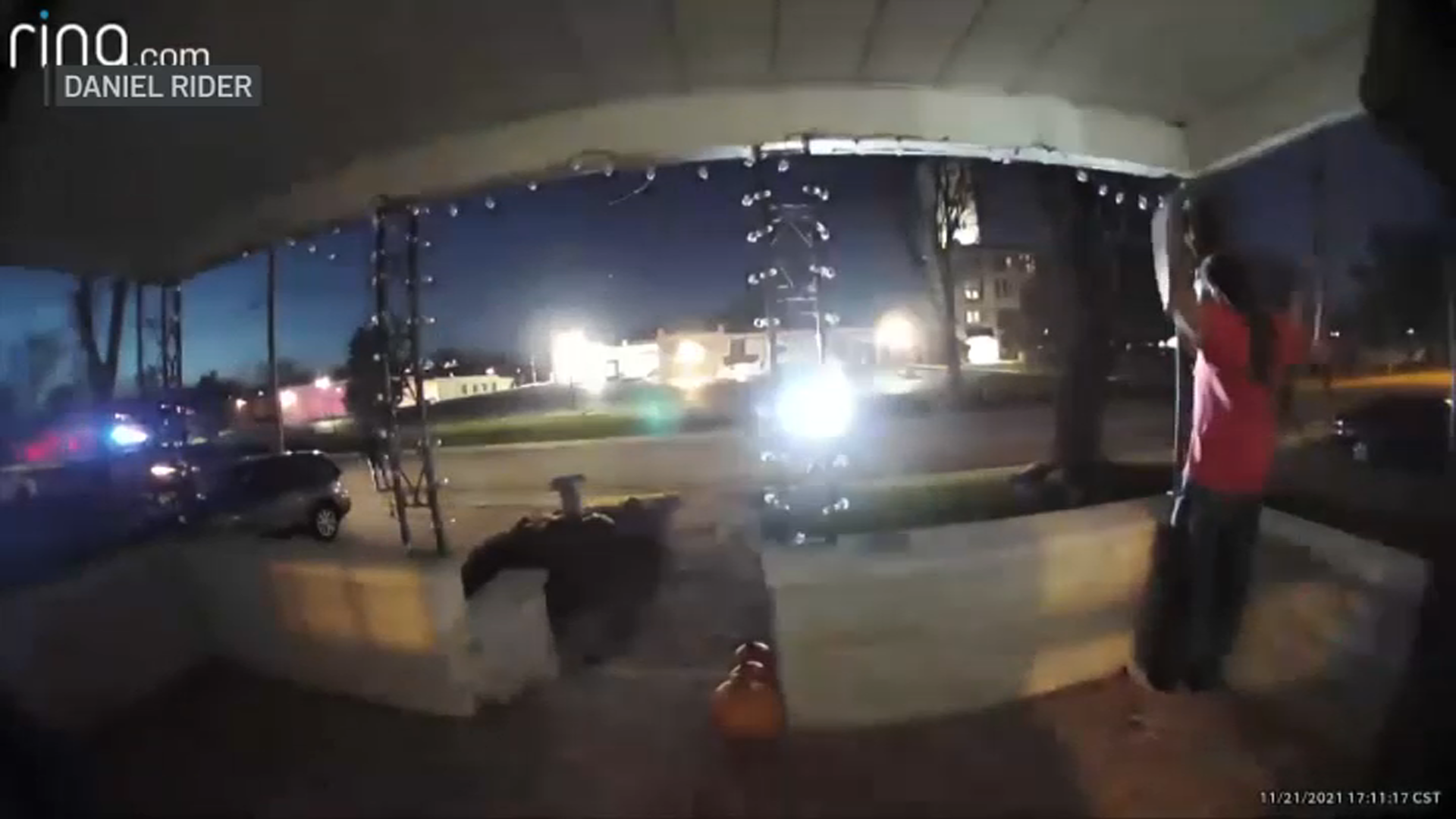 The SUV's driver, police say, had just left the scene of a domestic disturbance that involved a knife. A couple blocks to the east of where the parade started, police say, he drove past a police squad car and barricade and onto the parade route.

For a short time, the driver sped alongside the marchers in a mostly empty parking lane, narrowly missing people both in the parade and along the street, according to multiple videos and witness accounts. Some on the route wondered aloud what was happening. And as police — first an officer on foot, then cars with lights and sirens — followed in pursuit, their alarm grew.

The SUV approached the core of downtown, where sidewalks are wider, tree planters jut into parts of the road and the crowd was more dense. There the vehicle’s path became more erratic — and deadly.

The parade was noisy, and most of the people in it had their backs to the vehicle. So they had no warning before the driver started hitting people, sending bodies flying or crumpling while others fled or rushed to help.

Later, well after the chaos had calmed, authorities said six people were killed and over 60 were injured. How they fared depended on where each person or group was positioned in the parade as the SUV barreled forward. 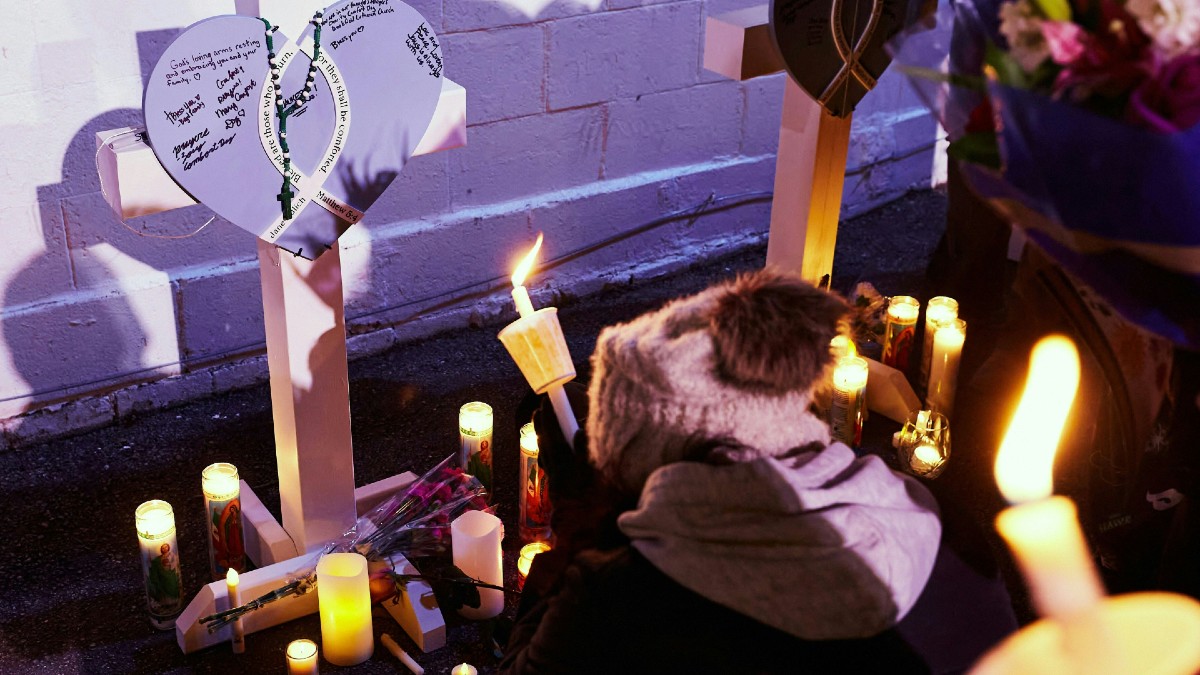 Who Were the Victims in the Wisconsin Christmas Parade Tragedy? 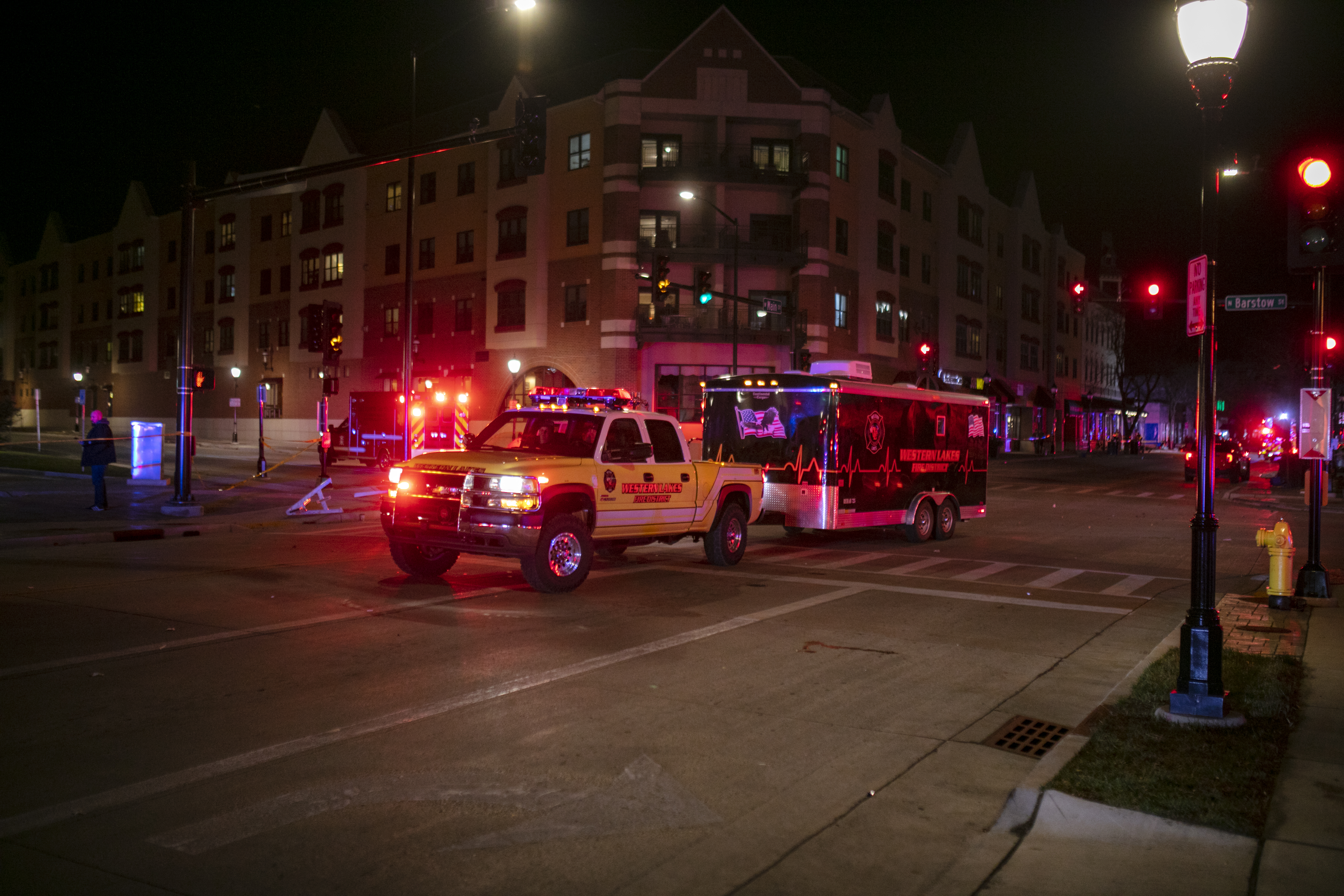 Four of the dead were with the Dancing Grannies — three dancers and a volunteer helper. A woman who worked for Citizens Bank and was walking with co-workers in the group just behind the grandmothers also died Sunday, while an 8-year-old boy died Tuesday from his injuries.

Also among the injured: members of a school marching band, a priest, youth baseball players and young girls in a dance troupe.

Before the SUV hit them, it raced past Margie Dougherty and her friends from the Wisconsin Diamond Dancers a few positions back. One moment they were dancing to the Christmas song “Feliz Navidad.”

And then, the joyous, mingled bedlam of the parade — the drums of different bands, the cheers of the crowd, the recorded music for various dance groups — seemed to just stop. The Diamond Dancers, most of them retired women, stood in the street, confused.

“All of a sudden," Dougherty said, “there wasn’t any music."

In spot No. 49 of the parade, just in front of the Diamond Dancers and a few spots behind the Dancing Grannies, was the RE/MAX Service First parade contingent. Among them: Ken Walter, his wife and their youngest son.

It was at least the 20th time that Walter, 58, a Waukesha native, had participated in the Christmas event. Walter was inside a hot air balloon basket on the back of a RE/MAX van. Occasionally fire would shoot up from the basket and into the sky as if to fuel a massive — but nonexistent — balloon, drawing onlookers' cheers. The arrangement allowed Walter to look backward, behind him, as his group reached the heart of downtown.

That stretch of the parade route is typically crowded with people, Walter says. Participants are closer to the sidewalks, which are wider than the other stretch of Main Street, so people and vehicles are forced to move more slowly.

“I always tell my crew, whoever’s driving, to be careful because everybody’s really close,” Walter said. “There’s not much room between our vehicle and the crowd.”

From his vantage point, Walter watched a red SUV careen into view. It hit a member of the real estate group walking behind the van where his family was riding. “You just knew they were going to hit people not expecting it,” Walter said.

The SUV kept going, narrowly missing the van and a golf cart in front of it. Then, Walter said, it drove straight into members of the Waukesha South High School Marching Band.

On video shot from above, the vehicle is seen plowing into musicians in their Santa hats. It doesn’t appear to slow, even as it leaves bodies in its wake.

Then the SUV drove into a group of youth baseball players and adults as they walked with their club, the Waukesha Blazers. Among those hit were 8-year-old Jackson Sparks and his brother Tucker, 12, who were one of three sets of siblings hospitalized after being struck. Jackson died two days later.

“It’s a parade, so people were laughing and cheering," Walter said. When they heard screaming, he said, they didn't immediately know something was wrong.

Behind the speeding vehicle, though, people yelled. They ran. They searched for family and friends. Amid it all, they were unsure: Were they still in danger? Was there more to come?

“It was like everything went into slow motion, and I couldn’t hear anything,” Walter said.

He hurried his 11-year-old son and a few other children from the real estate group inside a nearby business, frightened by talk in the crowd that someone in the car had also fired a gun. Then he ran back outside to find his wife, Kay, who was trying to treat people hurt when the car hit them. A former intensive care unit nurse and a nurse practitioner, she wanted to do something to help.

“There were these piles of blankets with cops standing over them that you just knew were bodies," Walter said. “(Y)ou see this vehicle going down the road like they’re going over a bumpy road. And you know they’re driving over people. We just watch as it continued up to the other floats in front of us, and we didn’t know how far it went.”

On the sidewalk a block ahead of Walter and his group, Nicole Schneiter watched the parade with her children and grandchildren. They had arrived two hours early to set up lawn chairs at their favorite spot in front of Burlap & Lace Marketplace, halfway along the parade route.

As the Xtreme Dance team, a troupe of girls dressed in black and shaking white pompoms, passed by, Schneiter said to her 6-year-old granddaughter: You could do that someday.

Seconds later, she said, “I just seen a car flying through and just bodies. It looked like dummies being thrown in the air.”

“It took a second to register, like, ‘Is that what we really just saw?’ And then you looked in the road and there were just people laying in the road.”

People began shouting: “Get in the store! Get in the store!” Schneiter grabbed her 9-year-old son and helped her older children get two grandchildren, who’d been sitting in a wagon, into the store. Someone ushered them into a back room. One of her daughters cradled her 6-month-old.

“There was a lady in there freaking out because she was missing a kid. There was another man in there covered in blood that wasn’t his," Schneiter said. "I felt like we were in a movie.”

At least five people were killed and dozens injured when a man drove his SUV into a crowd at Sunday night's Christmas parade in Waukesha, Wisconsin. NBC 5's Kate Chappell has the story of witnesses who experienced the horrifying moments.

Schneiter began receiving frantic messages from her 14-year-old daughter, with a friend’s family on another part of the route. “Mama, are you OK?” her daughter texted. But reception was poor, and Schneiter was unable to reply. Later, her daughter told her she saw a little boy next to her get run over.

As the SUV continued its lethal path, it reached the group from Citizens Bank, most of whom walked alongside a parade float dressed in red ponchos and handing out candy to spectators. Authorities said Jane Kulich, 52, was among those killed. According to local news reports, Kulich worked for a local branch of the bank, which said in a statement that an employee — one it didn't name — was “walking with our parade float” when she was struck and died.

The next victims were with the group of grandmas just ahead. Dead were Virginia Sorenson, 79; LeAnna Owen, 71; Tamara Durand, 52; and Wilhelm Hospel, 81. The three women were members of the Grannies, and Hospel reportedly helped the troupe with their shows.

The Milwaukee Dancing Grannies had posted on their Facebook page earlier that day, excited to be kicking off holiday parades.

“Waukesha here we come!!!” the post read. On Monday, in the aftermath, they posted again, saying the group had been “doing what they loved" by putting smiles on people's faces and “filling them with joy and happiness.”

When those holed up in the store emerged, they found a street filled with the chaotic aftermath — strollers, chairs, candy, random shoes. And bodies.

Yet it remains unclear exactly how the tragedy actually came to an end.

Police have released few details. They do say that an officer tried to stop the driver, Darrell Brooks Jr., 39, of Milwaukee, by banging on the vehicle as Brooks was driving onto the parade route, and another officer later fired three shots and hit the SUV in an effort to stop the destruction. They also say Brooks was taken into custody shortly after the SUV left the parade route near Veterans Park, a grassy area at the end of Main Street where the road takes a sharp left.

Brooks, who was uninjured, has a history with the law, police say, including a recent case in which he was accused of deliberately running down a woman with his vehicle. Police Chief Dan Thompson said he acted alone, and authorities say there is no evidence he knew anyone in the parade or that his actions were any kind of terrorist attack.

Thompson also said police didn't have time to respond to the Sunday afternoon domestic disturbance call before Brooks left that location and drove onto the parade route, ignoring their commands to stop. On Tuesday, he was charged with five counts of first-degree intentional homicide and ordered held on $5 million bond; a sixth homicide charge is expected to be filed for the death of Sparks, a prosecutor said.

Dougherty, the 62-year-old member of the Wisconsin Diamond Dancers, said that before the parade, she and the other dancers had worried aloud about a few potential perils — stepping in a pothole maybe, or slipping on the street’s painted lines.

“It never, even for one second, crossed my mind," she said, “that being in a parade could be tragically dangerous."