In the joint statement, the three officials said that they are working to ensure that the Civilian Office of Police Accountability’s investigation into the shooting is “expeditious and thorough,” and that they are seeking justice and accountability in the case.

To see this young man, who was also a young father, dying in the prime of his life is incredibly heartbreaking. Together, we offer our deepest condolences to the Alvarez family and all those who knew and loved Anthony,” the officials said in the statement. 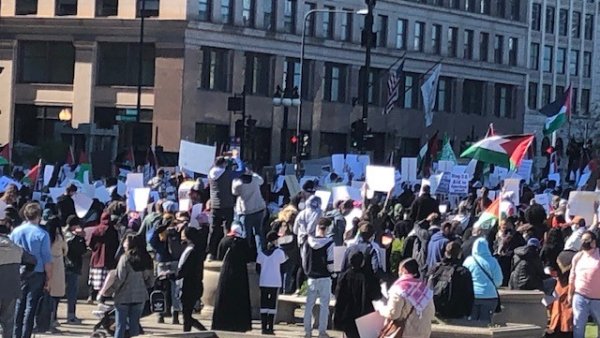 Alvarez was shot and killed during a foot pursuit on the morning of March 31, according to Chicago police. His death, occurring the same week as the fatal shooting of 13-year-old Adam Toledo, once again sparked calls for change in the way that Chicago police handle foot pursuits, something mentioned multiple times by the mayor in both her public statement and comments made at a Wednesday press conference following the release of the footage.

“We all also agree that the CPD must present a revised foot pursuit as quickly as possible. A minor and inconsequential incident should never, and can never again, result in someone’s death,” the statement read.

During a press conference Wednesday, Lightfoot said that the Chicago Police Department is "making progress" on the push she made to revise the department's foot pursuit policies after the fatal police shootings of both Alvarez and 13-year-old Adam Toledo.

Note: Video of the shootingis below. WARNING: The video contains graphic content and may be disturbing to viewers.

Missing Attachment WARNING: The following video contains graphic content and may be disturbing to some viewers. PLEASE NOTE: NBC 5 is not showing the moment Anthony Alvarez is shot. The audio of the scene will continue to play as the video pauses.

"And again, this shooting involved a foot chase. The department is making progress on my directive to revise the foot chase policy. As I've said before, it's one of the most dangerous activities that officers engage in - dangerous for themselves, dangerous for the person being pursued and dangerous for members of the public," Lightfoot said.

COPA has yet to conclude its investigation into the shooting, but recommended that the officer who shot Alvarez be stripped of his police powers pending the outcome of the investigation.

While the Civilian Office of Police Accountability, the agency investigating the shooting, released body-camera footage, surveillance videos, 911 calls and incident reports, several questions remain on what led to the shooting - questions that Lightfoot and Police Supt. David Brown both declined to answer Wednesday.

Police fatally shot 22-year-old Alvarez in the early morning hours of March 31. At the time, police said the incident took place at around 12:18 a.m. in the 3500 block of North Laramie Avenue, where officers were "engaged in a foot pursuit."

Police said that during the pursuit, the person - later identified as Alvarez - "produced a handgun which led to a confrontation" in the 5200 block of West Eddy Street and an officer opened fire, striking him. Alvarez was taken to Advocate Illinois Masonic Medical Center where he was later pronounced dead, officials said.

Footage from the body camera worn by the officer who fired the fatal shots, released Wednesday, shows the officer exiting his vehicle and sprinting past a home and into an alley with another officer.

The video shows the officer, identified in reports released Wednesday as Evan Solano, exit the alley and follow Alvarez as he turns again onto a residential street. About 2 minutes and 12 seconds into the footage, Solano can be heard yelling, "Hey! Drop the gun, drop the gun" as he draws closer to Alvarez and then immediately fires what sounds like five shots.

Surveillance video from outside the home where Alvarez was shot appeared to show him stumble and fall as he rounded the corner from the alley to the street. In the seconds after, the video shows Alvarez appears to have a gun in his right hand just before the officer opened fire. The gun can be seen falling out of Alvarez's hand near the steps of a home as he was shot.

COPA said in a statement on the video release that officers "attempted to stop and speak with Mr. Anthony Alvarez - an individual familiar to the officers" and that he "fled as officers approached, leading to a foot pursuit by the officers."

COPA did not go into further details on the narrative of what happened leading up to the shooting. Surveillance videos taken from multiple angles show Alvarez before the shooting, walking through a gas station parking lot when a police SUV turns on its lights and begins to follow him.

Alvarez can be seen on the surveillance footage appearing to drop a bag as he runs from the vehicle.

NBC 5 reporters have viewed the footage, but cannot independently confirm all elements of the CPD account of the shooting.

When asked about the video at an unrelated news conference ahead of the release Wednesday, Lightfoot demurred but mentioned a "minor traffic offense" she alleged led to the shooting.

"I won't and don't comment on ongoing investigations. Not only is there an investigation by COPA, but as is protocol this matter was referred to the State's Attorney's Office for evaluation. But I will say this. I will say this: We can't live in a world where a minor traffic offense results in someone being shot and killed," Lightfoot said. "That's not acceptable to me and it shouldn't be acceptable to anyone."