A jury on Friday found Kyle Rittenhouse not guilty on all counts in his murder trial connected to the shootings of three people during unrest in Kenosha during the summer of 2020.

The decision comes on the fourth day of deliberations as jurors weighed charges against Rittenhouse, aiming to determine whether he was the instigator of a night of bloodshed in Kenosha or a concerned citizen who came under attack while trying to protect property.

The jury of 12 had deliberated for three full days without reaching a decision.

As Rittenhouse was acquitted on all counts, he at first stood still and silent.

"To say that we were relieved would be a gross misunderstanding," Defense Attorney Mark Richards said while speaking to media outside his Racine office following the verdict. "Kyle is not here. He's on his way home. He wants to get on with his life. He has a huge sense of relief for what the jury did to him today."

Prosecutor Thomas Binger said that while the state is "disappointed with the verdict, it must be respected."

"We are grateful to the members of the jury for their diligent and thoughtful deliberations," Binger said in a statement. "The Kenosha community has endured much over the past 15 months, and yet we remain resilient and strong. We ask that members of our community continue to express their opinions and feelings about this verdict in a civil and peaceful manner." 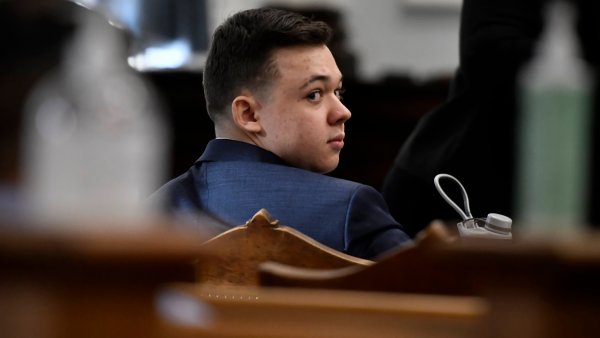 Members of Blake's family said "this is a sad day for justice in America," though many experts said the verdict wasn't unexpected.

"I'm not really surprised from a legal basis," said Attorney Thomas Glasgow, a former prosecutor. "When you take all the politics out of this, this was an extremely difficult case for the prosecution."

Still, experts say many questions linger about decisions made during the trial, including one in which Judge Bruce Schroeder allowed a juror to take instructions home.

"To be allowed to take jury instructions home to me suggests that you're almost encouraging those juries to do their own research, to get online and say, 'Well, what does this count mean and how much time does it carry with?' I'm sure it was all in their mind," said criminal defense attorney April Preyar. "No one wanted to send a 17-year-old boy away for the rest of your life. I'm sure someone in that jury room knew what the sentencing range was, they heard the word, some independent research was absolutely from it."

Thomas Glasgow and April Preyar discuss their thoughts on the jury’s decision that found Kyle Rittenhouse not guilty of charges related to killing two people and injuring a third at protests during unrest in Kenosha in August 2020, describing the verdict “not surprising.”

Rittenhouse was 17 when he went to Kenosha from his home in Antioch, Illinois, in what he said was an effort to protect property from rioters in the days after Blake was shot.

“…Today’s verdict means there is no accountability for the person who murdered our son. It sends the unacceptable message that armed civilians can show up in any town, incite violence, and then use the danger they have created to justify shooting people in the street," Huber's family said in a statement. "We hope that decent people will join us in forcefully rejecting that message and demanding more of our laws, our officials, and our justice system.”

President Joe Biden also addressed the verdict saying "I stand by what the jury has to say."

"The jury system works," he said.