Kyle Rittenhouse's defense team continued to make its case in court Wednesday, calling additional witnesses for testimony and bringing Rittenhouse himself to the stand.

The defense called its first witnesses to the stand Tuesday and testimony continued Wednesday, with many eagerly waiting to see if the Illinois teen would take the stand.

Here are the latest updates as the case unfolds before the jury.

-The defense team says it will likely call three more witnesses to the stand, and the judge in the case indicated that the expectation is that the jury will be able to begin deliberations on Monday.

There had been brief discussion of working through the weekend to wrap up the trial, but the prosecution indicated a desire to finish closing arguments on Monday in the case.

-Kyle Rittenhouse's testimony has wrapped up after prosecutors concluded their cross-examination Wednesday afternoon.

Prosecutors showed several videos, asking Rittenhouse to detail several actions he undertook both leading up to, and following, the shootings. Prosecutors also pressed Rittenhouse on why he didn't render first aid to any of the individuals that were shot, with Rittenhouse saying that he still felt threatened and felt he had to flee the scene to escape imminent danger.

After Rittenhouse's testimony, the defense is expected to call an expert on police use of force to the stand. It is unclear whether there will be any other defense witnesses called.

-The trial is taking a brief break after a discussion between the prosecution and judge over the reliability of images and videos after using the "pinch and zoom" function on an iPad.

Prosecutor Thomas Binger wants to use video to cross-examine Rittenhouse, which depicts aerial video of the shooting scene.

The defense is objecting to this, saying that using the "pinch and zoom" function on such a video would alter the video by inserting additional pixels.

The judge has asked the prosecution to find an expert that can testify as to the reliability of pinched and zoomed video. The prosecution asked for court to be adjourned so such an expert could be found, but the judge did not grant that request.

-- Under cross examination, Rittenhouse talks about trying to get back to his friends at the Car Source store where he felt safe.

He denies that the crowd was hostile to him prior to the shootings.

Binger still being watched by the prosecution and the judge after his previous rebuke. At one point, Judge Schroeder cautions him: “don’t get brazen with me, you know very well an attorney can’t go into these areas when a judge has already ruled.”

Rittenhouse says he brought his gun along for protection, but he didn’t think he would have to use it.

-- Defense will motion for a mistrial with prejudice. That would mean Rittenhouse could not be re-tried. They are citing prosecutorial negligence that would preclude a not guilty verdict. This is being heard before the jury returns.

-- Judge orders a break for lunch.

-- Judge is furious at prosecution and defense threatens a mistrial motion. Prosecutor began going into areas of testimony the judge has already ruled out of bounds. The judge says he expects better of “an experienced prosecutor.”

“You should have come to the court and said can I go into this,” Judge Bruce Schroeder said.

The testimony involves the use of a gun to defend life not property.

-- He says he chose the assault style weapon he used in the attack “because it looked cool.” He denies it was chosen because it looked like a weapon from a first person shooter video game. He also says he never intended to hunt with it.

-- When approached by Kenosha County Attorney Thomas Binger, Rittenhouse admits to using deadly force. He denies intending to kill his victims, saying he “did what he had to do” to stop the threat to his life.

Binger says Rittenhouse is tailoring his story to what has already been introduced. Judge rebukes him calling it a great violation of the defendant’s right not to testify. “You are right up to the borderline if not over it,” Judge Bruce Schroeder cautions Binger.

-- When chased to a group of cars and, he says, threatened by Rosenbaum, Rittenhouse says, “I shoot him." He believes he shot four times.

Rittenhouse then describes running to safety amid shouts from a crowd yelling “get him” and “cranium him.” Rittenhouse says he believed the safest place to be would be in police custody.

Rittenhouse says he was knocked down by man who drop kicked him. He fires but misses. As he gets up from that attack, he says he was beaten by Anthony Huber with his skateboard. He fires once, killing him.

As Rittenhouse is getting up, he says he then sees Gaige Grosskreutz with his weapons and again opens fire wounding him.

-- Rittenhouse breaks into tears as he describes the moments before he shot Joseph Rosenbaum. He cannot speak without crying. Judge halts proceedings for a 10-minute break.

Mother breaks into tears as well. People come to her side to comfort her.

-- Rittenhouse says there was no friction between himself and the other protesters except for “the man who said he would kill me twice.” That man was identified by Rittenhouse as Jospeh Rosenbaum. He said Rosenbaum threatened to “cut his heart out.”

-- Rittenhouse says he lent his bullet proof vest to a friend because he thought he wouldn’t need it because he would be “helping people.” He says the vest was issued to him by the Grayslake Police Department, where he was an explorer.

-- Immediately after he was called to the stand, Rittenhouse was asked “Did you come into downtown Kenosha looking for trouble?” His answer: “No.”

-- Kyle Rittenhouse is called to the stand.

-- On the stand, the owner of Car Source, the dealership that was burned during the civil unrest, has revised his estimates of loss that day. Originally he claimed 137 cars were lost with a value of about $1.5 million. Now he says its closer to $400,000. However, he says he is still not sure.

-- Former roommate of Gaige Grosskreutz testifies Wednesday that a Facebook post he made about Grosskreutz stating he would have “finished the job” and killed Rittenhouse was a total fabrication.

“I made it up,” he said. “Those words never came out of my roommate’s mouth.”

He says he did it because of all the internet harassment. When asked if they wanted to cross examine the witness, prosecutors said "no," drawing laughs in the courtroom.

-- Rittenhouse's attorneys called to the stand Tuesday their first witness - a man who saw Rittenhouse in the moments after he shot and killed three people in August 2020 during unrest in Kenosha.

That witness testified that Rittenhouse was badly shaken after the shootings, at one point telling a person who had joined him in an effort to protect businesses from damaging protesters that “my life might be over,” according to testimony at the murder trial.

“He repeats, ‘I just shot someone’ over and over, and I believe at some point he said he had to shoot someone,” testified Nicholas Smith, who was alongside Rittenhouse at a car dealership in August 2020 and was the first witness called by his defense team as they began their case Tuesday.

-- Another witness in Rittenhouse's group, JoAnn Fiedler, described him as pale, shaking, sweating and stammering after the shootings.

“My god, my life might be over,” Fiedler quoted Rittenhouse as saying. She said he didn’t give any details about what happened but told her he “had to do it.”

Fiedler, the defense witness, was with Rittenhouse outside the car dealership just before the first shooting, and said they were being shouted at and taunted by protesters, including one of the men Rittenhouse later shot. But Fiedler, who said she carried a pistol, testified she never saw Rittenhouse threaten or point his gun at anyone.

“The whole night was quite shocking, but we didn’t really do anything,” Fiedler said of the yelling directed at those guarding the store. “We just kind of stood there. You have to ignore that.”

Fiedler said she later opened the door of the dealership for Rittenhouse after the shootings, and he appeared to be “totally in shock” and fell into her, telling her he had shot someone.

-- With testimony set to resume Wednesday, one question was whether Rittenhouse would testify on his own behalf. Several legal experts said the chance of that appeared to diminish after several witnesses called by the prosecution gave evidence that appeared to reinforce his self-defense claim.

As Kyle Rittenhouse's Kenosha County trial nears an end, will he do as his attorneys suggested he would and testify in his own defense? NBC 5's Charlie Wojciechowski reports.

-- The prosecution rested Tuesday after introducing drone video that offered jurors a new view of Rittenhouse's fatal shooting of Joseph Rosenbaum — the event that sent Rittenhouse hurrying away from the scene, quickly pursued by other protesters who sought to stop him.

The jury watched as the drone video was zoomed-in and slowed down to show Rosenbaum following Rittenhouse, and then Rittenhouse wheeling around and shooting Rosenbaum at close range. A pathologist testified that Rosenbaum had soot injuries that could indicate he had his hand over the barrel of Rittenhouse’s rifle.

But it was unclear from video footage whether Rosenbaum was grabbing for Rittenhouse's gun or trying to swat it away, said the witness, Dr. Doug Kelley of the Milwaukee County medical examiner’s office.

-- Last week, witnesses testified that Rosenbaum, 36, was “hyperaggressive” and “acting belligerently” that night and threatened to kill Rittenhouse at one point. One witness said Rosenbaum was gunned down after chasing Rittenhouse andlunging for his rifle.

-- On Tuesday, Rittenhouse turned his head and averted his eyes from a defense-table monitor as prosecutors displayed medical examiner photographs of Huber’s body laid out on a gurney, a gunshot wound to his chest clearly visible. Rittenhouse breathed deeply as autopsy photos of Rosenbaum showing his injuries were displayed for the jury.

A few jurors also seemed to find it difficult to look for long at the images, with one glancing up at a monitor over her shoulder, then looking straight ahead. 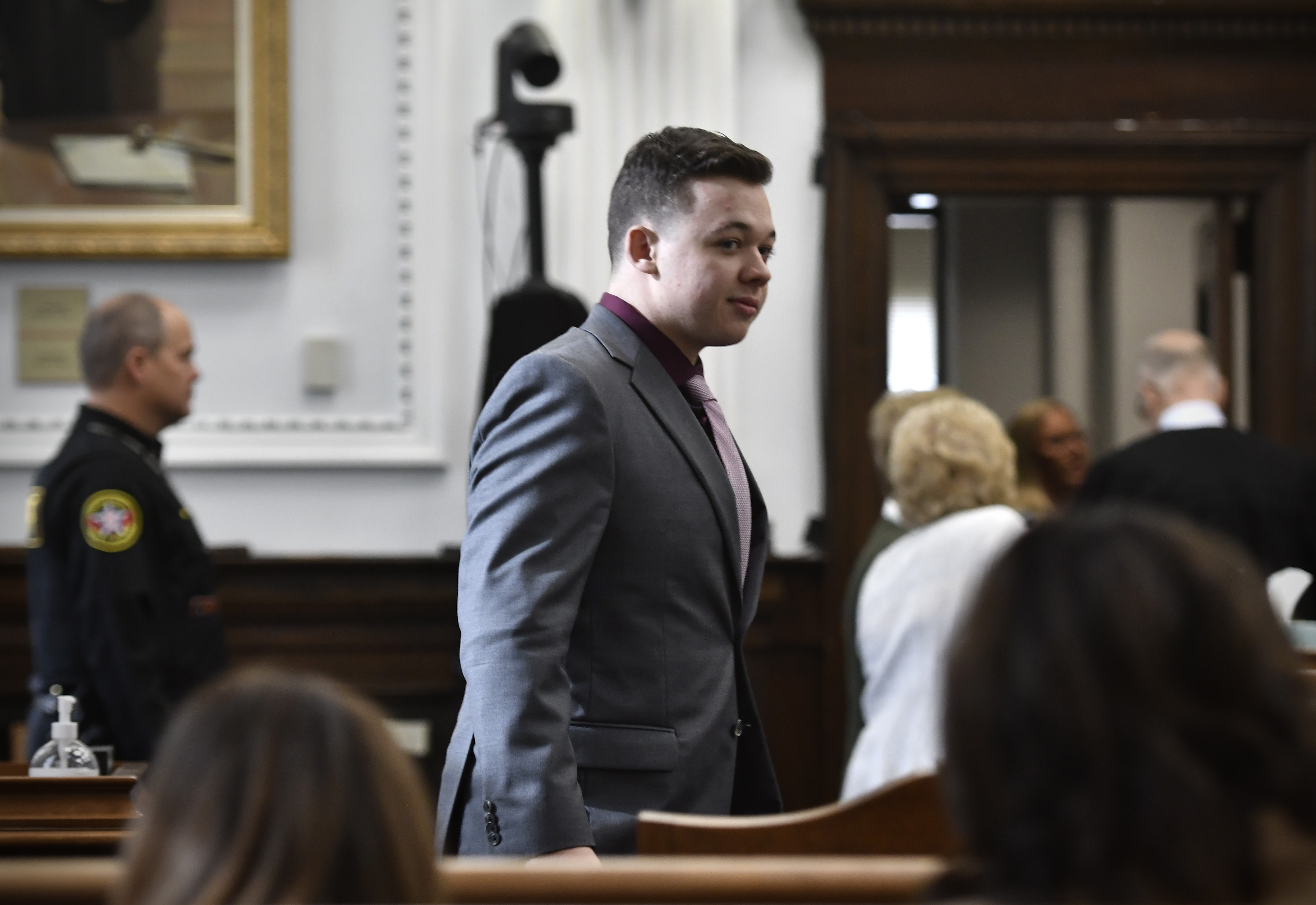