With coronavirus cases still spreading, some health experts are weighing the possibilities of new symptoms and even people who may have none at all.

Illinois remains under a statewide stay-at-home order until April 30 but Gov. J.B. Pritzker has indicated changes are coming. Meanwhile, Chicago Mayor Lori Lightfoot speculates it could be extended well into May or possibly even June. 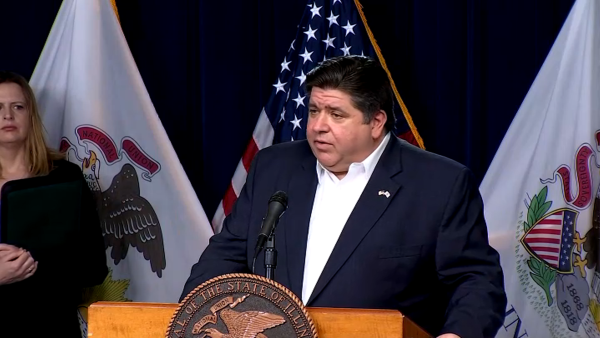 Here are the latest developments on the coronavirus crisis today (April 22):

Chicago's Pride Parade, one of the largest in the nation, has been postponed amid concerns over the coronavirus crisis, marking a first for the parade celebrating more than 50 years in the city.

Parade organizers confirmed the postponement to NBC 5 but offered no new date for the event, which was set to step off June 28. They estimate the parade could be rescheduled for late-summer or early-fall.

Chicago Mayor Lori Lightfoot said Wednesday the city was in talks with organizers about a decision on the event, noting uncertainty around whether large gatherings will be possible in June.

"We have to be guided by the science and data," Lightfoot said.

Organizers for Chicago Pride Fest also decided to postpone their 20th annual event, scheduled for June 20-21, amid the coronavirus crisis.

The two-day event typically held the weekend before the Pride Parade is set to be rescheduled for Labor Day weekend, Sept. 5-6, the Northalsted Business Alliance confirmed to NBC 5.

Illinois is a little more than a week away from the end of the current stay-at-home order, but Gov. Pritzker on Wednesday indicated an extension could be coming. The question is: for how long?

"We're looking at an extension, but I don't know - I can't tell you right now how long that extension should run," Pritzker said during his daily coronavirus press briefing.

Pritzker, responding to a question about whether summer camps will be able to go forward this year, said "an extension of the stay-at-home order into June would directly impact it."

Chicago Mayor Lori Lightfoot on Tuesday suggested the order could be extended well into May and possibly even June.

The state of Illinois is continuing to expand access to coronavirus tests, opening two new community testing sites in Aurora and Rockford this week.

The new cases lift the statewide total over 35,000, with state officials saying a peak still has not been reached.

Wednesday's data showed an increase of 2,049 cases, lifting the statewide total to 35,108 since the pandemic began. There were also nearly 100 deaths in the last 24 hours, bringing the total number of fatalities associated with the virus in the state to 1,565.

Several suburbs require it, Illinois' governor is considering making it a statewide mandate, but Chicago Mayor Lori Lightfoot says there's a reason she hasn't ordered city residents to cover their faces in public.

Lightfoot and Chicago health officials have encouraged and recommended face coverings for those who must leave their homes, but a city mandate has not yet been issued.

"That's a topic that's under a lot of discussion and debate," Lightfoot said Wednesday. "And what I think is this - and I think the governor said this as well and this is consistent with not only the CDC guidance, but the guidance of our Department of Public Health in congregate settings - If you cannot safely social distance, you should be wearing a mask [at the] grocery store. [In] other essential places that people are traveling these days, you should be wearing a mask. And I think a lot of people are doing that.The challenge is making sure that every member of the public has the same accessibility to some kind of face coverage."

Lightfoot said any potential policy needs to be reasonable for people across the city.

A private clinic in Chicago's Lincoln Park neighborhood is now offering coronavirus antibody tests, which the FDA says can help identify who has been infected as well as identify those still at risk.

Innovative Express Care believes it is one of the first clinics in the Chicago area to offer an FDA-approved test to the general public.

Antibodies may provide potential immunity against future infection, and the FDA says results from these tests can also help inform who may qualify to donate plasma to patients seriously ill with COVID-19.

Northwestern University has joined the lengthy list of schools that will scrap their in-person commencement ceremonies this summer due to the ongoing coronavirus pandemic, but the school is still looking to pay tribute to the accomplishments of the class of 2020.

According to school officials, the university will hold its commencement ceremony in a “virtual format,” but promises to conduct an on-campus event to salute graduates at a later date.

“I share our graduates’ disappointment that a moment for which they have worked so hard will culminate in a manner unlike that in typical years,” university President Morton Schapiro said in a statement. “But our Northwestern community is committed to honoring them with all its heart. A virus will not stop the work of Northwestern, nor will it diminish our intention to create a graduation worthy of the class of 2020.”

Dead & Company announced they have canceled their upcoming summer 2020 tour, including two shows at Wrigley Field due to the coronavirus pandemic.

"The well-being and safety of the Deadhead community, venue workers and our touring family is of the utmost importance to us," the group wrote. "We also want to provide you, the fans who've been hit hard financially during this difficult time with your money back. All tickets will be fully refunded at point of purchase."

The DuPage County Fair, which was set to be held July 22-26, has been canceled "due to the current world situation with the Covid-19 pandemic, social distancing and guidelines as it relates to large group gatherings."

The fair's association said it "decided to do the responsible thing" but will work to determine "when and how to continue our 66-year tradition of a county fair."

"These discussions include reengineering what a fair could look like later this year."

Operators of a Joliet nursing home where 26 people have died from the coronavirus believe a maintenance manager may have unknowingly communicated the illness to the facility’s residents when he assembled dining tables in their rooms, without knowing he himself was already infected with the virus.

Dr. Alexander Stemer, who is leading Symphony Care Network’s company-wide COVID-19 response, says that maintenance supervisor later succumbed to the virus himself. Tragically, investigators believe the entire series of events began as Symphony took early steps at the Joliet facility to start distancing residents from each other by closing the dining room, necessitating the assembly of tables for residents to eat meals in their rooms.

“He delivered those 40 tables and installed them in 40 rooms, without knowing that he was infected with COVID-19, and then became ill after the last table was installed,” Stemer told NBC 5. “So, during that time, he became a very active spreader, and possibly a hyper-spreader because the energy of what he was doing may have caused him to breathe a little bit more deeply and a little bit harder.”

Some suburbs have already canceled Memorial Day and Fourth of July celebrations as Illinois continues its battle with coronavirus.

Meanwhile, major Chicago festivals like those celebrating blues and gospel music in the city have been canceled.

A pregnant woman became the first detainee at the Lake County Jail to test positive for the coronavirus, officials announced.

The woman, who is in her 30s, was booked into the jail about 10:30 a.m. April 16, but taken to Vista East Medical Center hours later because she was pregnant and “appeared lethargic,” the Lake County sheriff’s office said. She was diagnosed with a “non-COVID-19 medical issue” and taken back to the jail that evening.

The next day, however, the woman was tested for COVID-19 because she was going through withdrawal, with symptoms that resembled COVID-19, the sheriff’s office said. Her test results came back positive Tuesday morning.

The Illinois High School Association has canceled state tournaments for all spring sports because of COVID-19.

The IHSA’s action comes after Gov. J.B. Pritzker last week closed the state’s public schools to in-person instruction through the end of the academic year.

IHSA Executive Director Craig Anderson says the association, which regulates high school sports in the state, could not conduct tournaments that meet the expectations of member schools.

Mysterious Skin Condition Could be Linked to Coronavirus, Derms Say

Cases of a mysterious skin condition that causes purple, blue or red discoloration in toes and occasionally fingers are popping up around the country, according to Northwestern doctors, leading some dermatologists to wonder if it may be connected to coronavirus.

Dr. Amy Paller, a dermatologist for Northwestern Medicine, said testing is still needed to determine what exactly is causing the condition, dubbed "COVID toes" by dermatologists, but the timing is hard to ignore.

The condition appears similar to pernio, which happens in response to cold, but "COVID toes" brings bright red to purple discoloration and affects broader areas of the toes and sometimes even the bottoms of feet and fingers. Feet can occasionally become itchy, painful or may show no other symptoms besides the discoloration.

The American Academy of Dermatology Association is also asking healthcare workers and physicians to document in a survey if any COVID-19 patients "develop dermatologic manifestations."

Read more about the condition and the potential for skin rashes as a new symptom here.

Symphony has announced that 111 of the 158 patients at a South Shore assisted-living facility have tested positive for coronavirus.

The company made the announcement on Tuesday evening. Officials say the patients are being "aggressively treated" for the virus, but did not offer specifics on how many were hospitalized due to the illness.

Symphony also runs the Joliet facility where 81 patients have tested positive for the virus. A total of 21 residents there have passed away after contracting the illness.