Court records show Mack and Schaefer traded text messages ranging from giddy to tense all the way up to the murder on Aug. 12, 2014. They called each other Bonnie and Clyde and used the phrase “saying hi” as code for the killing, records show.

Heather Mack and Tommy Schaefer are charged with conspiring to kill Mack’s mother, Sheila von Wiese-Mack, in a federal indictment filed in 2017 and briefly unsealed Wednesday in Chicago’s federal court.

Mack and Schaefer are also charged with an obstruction of justice charge in the three-count indictment, which became public as Mack was expected to arrive at Chicago’s O’Hare Airport on Wednesday morning. The indictment was then re-sealed.

The five-page document lists a series of actions by Mack and Schaefer, including an exchange of text messages discussing how to kill von Wiese-Mack and then the killing.

Mack and Schaefer are charged with two conspiracy counts. They also face a charge alleging they “destroyed, mutilated and concealed objects.”

The highly anticipated charges signal a new chapter in an international legal drama that has lasted more than seven years, beginning when the body of Mack’s mother was discovered inside a suitcase left in a taxi outside the St. Regis Bali Resort on Aug. 12, 2014.

Mack and her then-boyfriend, Schaefer, were arrested the next day in Indonesia and sentenced by the court overseas. Schaefer was sentenced to 18 years in prison for battering von Wiese-Mack to death, and Mack was sentenced to 10 years for helping. 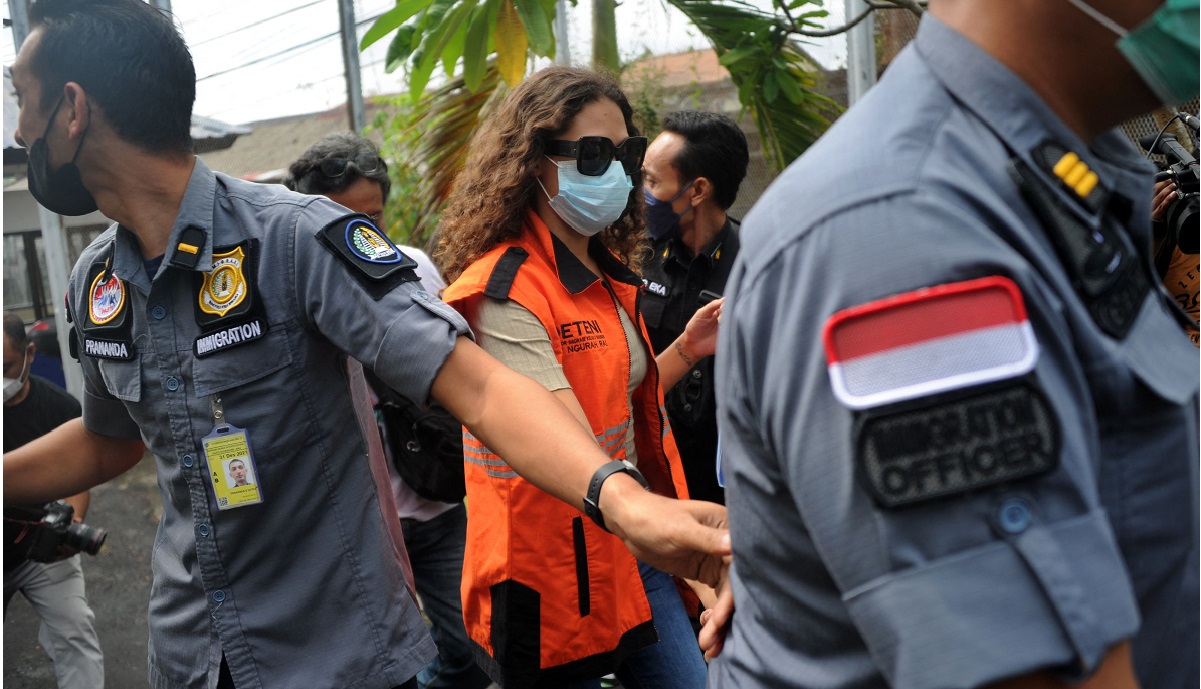 ‘None of This Makes Any Sense:' Mother's Siblings React to Heather Mack's Prison Release US Woman in Bali ‘Suitcase Murder' Freed From Jail

“It’s gonna be a dogfight, because they are being punitive toward Heather,” he said.

Mack gave birth to Stella, Schaefer’s daughter, during the couple’s 2015 trial. Meanwhile, the Chicago Sun-Times reported in August 2015 that the murder had also prompted an investigation by U.S. authorities.

This summer, another attorney who represented Mack in Bali told the Sun-Times he expected Mack’s release from prison in Indonesia in October due to “good behavior.” She was released from the prison last week after serving seven years and two months of her 10-year sentence.

Mack then stayed at an immigration detention center for four days while waiting for her flight tickets and travel documents ahead of her deportation to the United States. Indonesian officials have asked that Mack be banned from the country for life.

Claypool said arrangements had originally been made for Mack to fly into Los Angeles, but he said the FBI contacted Mack a few days ago and told her she would be flying to Chicago.

Though Mack had purportedly asked that Stella, now 6, remain with her foster family overseas, Indonesian officials refused to allow it, saying “minors must be accompanied by their mothers when their mothers are deported.”

“She is just planning to spend time with her daughter because for almost three years, she is not with her daughter,” Mack’s Bali attorney, Yulius Benyamin Seran, told the Sun-Times Tuesday shortly after he said goodbye to his client.

Seran said he was accompanied to the airport in Bali by the husband of the Australian woman who served as Stella’s foster mother while Mack was in prison.

“Everyone was crying because they love Stella,” Seran said.

Claypool said an emergency hearing was held in Cook County probate court Tuesday to make arrangements for Stella to be placed with a temporary guardian in the event of her mother’s arrest. Stella’s foster mother also flew with Mack and Stella to Chicago, he said.

Schaefer’s cousin, Robert Bibbs, was prosecuted in Chicago’s federal court and sentenced in 2017 to nine years in prison after pleading guilty to a conspiracy to commit the foreign murder of a U.S. national. Records show he is due to be released from prison in December 2024, meaning he’s on track to serve slightly more time than Mack has, so far.

Claypool said Tuesday that it “doesn’t matter. You can’t have two bites at the apple.”

Signs have long pointed to a possible U.S. prosecution if Mack returned home, though. Her attorneys even acknowledged the existence of a U.S. grand jury investigation.

Federal prosecutors have said von Wiese-Mack was bludgeoned to death with the metal handle of a fruit stand so that Mack, Schaefer and Bibbs could enrich themselves with the proceeds of von Wiese-Mack’s $1.5 million estate.

Mack’s father was the highly regarded jazz and classical composer James Mack, who died at age 76 in 2006. Oak Park police said in 2014 they had been called to the family’s home 86 times in 10 years.

Court records show Mack and Schaefer traded text messages ranging from giddy to tense all the way up to the murder on Aug. 12, 2014. They called each other Bonnie and Clyde and used the phrase “saying hi” as code for the killing, records show.

About two-and-a-half hours after the text messages ended, the pair took a loaded luggage cart to the resort’s entrance and placed a large suitcase and other items into the trunk of a taxi before re-entering the resort and fleeing the property through another exit.

Von Wiese-Mack’s body was later found in the suitcase placed in the cab by Mack and Schaefer.