Fighting Breast Cancer While Pregnant, One Woman Shares Her Story

One in every 3,000 women are diagnosed with breast cancer while pregnant. Although challenging, doctors want women to know they can fight cancer and keep their baby

As Christine Kump and her husband, Matt, were undergoing IVF to get pregnant at the end of 2020, Christine noticed a lump in her breast.

“I just noticed changes in my breast. Obviously with hormones and stuff, I thought it was from that. And then it just started to feel different, like sometimes I would feel a stinging sensation. I was like, this is not right,” Kump said.

At the beginning of December she found out an embryo transfer had worked and she was pregnant. Three weeks later, she went in for a breast biopsy and learned she had breast cancer.

“I was terrified,” Kump said. “I didn't know if I was going to be able to get treatment.” 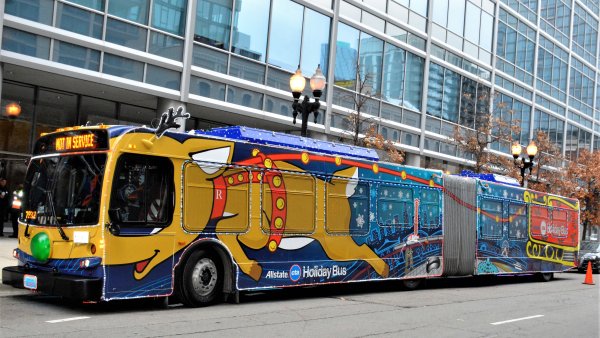 CTA's 2021 Holiday Bus Opens Tuesday. Here's The Schedule, And How to Ride it

Kump met with numerous doctors, including Dr. Dragana Tomic at the Northwestern Medicine Cancer Center in Warrenville, who assured Kump she could carry her baby and get treated for cancer.

Kump’s second trimester was filled with chemotherapy appointments, until her water broke 11 weeks before the baby’s due date, and Vivian was born. She weighed two pounds, 10 ounces at birth and spent 59 days in the NICU, while Christine continued chemo.

“That flew by, because we had so much, so many other things going on that. I mean, not to say she wasn't my top priority, but I was just distracted with getting to chemo and how I felt,” Kump said.

Vivian was finally able to leave the NICU and join her big sister Susie at home in Channahon at the end of July.

One week later, Kump finished her last chemotherapy treatment. She elected to undergo a bilateral mastectomy and reconstructive surgery five weeks later, after learning she had the BRCA-1 gene mutation that made her more susceptible to cancer in the future.

Kump is undergoing radiation now and will have to take a chemotherapy pill for a year, but the mom, 34, says she’s grateful she never had to choose between her health and her daughter.

“It is incredible that she's here and that she's safe and healthy,” Kump said. “She is an absolute miracle.”

Dr. Tomic and the team of doctors that supported the Kump family during Christine’s treatments are happy that both Kump and her baby are doing well.

“To see how brave she was, and how much support she had from her family and her girls so just, it's just beautiful. And she'll be there for them,” Dr. Tomic said.