Rauner, Ives Get Heated in Sole Meeting Before the Republican Primary

Illinois Gov. Bruce Rauner and his conservative GOP challenger state Rep. Jeanne Ives met in their only scheduled face-to-face appearance of the campaign Monday, speaking before the Chicago Tribune editorial board in an endorsement session that saw plenty of disagreements and tension.

Ives - facing an uphill challenge against the incumbent, with far less funding and a bare-bones staff - was on the attack.

The Wheaton lawmaker is a social conservative whose core Republican values may make her more of a primary threat than the governor - a self-funding billionaire with a seemingly endless cash flow - appears to believe. 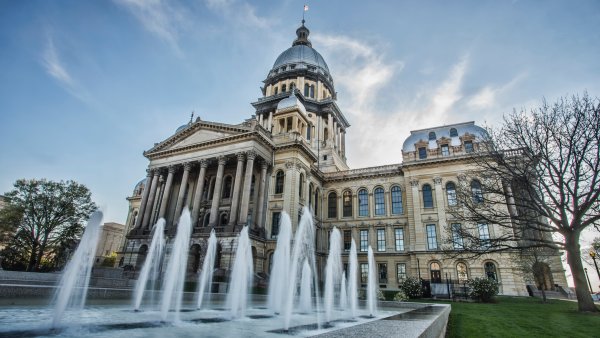 Calling Chicago Mayor Rahm Emanuel Rauner's "wine-sipping buddy Rahm" was just one of many digs Ives landed in the only joint appearance Rauner has agreed to.

"Republicans across the state don't trust him," Ives said, launching attack after attack throughout the course of the 90-minute event, where they clashed on everything from pensions to abortion and where the state is headed.

"He was ineffective, didn’t try to get things done that he could have gotten done," she continued.

Ives jumped into the race largely based on Rauner's signing of House Bill 40, a measure that allows abortion coverage for state employees and Medicaid recipients.

Rauner's signing of the bill was a politically difficult one, and he wavered on the choice for weeks. On Monday, Ives accused him of promising conservatives that he would veto the bill before doubling back on that decision.

"Who lies to a cardinal?" Ives asked, a question Rauner called "outrageous."

"I publicly said that was being explored," he continued, adding, "It was a lot of politics and a lot of pressure. In the end, I had to do what I believe is right."

During his first campaign in 2014, Rauner repeatedly claimed he was running with "no social agenda," even putting his wife Diana, a Democrat, in television ads. Ives hit that claim Monday.

"He sure did have an agenda, it was his wife’s agenda," she said. "Socially progressive agenda from his wife in a state that is broke."

Rauner said that was one of "more false, vicious attacks," to which Ives responded: "It's not false, it's not vicious, I said it nicely."

For his part, Rauner focused largely on the man who has served as his chief political nemesis: Illinois House Speaker Mike Madigan.

"I'm trying to get to get us to change; Madigan so far is trying to block the changes," he said, when questioned about the reforms he promised back in 2014, like term limits and redistricting.

However, Ives did report receiving a $500,000 contribution from conservative donor Dick Uihlein - a former Rauner funder.

"My favorite endorsement right now is from my colleagues, who have seen the debacle that is Bruce Rauner and are standing proudly with me," Ives said.

Not so, insisted Rauner, claiming to "have broad support across the entire political spectrum."

Rauner has focused his campaign messaging largely on presumed Democratic front-runner J.B. Pritzker, assuming that Ives would not be a threat as polling has given him a wide lead. However, after Monday, he may be inclined to rethink that strategy.