EMS workers often do their critical work behind the scenes, but on Wednesday awards were given out to EMS workers in a touching ceremony that united those that have been saved with those that saved them.

For Thomas Marks, who was revived after going into cardiac arrest in 2015, that meant a group hug with the workers responsible for saving him. 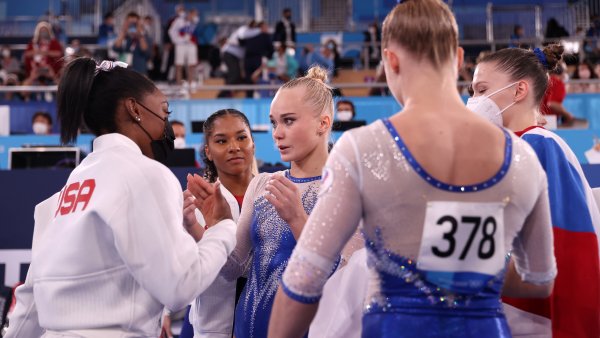 Who is ROC in the Olympics? How Russian Athletes are Competing in Tokyo

Marks’ powerful testimony was part of a ceremony held to honor EMS workers for bravery in the line of duty. The ceremony, which coincides with President Donald Trump declaring this week “National EMS Week,” featured paramedics and other EMS employees who were nominated by their peers and bosses for the awards.

Those honored received plaques and handshakes from their peers and coworkers, but they also got something more noteworthy: a chance to meet the people whose lived they saved.

One of those people was Keeley Barr, who was rescued from a fire last year. After spending two months in a coma and suffering burns on 35 percent of her body, Barr was at Wednesday’s ceremony and thanked the crews from Ambulance 31 and Truck 22 for their efforts to save her.

“You never think it’s going to be you,” she said. “It’s so incredible to be here, and to see what these people do. We’ve got to keep them in our prayers every day.”

Even though it was a day set aside to honor EMT’s, Chicago Fire Commissioner Jose Santiago pointed out that all the pomp and circumstance around their accomplishments wasn’t exactly something they wanted to go through voluntarily.

“They don’t want it. They’re just like regular firefighters,” he said. “They don’t want the accolades, but today we hold them in here, and we say ‘thank you for doing a great job.’”