This region has seen five straight days of positivity increases, with that rate increasing from 3.5 percent to 4.9 percent.

Rates of hospitalizations and positivity have largely stayed the same for this region over the previous nine days.

The positivity rate in the region, which includes Springfield, has gone up from 2.8 percent to 4.1 percent over the last nine days, with seven straight days of increases. Hospitalizations have remained virtually flat.

As it has been for several days, this region is lingering near the 8 percent threshold that would trigger increased restrictions. On July 18 it was at 6.6 percent, and today it’s at 7.3 percent.

This region has seen a significant uptick in positivity rate. The number was at 3.7 percent on July 17, and now it’s at 6 percent.

Positivity rates are still relatively low in this region, but are on the rise, as the rate has increased from 1.7 percent to 2.8 percent in the last nine days. This region is also seeing a slight uptick in hospital admissions.

Hospitalizations have stayed mostly flat over the last week, but the positivity rate has inched up from 4.6 percent to 5.7 percent over the last nine days.

The positivity rate in this region is inching up, but hospitalizations were declining for several days before a slight increase in the last two days.

The positivity rate in this region has gone up from 3.6 percent to 4.7 percent over the last week, according to IDPH figures.

The positivity rate was largely flat and even declining for a while, but has inched up the last few days. We saw an increase in hospitalizations over a span of several days, but that looks like it was a blip, as it’s begun declining again. 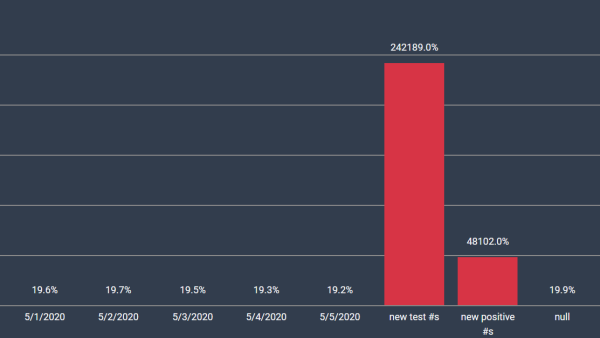