Former Illinois Gov. Rod Blagojevich walked up to the podium outside his Ravenswood home, the first time he appeared beside his family since his prison release, dabbing his bloody chin with a napkin.

"I’m bruised and I’m battered and I’m bloody," he began. "It’s been a long time since I’ve shaved with a normal razor."

He was nearly 30 minutes late for his scheduled "homecoming" press conference, a tardiness his wife Patti blamed on the fact that he "couldn't find" where she put his socks.

With his wife and daughters standing beside him, former Illinois Gov. Rod Blagojevich spoke in front of his residence Wednesday. NBC 5's Mary Ann Ahern was there.

"A lot's changed since I've been here," he said.

Surrounded by dozens of cameras, reporters and supporters - including Cubs fandom icon Ronnie Woo-Woo - Blagojevich went on to thank President Donald Trump for commuting his sentence. The former governor served nearly eight years of a 14-year prison sentence before the president used his clemency powers Tuesday.

Hours after Trump announced the commutation papers had been signed, Blagojevich left a Colorado prison and was home - a free man.

Rod Blagojevich arrived at his Ravenswood home where he was quickly surrounded by cameras, reporters and supporters. He shook hands and even hugged some of his fans. The former Illinois governor had his prison sentence commuted by President Donald Trump Tuesday.

"This is an act of kindness and I also believe it’s the beginning of the process to actually turn an injustice into a justice," Blagojevich said at Wednesday's press conference.

He described the conditions in his prison and what helped him through the days behind bars.

"I spent my first 32 months in prison, nearly three years behind what the inmates called the razor wire - the barbed-wire fence. You can't go near that fence," he said. "If you do, there are prison guards -they're armed with machine guns - who have the discretion to shoot you."

At his first public press conference since being released from prison, Rod Blagojevich describes prison conditions and his life behind bars.

He also shared a message to the Illinois voters who twice voted him into office as governor.

Multiple times throughout the press conference, Patti Blagojevich tapped her husband on the shoulder, saying "dab" as a reminder to wipe the blood from his chin.

Signs of his face, the words "Trumpocrat" and more danced behind him as he spoke.

Shaking hands, hugging fans and even signing autographs, Blagojevich returned to his home in typical fashion after a nearly 20-minute speech.

Attorney and former federal prosecutor Ron Safer said he believes Rod Blagojevich could once again run for officer after his prison sentence was commuted.

Blagojevich was released from prison Tuesday afternoon, landing in Chicago early Wednesday morning. There, he spoke of criminal justice reform and a broken judicial system.

Blagojevich was convicted of trying to sell the Senate seat of then-President-Elect Barack Obama. The former governor has gone through numerous potential appeals and his wife Patti has appealed directly to the president in interviews on Fox News. 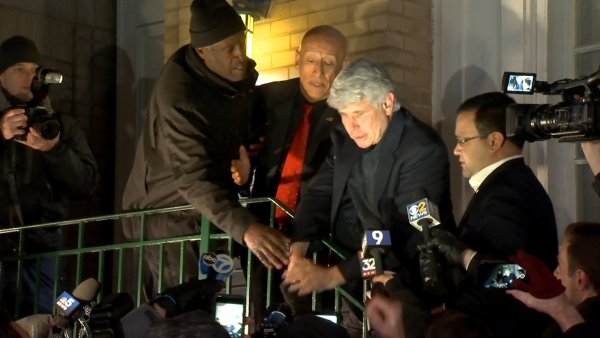 What's Next for Rod Blagojevich After Prison Release?

"How do you properly thank someone who’s given back the freedom that was stolen from you?" Blagojevich said Wednesday. "He didn’t have to do this."