EXCLUSIVE: Blagojevich Has Two Options For Freedom—And One is Donald Trump

For his part, Rod Blagojevich suggested he has fond memories of his brief time in the Donald Trump orbit.

The former Illinois governor says he went home to wife Patti and ruefully asked, “Do you think he’s going to the White House, and I’m going to the sh*t house?”

“I felt they were so determined to get me, they were hunting me and stalking me,” Blagojevich told NBC 5. “I felt they would stop at nothing to do something.” 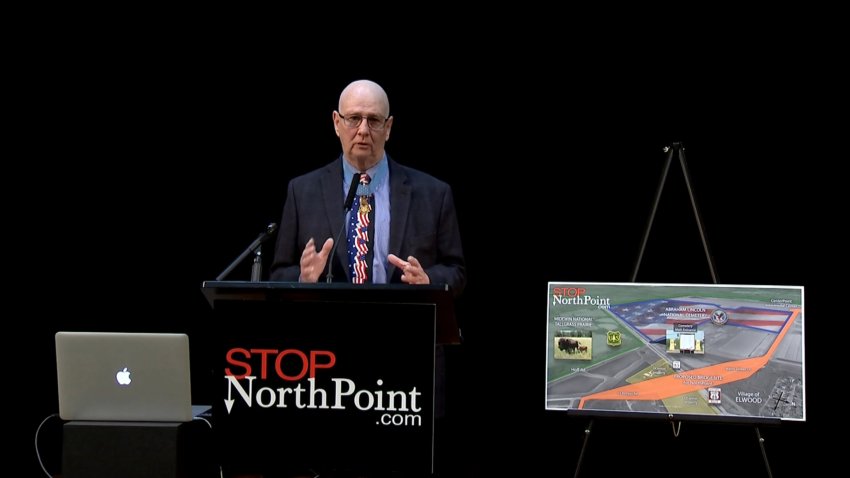 Blagojevich is now serving a 14 year sentence at a Federal Penitentiary in suburban Denver. During two hours of wide-ranging interviews with NBC 5, his first since entering prison five and a half years ago, he spoke of his case, his past, and his future.

That past, just before his arrest, included the whirlwind of the Obama election. And on undercover tapes, he was heard sounding less than complimentary of the new President.

The former Illinois governor now says that in true context, he was actually only frustrated about his own plight.

“It’s a historic election, and good for America, great for America, when an African American can finally be elected to the highest office in the land,” he said. “There are conversations on tape that they never played where I’m talking to my brother about his talent and skill, and how I thought he would be a good president.”

“He was on his way to being president, and I was feeling increasing heat from these people who I felt were determined to get me,” he said. “And if he was going to be sent to the top of the mountain, I was fearful I was going to come crashing to the ground.”

He was right. The FBI came calling just a month later.

Right now, Blagojevich’s calendar holds an official release date of May 2024. But the former governor is preparing to make another run at an appeal to the U.S. Supreme Court. And he still has one other option.

Yes that Donald Trump. The same Trump who famously fired Blagojevich when he was a contestant on NBC’s “Celebrity Apprentice” in 2010. Even though he dismissed the former Illinois governor midway through that season, Trump declared that his famous contestant had “great courage”.

Now, the boss of the boardroom is the leader of the free world. And a Blagojevich commutation petition has been in the President’s in-box since inauguration day.

“Yeah, like who’d of thought?” Patti Blagojevich asks. “That’s like…almost one of those fate things!”

The former Illinois first lady says she believes the President has a good opinion of her husband.

“I mean he said publicly on several occasions that he think’s Rod’s sentence was unfair,” she said. “I feel like if there was ever a president that would do it, and commute his sentence, it would be this president.”

For his part, Blagojevich suggested he has fond memories of his brief time in the Trump orbit.

“About President Trump I’ll say this---he’s been nothing but personally kind to me,” he said, recalling that Trump went out of his way to be kind to his daughters.

“He knew these two little girls were going through a very difficult time based on the things being said about their father, and he took a moment to say kind things to them, to encourage them about their father.”

“I’ll never forget that kindness, and I’ll always appreciate it,” he said. “He’s our president now and I hope he succeeds.”

That said, Blagojevich says he is focusing his hopes on the Supreme Court, not the White House.

“I owe it to the people of Illinois, frankly, to tough it out and to prove to them that I didn’t cross the line,” he said. “It would be easy to accept if I crossed the line, I would have acknowledged it, and I would not have gone through all of this and faced a 14 year prison sentence.”

Though both would of course welcome a commutation and the opportunity it would mean for freedom, Patti Blagojevich agrees that a court decision would mean true vindication.

“We’d prefer that a thousand times over, rather than just the President coming and saying ‘oh your sentence is commuted’, but you’re still a convicted felon and you have all of these convictions and you have to live with this for the rest of your life,” she said. “My daughters want to hold their heads high, being able to know that their father is not a criminal.”

Any approach to the nation’s highest court is, of course, always something of a legal hail Mary. And the timing of a Supreme Court petition can be lengthy.

Trump has no set timetable for ruling on requests from federal inmates. Presidential spokesman Kelly Love would only tell NBC 5 that the White House has “no announcements at this time.”

For now, Blagojevich waits. He sees his family, on average, three times a year. And insists he is optimistic about the future.

“I would do a shout-out to my fellow underdogs, that are facing powerful forces among us,” he says. “Don’t ever quit. Even if you hit rock bottom, as I have, put faith over fear, you’ve got to go through the fire. Run with patient endurance in the race that’s set before you, and if you have to, take a stand.”

“Even if the world misunderstands you, criticizes you and says you’re crazy, take a stand. Because you know what the truth is. And when you do it, my experience tells me, trust in God. You’re not alone. You never go alone. Put your faith in Him.”