At-Home Kit Limits, Long Lines: What to Know If You Need a COVID Test Before the Holidays

COVID testing sites are in high demand as the holidays approach and cases surge in the Chicago area and across Illinois - and that trend is expected to continue even after the holidays.

Lines Wednesday stretched outside many locations both in the city and suburbs and drive-up sites reported longer-than-normal wait times.

Amita Health said it is doing 3,000 tests per week, twice what it saw last summer, and Northwestern Medicine said it has seen a 23% increase in testing at its immediate care facilities. 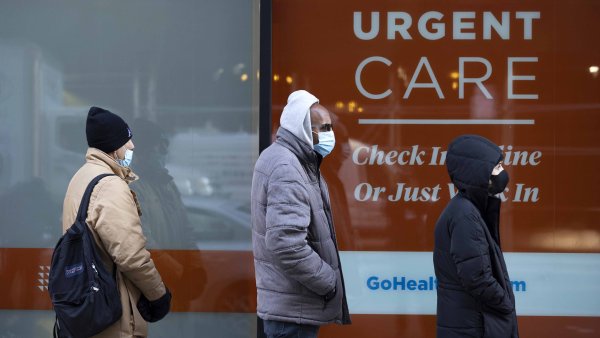 What Should You Do If You Test Positive for COVID or Were Exposed to Someone Who Has?

Even at-home tests, such as ones found at pharmacies, are getting harder to come by.

Walgreens reported this week it was seeing "unprecedented demand" for tests and placed a four-item purchase limit on at-home COVID testing kits in stores and online. It warned of temporary shortages of such tests at many stores.

"We continue to offer access to lab-based testing with results available in 1-2 days or rapid COVID-19 testing at more than 4,800 CVS Pharmacy locations nationwide," the company said in a statement.

CNBC reported that Amazon won't let its shoppers purchase more than 10 of its at-home test kits as of Wednesday. A spokesperson said the company is experiencing inventory shortages of some tests because of increased demand.

To address potential shortfalls in supply following the Christmas and News Years holidays, President Joe Biden announced that his administration has purchased a half-billion at-home rapid COVID tests, which will be made available next month and will be sent to Americans through the mail.

“We'll be getting this test to Americans for free and we'll have websites where you can get them delivered to your home," Biden said during an address Tuesday.

Pop-up testing sites are being reported in the lead-up to the holiday to address the surge in demand.

In Chicago's 14th Ward a free "walk-up nasal COVID-19 testing" will be available from 11 a.m. to 5 p.m. Thursday for residents. Those looking to get tested can go to 10402 S. Western Ave. and results will be emailed within 48 hours.

In Kane County, more appointments were made available at the Kane Vax Hub through January.

Dr. Michael Daignault, an ER physician and chief medical advisor for Reliant Health Services, said testing is part of a critical multi-pronged approach that residents can use to stay safe during the holidays.

“Nothing is 100%, but if you add up all the layers together, including vaccination, testing and good ventilation in the places you gather, I think that’s the best thing we can do,” he said.

Still, Illinois' top doctor cautioned against overconfidence following a negative COVID test ahead of the holidays.

"I know there's a lot of testing going on because people are trying to be safe," she told NBC 5 Wednesday. "They're not trying to expose their loved ones, vulnerable loved ones, older people, immunocompromised people, so they're trying to get tested trying to know their status. I want to caution people that when they're doing those rapid tests, that's only giving you a snapshot for that day. So even if you're negative on one day, that doesn't mean that you couldn't have converted the next day or the next so for these extended stays with family members, you know, you have to keep testing if you're going that route. But of course be vaccinated, wear your mask if you're not sure, didn't have the opportunity to test and you know, you want to add that extra layer of protection for someone who's super vulnerable."