What Still Needs to Happen for Illinois and Chicago to Lift Their Mask Mandates?

Illinois' indoor mask mandate could soon be lifted, but experts say the state isn't quite ready yet.

"Make no mistake Illinois, today is not the day to stop the mask mandate," Dr. Emily Landon, an infectious disease specialist for the University of Chicago Medicine, said during a press conference with Gov. J.B. Pritzker this week. "And that's why it's not happening today."

The state's mask mandate is expected to be lifted, officials announced Wednesday, but not until Feb. 28. So why the wait?

Health experts said numbers still need to drop, but with the current trajectory, they should be low enough by the end of the month to lift mandates.

Officials did not give a specific metric that must be met in order for the mandates to lift, only saying "if these trends continue" as expected, that the statewide indoor mask mandate, with the exception of schools and federally-required places, would be lifted come Feb. 28.

"There are still way too many cases, but things are changing quickly, they're improving," Landon said. "Many have asked for a metric or a number that will guide the rules and regulations, but each wave of this pandemic has had different characteristics, different behaviors, and no single metric has been able to reliably predict the outcomes and the trajectory of each of the variants. Smart physicians, scientists, epidemiologists and public health officials are going to disagree about which metric to use and the exact date to repeal mandates and rules. This kind of discourse is good. It shows that we have a diverse community of experts that are considering all the angles and the one thing that we all agree on is the need to aggressively respond to new threats on the horizon with precautionary measures. And then once our modelers and epidemiologists are able to reliably predict future trajectory, we have to begin then to shape a strategy for undoing some of those mitigations and mandates. Preparing to repeal statewide masking mandates at the end of the month is aggressive and optimistic, but it's also reasonable."

Pritzker noted that the state is "seeing the fastest rate of decline in our COVID-19 hospitalization metrics since the pandemic began." Those numbers must continue to decline for the state to carry out its plan to lift the mandate on Feb. 28.

Chicago has also said that it will align with the state in lifting its masking and vaccination requirement if its numbers also continue in their current downward trajectory.

"CDPH is watching four primary community transmission and risk metrics, and when 3 of the 4 reach 'Lower Transmission Risk' and stay there for one full incubation period (two weeks), we would begin to lift restrictions," the city's health department said in a statement.

Illinois is currently averaging about 2,500 COVID hospitalizations, marking a 66% drop from the nearly 7,300 seen during the peak of the omicron surge last month. The number of daily patients requiring ICU care has also dropped 63% in that time and 20% of state ICU beds are now available, marking an increase from the 8% reported four weeks earlier, the governor said.

The governor said that hospitalization reductions would be key to removing the mandate.

In Chicago, the current metrics include: 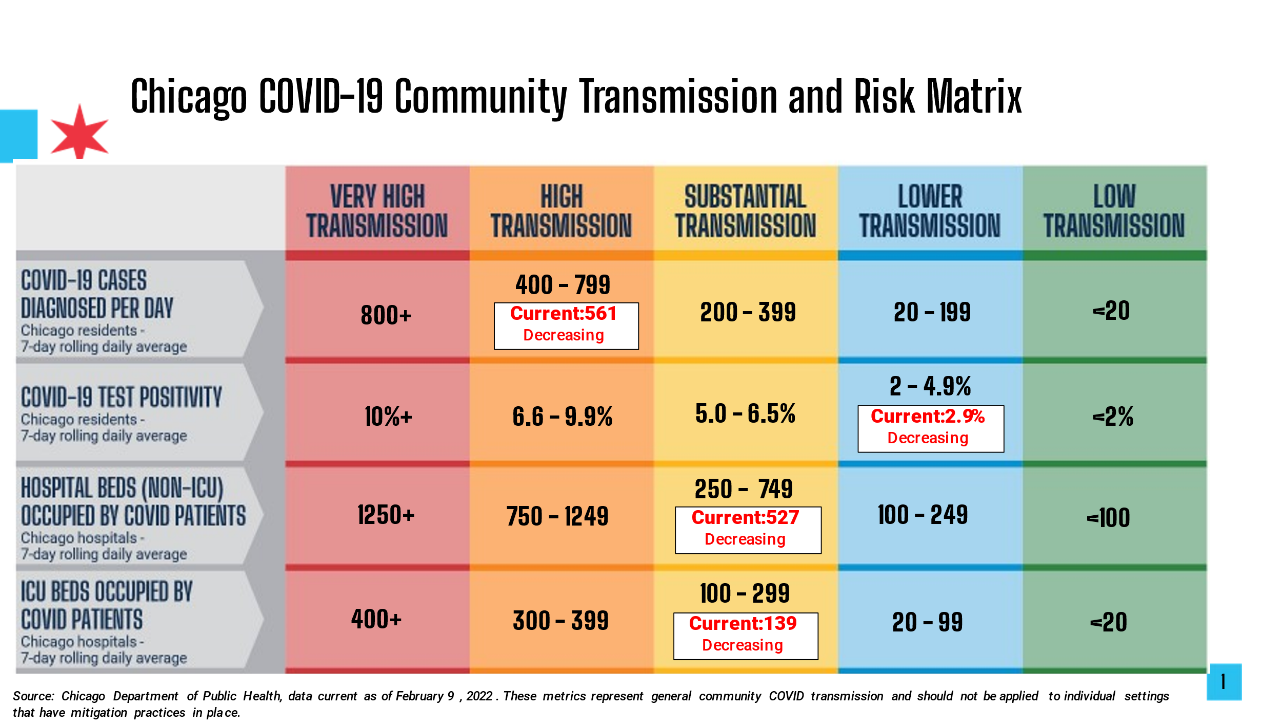 There is one important caveat to the state's plan.

"I want to be clear: Many local jurisdictions, businesses and organizations have their own mask requirements and other mitigations that must be respected," Pritzker said. "Having stricter mitigations than the state requirements is something that must be adhered to. Doing what’s right in your private business or for your local communities is encouraged. Whether you’re a business, a township, a venue, a place of worship or a city – to name just a few examples – protecting your patrons and visitors is no doubt a high priority. Masks continue to be a very effective way to keep your establishment from experiencing an outbreak or spreading the disease."

Chicago's health department also noted that many may continue to wear or require them.

Masks will also still be required under certain federal guidelines.

"While masks will no longer be required and most indoor locations beginning Monday, Feb. 28 I want to be clear that they are still highly recommended," she said.

According to the governor's office, Illinois will continue to require masks in the following settings:

The lifting of the mandate will also not apply to schools, Pritzker said.

"School outbreaks impact hundreds, even thousands of people across a community – and there are a whole lot more infections when districts are maskless. Schools are unlike most other environments — there are far lower vaccination rates for school-aged children than adults, higher exposure daily to younger children who aren’t yet vaccine-eligible, and more difficulty maintaining distance in hallways and gyms. The equation for schools just looks different right now than it does for the general population. Schools need more time – for community infection rates to drop, for our youngest learners to become vaccine eligible, and for more parents to get their kids vaccinated."

The governor said plans for school masking requirements are expected to be announced "in the coming weeks."

"It’s my hope and expectation that we will continue making progress to a place where we can remove school masking requirements and keep kids in school," he said.

The most recent development comes as Pritzker continues to fight a legal challenge to his mask mandate for Illinois schools. A temporary restraining order was issued last week by a judge in Sangamon County that prohibited certain school districts from enforcing the requirement.

The ruling does not apply to locations like Chicago, which are under union contracts. District officials and teacher union leaders have said that masking requirements will remain in place in Chicago Public Schools classrooms despite the ruling. 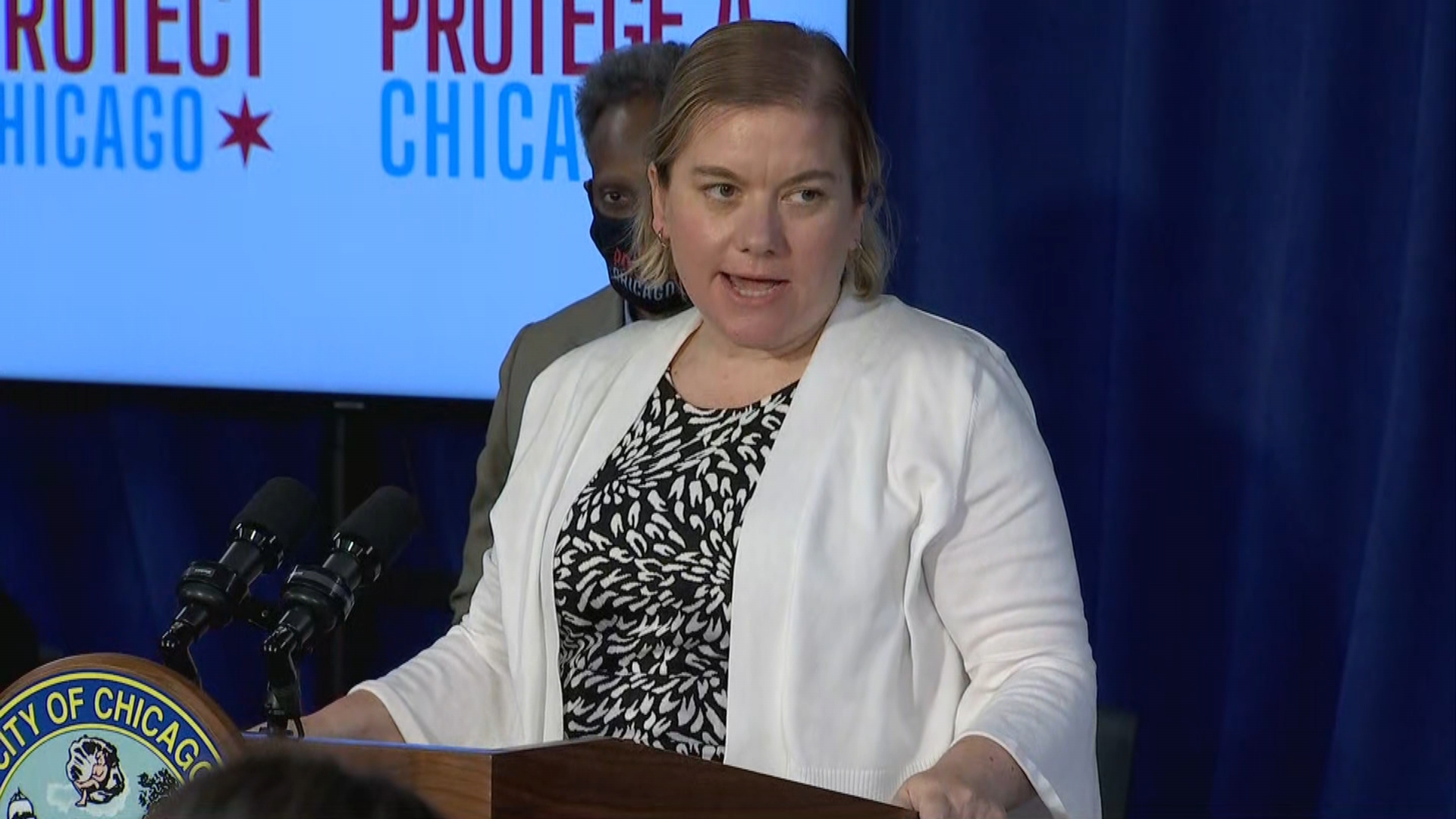 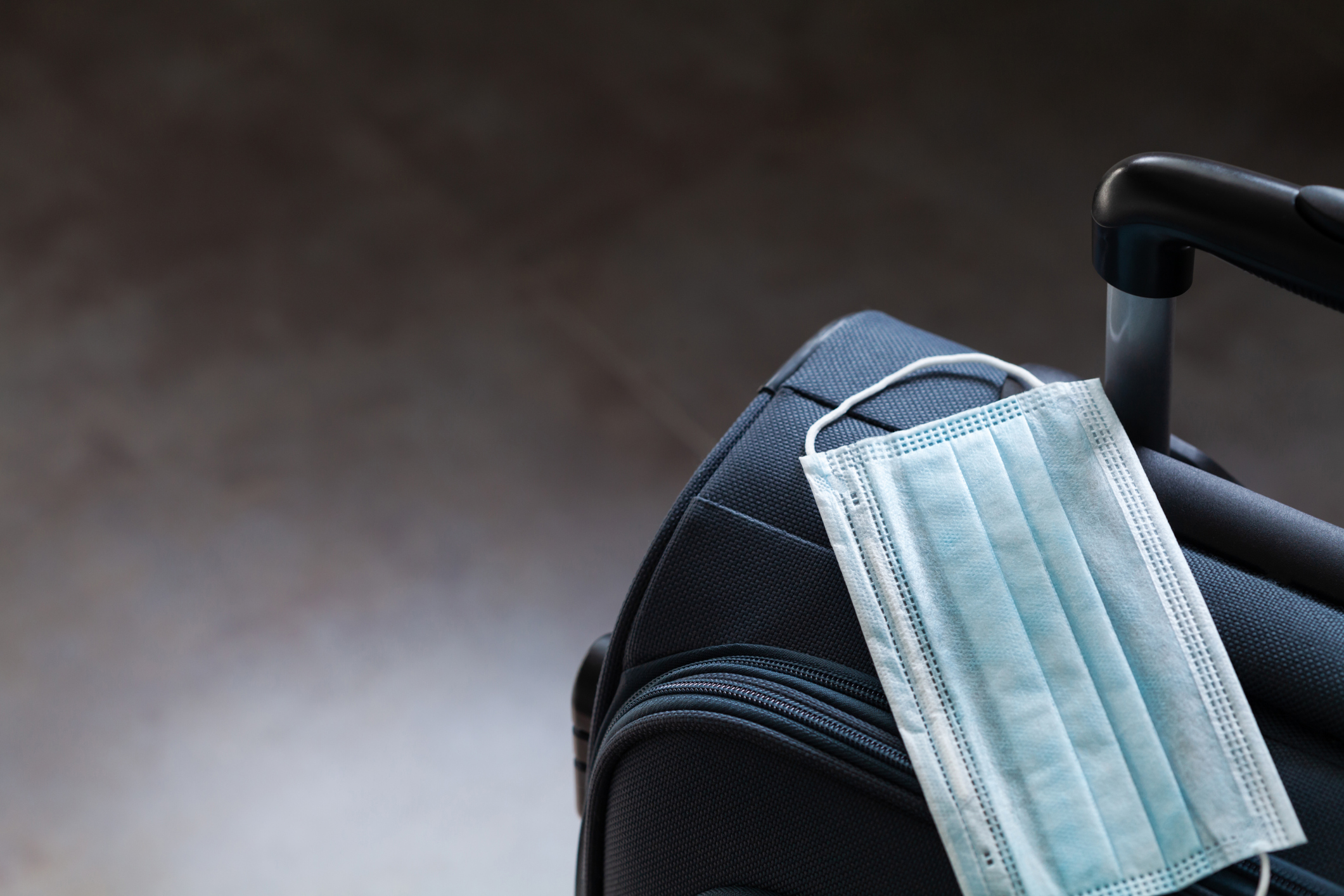 Illinois Mask Mandate: Where Will Facial Coverings Still be Required After Mandate Ends?