Although coronavirus hospitalizations are falling across the United States, virus-related deaths have remained stubbornly high, with 50,000 new fatalities in the last two weeks alone. California has contributed the most to the toll, averaging more than 500 deaths per day in recent weeks.

Meanwhile, Johnson & Johnson applied for emergency use authorization for its coronavirus vaccine candidate on Thursday. Its vaccine, which is 66% effective in protecting against the virus, could become the third shot approved in the U.S.

The United States has reported more than 26.8 million coronavirus cases and 460,000 deaths since the start of the pandemic, according to a tally by NBC News.

Gov. Ralph Northan announced Friday that the COVID-19 variant from South Africa has been detected in a case in Virginia, NBC Washington reports.

The strain was identified by a private lab, Northam said. He didn’t immediately note where the patient lived or if they have a recent travel history.

The South African variant – also known as the B.1.351 variant – has not been shown to cause more severe illness or increased risk of death when compared to other strains, the Centers for Disease Control and Prevention says. However, the variant could be more transmissible than other strains.

Coronavirus Cases Drop at US Homes for Elderly and Infirm

Coronavirus cases have dropped at U.S. nursing homes and other long-term care facilities over the past few weeks, offering a glimmer of hope that health officials attribute to the start of vaccinations, an easing of the post-holiday surge and better prevention, among other reasons.

More than 153,000 residents of the country's nursing homes and assisted living centers have died of COVID-19, accounting for 36% of the U.S. pandemic death toll, according to the COVID Tracking Project. Many of the roughly 2 million people who live at such facilities remain cut off from loved ones because of the risk of infection. The virus still kills thousands of them weekly.

The overall trend for long-term care residents is improving, though, with fewer new cases recorded and fewer facilities reporting outbreaks. Coupled with better figures for the country overall, it's cause for optimism even if it's too early to declare victory.

Manning says the U.S. is also investing in six manufacturers to develop at-home and point-of-care tests for the coronavirus, with the goal of producing 60 million tests by the end of the summer.

Manning says, “The country is well behind where we need to be in testing,” and the new contracts will help boost supply.

Manning expects the nation will produce more than 1 billion gloves a month by the end of the year.

The developers of AstraZeneca’s coronavirus vaccine say the shot appears to work against the variant detected in Britain late last year.

It’s similar to previously reported results by other vaccine manufacturers, including Pfizer and Moderna.

Andrew Pollard of Oxford University, which helped develop the AstraZeneca vaccine, says the shot also appears to reduce the amount of virus in people infected with COVID-19. That could potentially slow the disease’s spread. The research hasn’t yet been published in a peer-reviewed journal.

Sarah Gilbert of Oxford says it should be straightforward to tweak their vaccine to account for the variant detected in the U.K. She says vaccine manufacturers could quickly insert a new gene sequence from the variant into the virus needed to make the vaccine. Gilbert adds scientists are already in talks with regulatory agencies about how they might quickly authorize any new vaccine. It’s a similar process for seasonal flu vaccines.

Also, researchers are studying the potential effectiveness of the vaccine against the variant that arose in South Africa.

As COVID-19 spread across the country and local governments instituted restrictions and closures to keep infections from rising, fitness studios and gyms were often the first and hardest hit. Now, almost a year since Congress passed its first coronavirus relief package to help struggling Americans get back on their feet, one sector feels largely abandoned.

“Gyms are the forgotten pieces. We talk about payroll protection programs and restaurants and everyone kind of understands that because everyone goes to restaurants and bars,” Dale King, owner of a CrossFit gym in Portsmouth, Ohio, told NBC News in a phone interview.

Nearly half of all fitness studios around the country are expected to close their doors permanently if they don’t receive the needed relief. In a last ditch effort, thousands of small gym owners are asking Congress for billions in funding so they can make payroll, pay rent, and implement changes to comply with COVID-related restrictions.

The Health and Fitness Recovery Act, which is expected to be re-introduced in the House in the next few weeks, would establish a $30 billion fund to “provide structured relief to health and fitness service establishments.”

Two days after a Southern California school district returned to hybrid-model in-classroom teaching, 81 students and 18 staff members have been forced to quarantine after seven people in four of the schools tested positive for COVID-19, NBC San Diego reports.

Six of the positive cases came from elementary schools and one was at a middle school in the Escondido Union School District.

The district’s superintendent said the positive cases and quarantines are not unexpected.

“Any time you get one case, of course, it’s alarming," Superintendent Luis Rankins-Ibarra said. "But we’ve got protocols in place and the quarantines occur as a precautionary measure."

The quarantines are likely to re-ignite the debate on the return to in-class teaching. In fact, Escondido Elementary Educators Association president Romero Maratea said the quarantines raise a tremendous concern.

“Our concerns about reopening now, which we expressed to the school board and superintendent, were primarily a result of the prevalence of the virus in Escondido as compared to other areas of the county," Maratea wrote in an email sent to NBC 7. "The numbers have spoken for themselves."

British officials say everyone arriving in the country from coronavirus hot spots will have to spend 10 days in hotel quarantine starting Feb. 15 in a bid to stop new variants of the virus reaching the U.K.

The government is facing criticism for the delay in implementing the policy, which it first announced in late January.

Arrivals from high-risk countries will have to quarantine in approved hotels patrolled by security guards, and will be billed for their stay. The U.K. says it has sought advice from Australia and New Zealand, where quarantine hotels have been used to contain COVID-19.

The main opposition Labour Party said Friday it was “beyond comprehension” that the policy was being introduced so late, 50 days after a new, more transmissible strain of the virus from South Africa had been identified. Labour borders spokesman Nick Thomas-Symonds said the government was doing “too little, too late.”

A group of more than 100 volunteers in Florida is helping seniors navigate the technology-heavy process of getting a COVID-19 vaccine. The volunteers stepped in after seeing the chaos and confusion that erupted when the state opened up vaccine eligibility for residents 65 and older.

Currently there are about 3,000 seniors waiting for one of the 120 volunteers to help them. To boost its efforts, the group is also encouraging technology-savvy young people to pitch in and help their older relatives navigate online systems.

The stadium, which will accept only Bronx neighborhood residents, expects to vaccinate about 15,000 in the first week, NBC New York reports.

US Officials Mull Sending Masks to Each American

Biden administration officials are weighing sending masks to every American as they hope to nudge individuals to do their part in lowering coronavirus transmission rates.

White House chief of staff Ron Klain said in an interview with NBC News that administration officials are looking at using mask supplies that the government already has in its stockpile.

Klain said that the administration hopes to make an announcement on a potential move “in the next few days or next week.” 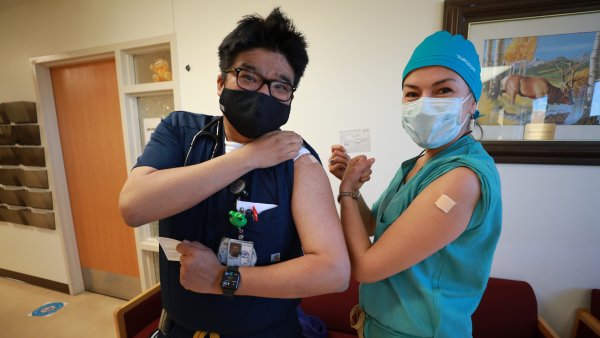 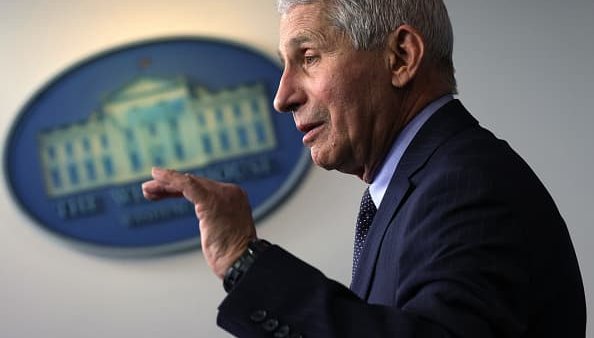