The U.S. set another record of new daily COVID-19 cases on Thursday with more than 225,000 a day after reporting more than 3,000 COVID-related deaths, the highest one-day total of deaths yet.

The crisis across the country is pushing medical centers to the breaking point and leaving staff members and public health officials burned out and plagued by tears and nightmares.

It comes as the Food and Drug Administration’s vaccine advisory panel endorsed the approval of Pfizer's COVID-19 vaccine candidate.

An independent panel of experts has overwhelmingly voted in favor of recommending that the Food and Drug Administration authorize Pfizer's Covid-19 vaccine for emergency use in people ages 16 and older.

The vote Thursday afternoon was split 17 in favor of the authorization, four against, with one person abstaining from the vote.

The committee members were not given an opportunity during the meeting to explain their votes against recommending authorization. However, there was much discussion among the group before the final vote authorizing the shots for teenagers 16 and 17 years old. Some experts worried there was not enough data to make an informed decision about the vaccine in adolescents.

One of the members who voted no, Dr. David Kim, director of the division of vaccines in the Office of Infectious Disease and HIV/AIDS Policy in the Department of Health and Human Services, told CNBC in an email that he would have voted yes "most enthusiastically" had the vote been limited to recommending authorization to those ages 18 and older.

Though the FDA is not obligated to go along with the panel's recommendation, it is widely anticipated that the regulatory agency will indeed authorize the Pfizer vaccine for emergency use, and do so promptly.

The chairman of the House select subcommittee on the coronavirus pandemic is demanding more information from top officials in the administration after a career employee at the Centers for Disease Control and Prevention testified she was ordered to destroy an email regarding a political appointee's efforts to "alter or rescind" information considered damaging to President Donald Trump, NBC News reports.

In a letter to Health and Human Services Secretary Alex Azar and CDC Director Dr. Robert Redfield, Rep. James Clyburn, D-S.C., revealed that on Monday, Charlotte Kent, chief of the Scientific Publications Branch and editor-in-chief of the Morbidity and Mortality Weekly Report, stated in closed-door testimony that she had been instructed to destroy an email from Paul Alexander, who was then the scientific adviser to HHS spokesman Michael Caputo, demanding the CDC insert new language in a previously published scientific report on coronavirus risks to children.

Kent testified that the morning after the email was sent she received a call from another career official instructing her to delete the message at the request of Redfield. When Kent tried to find the email, she said it had already disappeared, according to committee aides who briefed reporters.

Kent also testified the CDC delayed publication of an article regarding a coronavirus outbreak at a Georgia summer camp to ensure it would not become public until after Redfield’s July 31 testimony before the committee, Clyburn said in his letter.

Moderna has announced that it has started to study the impact of its coronavirus vaccine on 3,000 adolescents.

Moderna announced Thursday it had begun testing its coronavirus vaccine candidate on adolescents between the ages of 12 and 17, NBC Boston reports.

The company said earlier this month it planned to enroll 3,000 children, with half receiving two shots of the vaccine four weeks apart, and half getting placebo shots.

Most vaccine trials are generally tested on adults first to ensure safety before pediatric trials begin. As of late October, only Pfizer has included kids as young as 12 in its clinical trials.

“We hope we will be able to provide a safe vaccine to provide protection to adolescents so they can return to school in a normal setting,” said CEO Stéphane Bancel.

Moderna is awaiting emergency clearance from the FDA after early trial results showed its COVID vaccine is more than 94% effective. Moderna is the second drugmaker to seek emergency use after Pfizer applied for the same authorization on Nov. 20.

Coronavirus May Have Been Spreading in Italy in Fall 2019, Study Shows

A study out of Italy is seen as added evidence that COVID-19 virus may have been spreading in late fall of 2019, before an outbreak was first reported in Wuhan, China.

Researchers identified the new coronavirus infection in a specimen taken in early December from a 4-year-old boy who lived near Milan. The boy first developed a cough and other symptoms in November, months before COVID cases were identified in Italy.

In the study, the researchers went back and looked at back-of-the-throat swab specimens that had been collected from 39 patients between September and February. One from the boy tested positive for the new coronavirus.

The researchers noted that the Italian child developed cold and flu-like symptoms in November and then a measles-like rash in early December. But they don’t detail where the child had been or who had been around.

Scientists at the University of Milan led the study and the medical journal Emerging Infectious Diseases this week posted it online. The U.S. Centers for Disease Control and Prevention publishes the journal, but it is editorially independent of the agency.

US Jobless Claims Jump to 853,000 Amid Resurgence of Virus

The number of people applying for unemployment aid jumped last week to 853,000, the most since September, evidence that companies are cutting more jobs as new virus cases spiral higher.

The Labor Department said Thursday that the number of applications increased from 716,000 the previous week. Before the coronavirus paralyzed the economy in March, weekly jobless claims typically numbered only about 225,000.

The latest figures coincide with a surging viral outbreak that appears to be weakening the job market and the economy and threatening to derail any recovery. Consumers thus far haven't spent as much this holiday shopping season as they have in previous years, according to credit and debit card data. And in November, employers added jobs at the slowest pace since April. Restaurants, bars and retailers all cut jobs last month.

In a grim milestone, the United States reported a record number of new coronavirus cases Wednesday.

According to NBC News' tally, 222,994 people tested positive for COVID-19 on Wednesday. The previous daily case record was set last Thursday when the U.S. recorded 219,394 cases.

The U.S. has recorded more than 15.4 million coronavirus cases and 290,000 deaths since the start of the pandemic, according to NBC News. 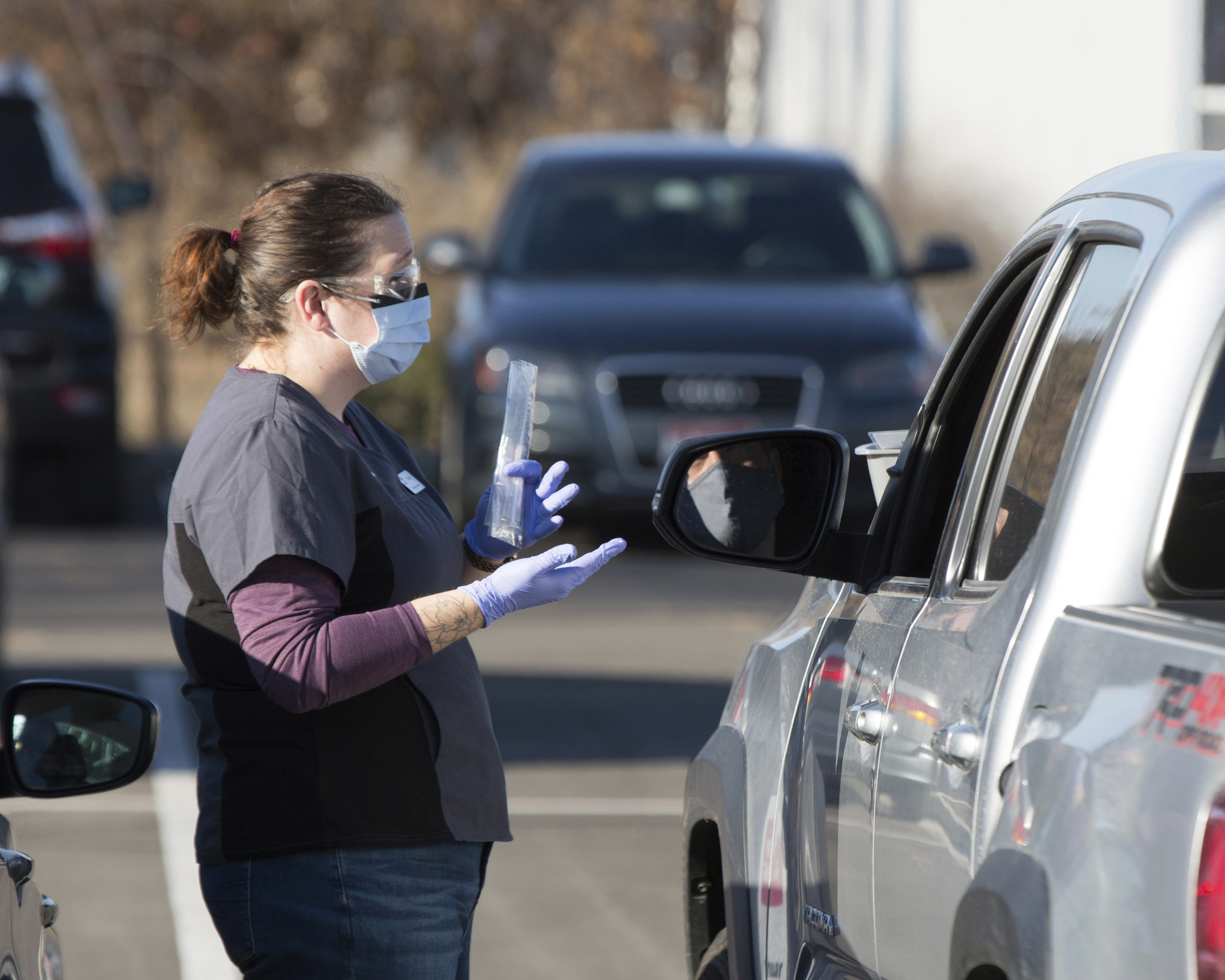 Tensions Rise Over Masks as Virus Grips Smaller US Cities