The United States reached a grim milestone Monday, surpassing 300,000 total coronavirus-related deaths since the beginning of the pandemic, according to a tally by NBC News.

On the same day, hospital workers across the country began unloading precious frozen vials of the Pfizer COVID-19 vaccine as the largest vaccination campaign in U.S. history got underway, with the first shots administered to health care workers in New York.

Early supplies are sparse, and health care workers are first in line, not just doctors and nurses but also janitors and other staff. So are nursing home residents. How well initial vaccinations go will help reassure a wary public when it's their turn sometime next year. Another vaccine candidate, one from Moderna, could be approved by the Food and Drug Administration as soon as the end of the week.

The vaccine campaign is offering hope in the fight against the pandemic that has infected over 16 million in the U.S. alone.

Acting Defense Secretary Christopher Miller was among the first Cabinet members to get the vaccine. He traveled to Walter Reed National Military Medical Center in Bethesda, Md., on Monday and was given the first dose of Pfizer-BioNTech’s coronavirus vaccine.

While Miller was there, a number of the medical center’s front-line healthcare staff were also receiving the first of the two-shot regimen. It was the first day of the vaccine’s nationwide rollout.

Other high-ranking Pentagon military service leaders are expected to get the vaccine as soon as next week, in an effort to encourage the military force to also get shots, and to show that it is safe. Currently, getting the vaccine is voluntary within the military.

In a message to his force on Tuesday, Adm. Mike Gilday, chief of naval operations, urged service members to “strongly consider” getting the vaccine, not just for themselves but to help protect their shipmates. Saying he will receive the vaccine “shortly,” Gilday called the vaccine a “proven effective measure” to better protect the troops.

The FDA announced on Tuesday that it has authorized the first coronavirus test that can be taken at home and without a prescription.

The first home test for COVID-19 that doesn't require a prescription will soon be on U.S. store shelves.

U.S. officials Tuesday authorized the rapid coronavirus test which can be done entirely at home. The announcement by the Food and Drug Administration represents another important — though incremental — step in U.S. efforts to expand testing options.

The agency's action allows the test to be sold in places like drugstores "where a patient can buy it, swab their nose, run the test and find out their results in as little as 20 minutes,” said FDA Commissioner Stephen Hahn, in a statement.

Regulators granted emergency use for a similar test last month, but that one requires a doctor’s prescription.

Initial supplies of the over-the-counter test will be limited. Australian manufacturer Ellume said it expects to produce 3 million tests next month before ramping up production over the first half of 2021.

A company spokesperson said the test will be priced around $30 and be available at pharmacies and online. The test connects to a digital app to help users interpret the results.

WHO to Sift Chinese Samples, Data in Hunt for Virus Origins

A scientist taking part in the World Health Organization’s mission track down the origins of the coronavirus says they plan to sift through samples and medical data from China to help determine where the bug came from.

The search for the source of the new coronavirus has sparked claims of cover-ups and fueled political tensions particularly between the Trump administration and Beijing.

Most researchers think that the virus originated in animals in China, probably in bats, and WHO has put together a 10-strong team of experts to examine the science.

Fabian Leendertz, a biologist at Germany’s Robert Koch Institute who specialized in emerging diseases, stressed that the goal is to gather data to reduce future risks, “not looking for a guilty country or something like that.”

NBC has an exclusive look inside the Wuhan lab working to track the origins of the new coronavirus.

A 96-year-old World War II veteran in Massachusetts became the first Veterans Affairs patient in the country to receive a COVID-19 vaccine.

Margaret Klessens, a resident of the Community Living Center in the Edith Nourse Rogers Memorial Veterans Hospital, received the shot just after noon on Monday at the VA Medical Center in Bedford, the agency announced in a news release.

“The nurse came up and told me that the vaccine was in and I was going to get a dose of it. So I got up, I was very happy,” Klessens said.

NBC Boston reports Klessens served in the Women's Army Auxiliary Corps. and worked in communications at Fort Oglethorpe in Georgia through the war.

“Ultimately, the department’s goal is to offer the vaccine to all Veterans receiving care at VA,” said VA Secretary Robert Wilkie. “As increased vaccine supply is obtained, VA plans to distribute these vaccines at additional facilities to provide the vaccine to more Veterans and employees.”

The Food and Drug Administration said in documents posted online that its initial review confirmed the effectiveness and safety of the vaccine developed by Moderna and the National Institutes of Health, bringing the shot to the cusp of U.S. authorization.

Moderna submitted its COVID-19 vaccine data to the FDA on Nov. 30. It said a final analysis of its phase three clinical trial, with 30,000 participants, found the vaccine was more than 94% effective in preventing the coronavirus, was safe and appeared to fend off severe disease. Like Pfizer's shot, Moderna's vaccine uses messenger RNA, or mRNA, technology.

A panel of advisers will offer their recommendation Thursday, with a final FDA decision expected soon thereafter.

Speaking to ABC's “Good Morning America” on Tuesday, Fauci said, “For security reasons, I really feel strongly that we should get them vaccinated as soon as we possibly can." He adds he'd like to see Biden "fully protected as he enters into the presidency in January.”

Fauci says that while President Donald Trump probably still has antibodies to the virus that will protect him for at least several months, he should get the vaccine as well to be “doubly sure.” Trump was hospitalized with COVID-19 in early October.

Fauci says Vice President Mike Pence should get vaccinated, too. He says, “You still want to protect people who are very important to our country right now.”

US Ramps Up Vaccination Efforts

Packed in dry ice to stay at ultra-frozen temperatures, shipments of Pfizer’s COVID-19 vaccine are set to arrive at 400 additional hospitals and other distribution sites, one day after the nation’s death toll surpassed a staggering 300,000. The first 3 million shots are being strictly rationed to front-line health workers and elder-care patients, with hundreds of millions more shots needed over the coming months to protect most Americans.

In Florida, government officials expect to have 100,000 doses of the vaccine by Tuesday at five hospitals across the state.

Vaccinations were also expected to kick off Tuesday in New Jersey, which is dividing some 76,000 doses among health workers and nursing home residents, NBC New York reports. The federal government is coordinating the massive delivery operation by private shipping and distribution companies based on locations chosen by state governors.

Following another initial set of deliveries Wednesday, officials with the Trump administration's Operation Warp Speed in Washington said they will begin moving 580 more shipments through the weekend.

The United States began its rollout of the coronavirus vaccine on Monday. Hear from health leaders across the country as frontline workers began receiving their vaccinations.

NFL Won't Be Cutting in Line for Coronavirus Vaccine

The NFL won’t be cutting in line to get the coronavirus vaccine.

“No one should be thinking about the vaccine going anywhere other than our first responders and the most vulnerable people right now,” said DeMaurice Smith, executive director of the NFL Players Association.

“We’re in complete harmony with the union in that we feel that it’s vital that frontline healthcare workers and another essential service workers are at the front of the line,” said Dr. Allen Sills, the NFL’s chief medical officer.

“The rollout of the vaccine is going to be driven by public health concerns and what medical and government officials determine to be the most efficacious for risk reduction across society as a whole. We’re prepared to support that effort,” Sills said.

On a recent media conference call, Smith and NFLPA president JC Tretter emphasized that football doesn’t deserve any favors or special treatment when it comes to COVID-19 inoculations.

The NFL will continue spending millions of dollars on daily COVID-19 tests, combined with social distancing and contact tracing to mitigate infections so they can get all 256 regular season games and 13 playoff contests in the books culminating in Super Bowl 55 on Feb. 7 in Tampa, Florida.

Regulators have loosened rules to make it easier for out-of-state doctors to work in Alabama as the coronavirus pandemic both fills hospital beds and strains medical staff by sickening doctors and nurses, officials said Monday as the first doses of vaccine arrived.

With an average of more than 2,100 people hospitalized daily over the last week with the illness caused by the virus, COVID-19, the Alabama Board of Medical Examiners and the Medical Licensure Commission decided to let qualified physicians from other states and Canada seek temporary emergency licenses to work in the state.

The Alabama Hospital Association has reported staffing shortages caused by both an inadequate number of beds in places and a lack of staff to treat patients, partly because medical workers are among the ill.

Under an emergency rule adopted by regulators during a weekend meeting, doctors licensed in other states or Canada can seek a license to work in an Alabama hospital for 180 days or until Gov. Kay Ivey ends the state’s public health emergency. 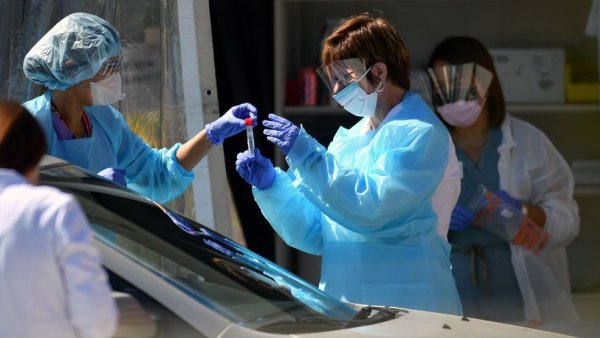 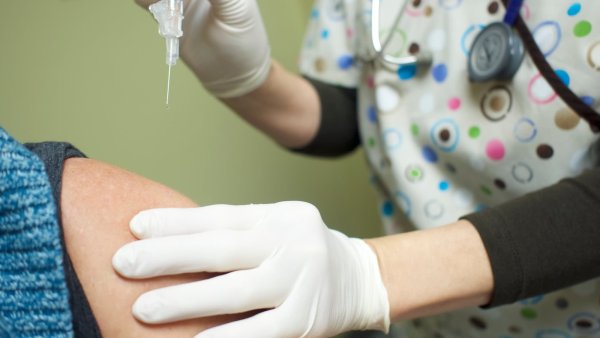 When Dr. Fauci and Other Experts Say You Can Expect to Get Vaccinated for Covid-19