Here are the latest COVID headlines from around the state

Chicago's United Center will be turned into a mass COVID-19 vaccination site opening next month, a coalition of city, state and federal officials announced Friday.

Meanwhile, Illinois' Phase 1B of COVID-19 vaccinations has expanded as the state opened up eligibility to a much larger group of residents. When might the next phase begin?

Here are the latest COVID headlines from around the state:

The United Center won't be the only mass vaccination site opening in the near future.

The city announced Thursday that it has reached a contract deal with a health lab that will operate "new mass vaccination sites in the coming months."

Prism Health Lab, a minority-owned company, has received a $15 million contract to operate the upcoming vaccination clinic as well as city-run vaccination sites known as PODs.

Chicago Department of Public Health Commissioner Dr. Allison Arwady said earlier this month that the department also looked into hosting mass-vaccination sites at Wrigley Field and Soldier Field, but planned to wait until the city’s allotment of vaccines increases.

Gov. J.B. Pritzker hinted at the possibility for additional locations in Illinois as well.

Though the rides are free to all Chicagoans across the city, Uber said the company is looking to target residents on the South and West Sides "to help close equity gaps on vaccination access."

"By working with partners like FEMA, Zocdoc, United Center and Uber, we will be able to take significant steps forward in our mission to vaccinate all of our residents," Chicago Mayor Lori Lightfoot said in a statement. "Though we are not yet out of the dark tunnel we've been in since COVID-19 first came to our city, programs like these have made the light at the end of it that much brighter."

Health officials in Illinois are reporting 2,44 new cases of coronavirus on Friday along with 55 additional deaths attributed to the virus.

According to the latest data from the Illinois Department of Public Health, Friday's new cases bring the state to 1,183,667 cases of the virus since the pandemic began last year. A total of 20,460 deaths have been reported as a result of the virus.

The seven-day positivity rate remained the same Friday, with 2.5% of all tests coming back with positive results, according to IDPH. The positivity rate on individuals tested also remained at 2.7%.

Over the last 24 hours, state laboratories received 92,256 test specimens, with 17,988,085 tests performed during the pandemic in all.

Hospitalizations in the state continue to drop, with 1,393 patients currently hospitalized due to COVID-19. Of those patients, 336 are currently in intensive care units, while 174 are on ventilators.

According to IDPH data, a total of 102,670 doses of the vaccine were administered in Illinois on Thursday, with the seven-day rolling average now standing at 68,988 doses per day.

Illinois officials say all residents who are currently eligible to be vaccinated under the current Phase 1B Plus of the state's vaccine rollout plan will be able to get vaccinated there.

The site will be appointment only, Gov. J.B. Pritzker's office said in a statement Friday, and seniors will have first access to appointments before the site opens.

Once the site opens on March 10, registration will be open for all Illinois residents eligible under the state's Phase 1B guidelines.

Chicago's United Center will be turned into a mass COVID-19 vaccination site opening next month, a coalition of city, state and federal officials announced Friday.

The United Center will open as a vaccination site on March 10 through a partnership of Chicago and Illinois authorities with the Federal Emergency Management Agency. Crews were setting up in the parking lot of the arena on Friday morning.

The United Center site will be able to administer 6,000 shots per day at full capacity, officials said, but noting that demand was "anticipated to be high." Those doses will be provided directly from the federal government and not diverted from the supply sent to Chicago or Illinois.

Officials said the United Center vaccination site will operate seven days a week for eight weeks by appointment only, and that information about where and how to make appointments would be made available in coming days. 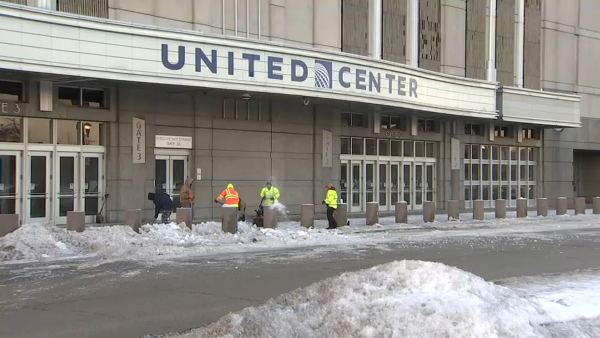 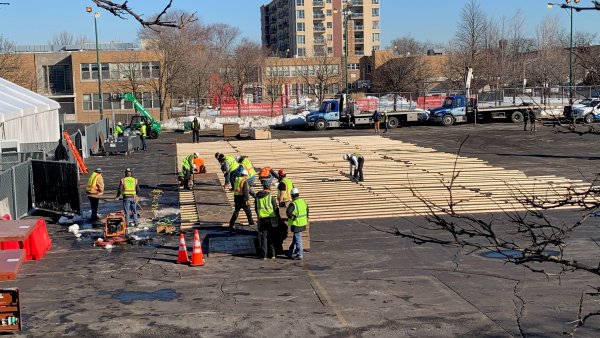 Gov. J.B. Pritzker, Chicago Mayor Lori Lightfoot, Sens. Dick Durbin and Tammy Duckworth, as well as Cook County Board President Toni Preckwinkle and the Federal Emergency Management Agency's Region 5 Administrator Kevin Sligh will all take part in the news conference at 11:30 a.m. at the Thompson Center in downtown Chicago, according to Pritzker and Lightfoot's public schedules.

The details of what they may discuss were not immediately clear. The event can be watched live in the video player above beginning at around 11:30 a.m. CT.

Dozens Denied COVID Vaccines After Trying to Use Reservations Made for Others: Officials

Approximately 100 people were turned away from a suburban vaccination facility on Saturday when they tried to use reservations that had been made for other people, an unexpected problem that has McHenry County public health officials considering their options on how to avoid a repeat of the incident.

According to McHenry County Public Health Nursing Director Susan Karras, the attempt by individuals to use the appointments was “disheartening” in a time when vaccine doses are limited due to shipping issues caused by recent bad weather.

Karras says that the vaccine rollout has been going well in McHenry County, but it hit a glitch over the weekend when people began sharing the links they received by email to set up appointments.

“We are having to turn them away because we are trying to focus on priority groups,” she said. “We don’t want people jumping in the line outside of those groups.”

Karras says the reservation emails explicitly tell residents not to share the links with others, and the county is considering penalties for those who do.

A Chicago event space has been cited for violating coronavirus restrictions after more than 50 people gathered for an event this weekend, one of several businesses to receive citations for COVID restriction-related infractions.

The Affair Room, 1929 W. 87th St., held a gathering with 57 people in attendance not wearing masks or social distancing. It was also issued a Cease and Desist Order for operating without a business license.

Luxurious Events LLC, 2452 W. Division St., held a gathering with 25 patrons after the required midnight closure time, without social distancing or face coverings. Establishment was also issued a Cease and Desist Order for operating without a business license.

Finally, an unnamed location at 5643 W North Ave was also cited for holding a gathering with 24 patrons without social distancing or face coverings. It was also issued a Cease and Desist Order for operating without a business license.

Since March 2020, the Chicago Department of Business Affairs and Consumer Protection has conducted 8,635 investigations and cited 441 businesses for violating COVID-19 regulations.

Should You Wait to Receive a COVID Vaccine With New Variants Arising?

Should you wait to receive the coronavirus vaccine if new variants continue to arise? Chicago's top doctor weighs in.

"I'm not sure we're ever going to have to change the vaccine," Arwady said. "if we do, we're talking like way down the line in the context of variants."

As the U.S. continues to monitor new variants of COVID-19 emerging nationwide, Arwady noted that, in the future, manufactures could adapt or booster the vaccine with more information.

"That's the one that is thought to be more infectious meaning more contagious, but the vaccine continues to be very protective against it as we saw in in this trial here," Arwady said during a Facebook Live this week.