The new strain was identified in southeastern England in September and has been spreading in the area ever since, a WHO official told the BBC on Sunday

A growing list of European Union nations and Canada barred travel from the U.K. on Sunday and others were considering similar action, in a bid to block a new strain of coronavirus sweeping across southern England from spreading to the continent.

France, Germany, Italy, the Netherlands, Belgium, Austria, Ireland and Bulgaria all announced restrictions on U.K. travel, hours after British Prime Minister Boris Johnson announced that Christmas shopping and gatherings in southern England must be canceled because of rapidly spreading infections blamed on the new coronavirus variant.

France banned all travel from the U.K. for 48 hours from midnight Sunday, including trucks carrying freight through the tunnel under the English Channel or from the port of Dover on England's south coast. French officials said the pause would buy time to find a “common doctrine” on how to deal with the threat, but it threw the busy cross-channel route used by thousands of trucks a day into chaos.

The Port of Dover tweeted Sunday night that its ferry terminal was “closed to all accompanied traffic leaving the UK until further notice due to border restrictions in France.”

Eurostar passenger trains from London to Paris, Brussels and Amsterdam were also halted.

Germany said all flights coming from Britain, except cargo flights, were no longer allowed to land starting midnight Sunday. It didn’t immediately say how long the flight ban would last. Belgian Prime Minister Alexander De Croo said he was issuing a flight ban for 24 hours starting at midnight “out of precaution.” “There are a great many questions about this new mutation,” he said, adding he hoped to have more clarity by Tuesday.

Canada announced its own ban Sunday night. Prime Minister Justin Trudeau said in a statement that for 72 hours starting at midnight Sunday, “all flights from the UK will be prohibited from entering Canada.” He added that travelers who arrived Sunday would be subject to secondary screening and other health measures.

The British government said Johnson would preside at a meeting of the government's crisis committee, COBRA, on Monday in the wake of the other nations' measures. They come at a time of huge economic uncertainty for the U.K., less than two weeks before it leaves the EU's economic structures Dec. 31, and with talks on a new post-Brexit trade relationship still deadlocked.

Johnson said Saturday that a fast-moving new variant of the virus that is 70% more transmissible than existing strains appeared to be driving the rapid spread of new infections in London and southern England in recent weeks. But he stressed “there’s no evidence to suggest it is more lethal or causes more severe illness,” or that vaccines will be less effective against it.

On Sunday, British Health Secretary Matt Hancock added to the alarm when he said “the new variant is out of control.” The U.K. recorded 35,928 further confirmed cases, around double the number from a week ago.

The U.K. has become the first country to approve the Pfizer and BioNTech COVID-19 vaccine and will begin distributing doses to the public next week. Former FDA Associate Commissioner Peter Pitts says the U.S. will be right behind the U.K., predicting hundreds of millions of doses will be ready to go before Christmas.

Germany, which holds the rotating EU presidency, called a special crisis meeting on Monday to coordinate the response to the virus news among the bloc's 27 member states.

Beyond Europe, Israel also said it was banning flights from Britain, Denmark and South Africa because those were the countries where the mutation is found.

The World Health Organization tweeted late Saturday that it was "in close contact with U.K. officials on the new #COVID19 virus variant" and promised to update governments and the public as more is learned.

The new strain was identified in southeastern England in September and has been spreading in the area ever since, a WHO official told the BBC on Sunday.

The prime minister had been moved to intensive care on Monday due to "persistent" COVID-19 symptoms.

“What we understand is that it does have increased transmissibility, in terms of its ability to spread,” said Maria Van Kerkhove, WHO’s technical lead on COVID-19.

Studies are under way to better understand how fast it spreads and whether “it’s related to the variant itself, or a combination of factors with behavior,” she added.

She said the strain had also been identified in Denmark, the Netherlands and Australia, where there was one case that didn't spread further.

“The longer this virus spreads, the more opportunities it has to change,” she said. “So we really need to do everything we can right now to prevent spread."

Viruses mutate regularly, and scientists have found thousands of different mutations among samples of the virus causing COVID-19. Many of these changes have no effect on how easily the virus spreads or how severe symptoms are.

British health authorities said that while the variant has been circulating since September, it wasn’t until the last week that officials felt they had enough evidence to declare that it has higher transmissibility than other circulating coronaviruses.

British Prime Minister Boris Johnson announced on social media that he is under quarantine after contracting coronavirus. Johnson says his symptoms are mild and he will continue to work from home.

Patrick Vallance, the British government’s chief scientific adviser, said officials are concerned about the new variant because it contained 23 different changes, “an unusually large number of variants” affecting how the virus binds to and enters cells in the body.

Officials aren't certain whether it originated in the U.K., Vallance added. But by December, he said it was causing over 60% of infections in London.

U.S. President-elect Joe Biden’s nominee for U.S. surgeon general said Sunday that the emergence of the new strain doesn’t change the public health guidance on precautions for reducing the spread of the virus, such as wearing masks, social distancing and washing hands.

“While it seems to be more easily transmissible, we do not have evidence yet that this is a more deadly virus to an individual who acquires it,” Vivek Murthy said on NBC’s “Meet the Press.” “There’s no reason to believe that the vaccines that have been developed will not be effective against this virus, as well.”

Europe has been walloped this fall by soaring new infections and deaths due to a resurgence of the virus, and many nations have reimposed a series of restrictions to reign in their outbreaks.

Britain has seen over 67,000 deaths in the pandemic, the second-highest confirmed toll in Europe after Italy. Europe as a whole has recorded nearly 499,000 virus deaths, according to a tally by Johns Hopkins University that experts believe is an undercount, due to limited testing and missed cases. 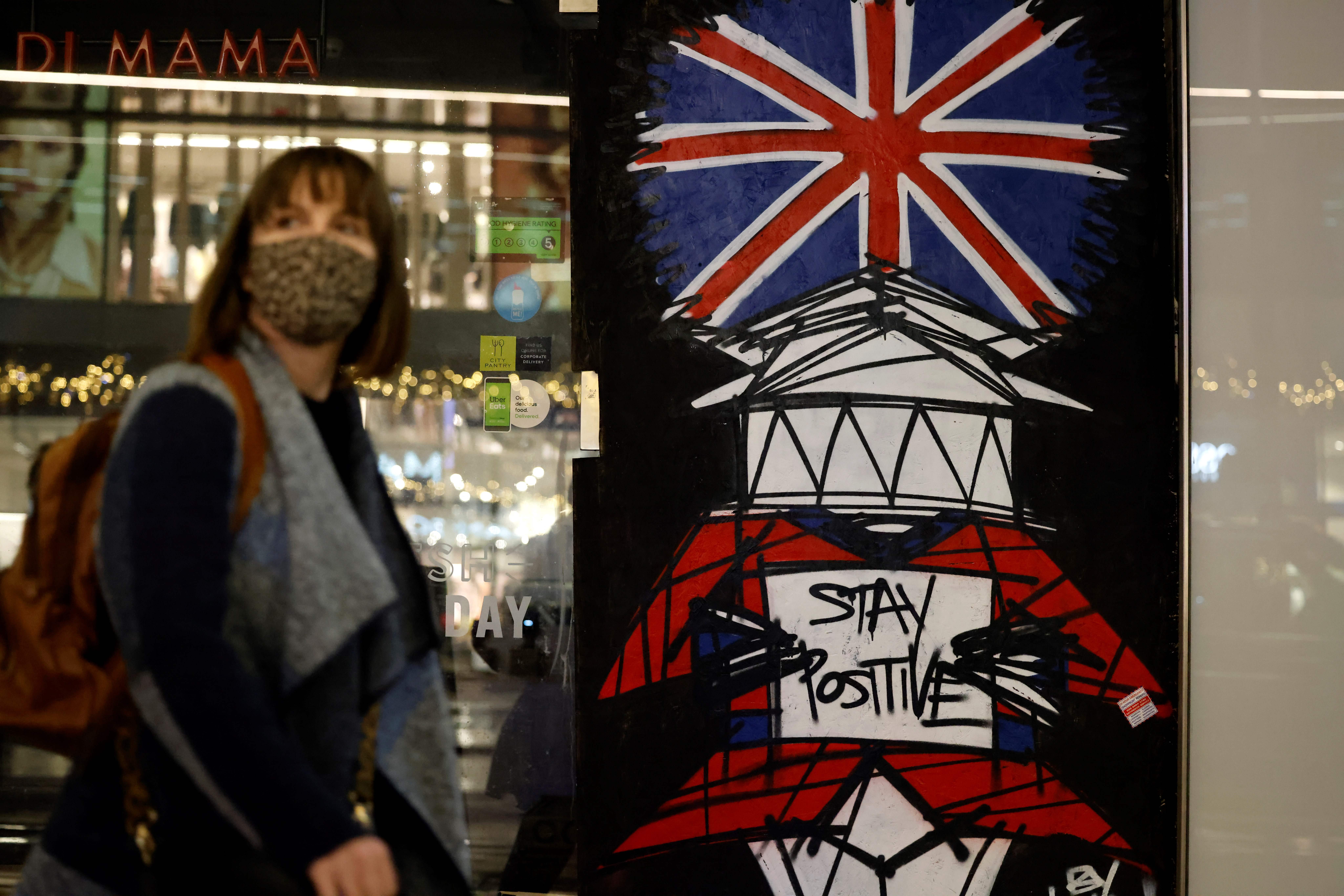 Explainer: Are New Coronavirus Strains Cause for Concern?

The European Medicines Agency, meanwhile, is meeting Monday to approve the first COVID-19 vaccine for the European Union's 27 nations, bringing vaccinations closer for millions of EU citizens. The vaccine made by German pharmaceutical company BioNTech and American drugmaker Pfizer is already in use in the United States, Britain, Canada and other countries.

The EMA moved up its assessment of the Pfizer-BioNTech vaccine by a week after heavy pressure from EU governments, especially Germany, which has said that after the EMA approval it could start vaccinating citizens as early as next Sunday.

In an urgent address to the nation on Saturday, Johnson ordered all non-essential shops, hairdressers and gyms in London and large parts of southern England closed and told Britons to reorganize their holiday plans. No mixing of households is allowed indoors in the region, and only essential travel is permitted. In the rest of England, people will be allowed to meet in Christmas bubbles for just one day instead of the five that were planned.

While Hancock insisted officials had acted “very quickly and decisively,” critics said Britain's Conservative government should have moved against rising infections much earlier.

“The alarms bells have been ringing for weeks, but the prime minister chose to ignore them,” said Keir Starmer, leader of the opposition Labour Party. “It is an act of gross negligence by a prime minister who, once again, has been caught behind the curve.”