COVID Booster Shots and the Omicron Variant: What We Know So Far

Booster shot eligibility is expanding as the omicron COVID variant spreads in the U.S.

But with some breakthrough cases already being reported, which booster shot is best for you and what do we know about their effectiveness against the new variant?

According to medical experts, the three vaccines currently available in the U.S. each offer protection against COVID, though many questions remain unanswered with the variant.

Here's a breakdown of what we know so far about the booster shots:

How well do booster shots protect against omicron?

Scientists don't yet know how big a threat the omicron variant really is or if it will affect protection given from current vaccines. Currently the extra-contagious delta variant is responsible for most of the COVID-19 cases in the U.S. and other countries.

In Chicago and multiple Midwestern states, early cases of the omicron variant have appeared in fully vaccinated residents, some of whom also received booster doses, though symptoms have so far remained mild, a point Chicago's top doctor highlighted Thursday.

"So this is exactly why we are doubling down on sort of, you know, working to make sure that people can be vaccinated and boosted," Chicago Department of Public Health Commissioner Dr. Allison Arwady said Thursday during a Facebook Live. "The vaccine, you know, has never been 100% protective. We should have some more specific numbers for you within probably a week or two related to what are the different protection levels. Clearly the vaccine continues to show protection against omicron. It is probably not as high as the protection against the other variants, and for me, the biggest question actually is how much that booster is fitting in. We are seeing some breakthroughs, including in people who have been boosted. We are not seeing severe outcomes in those folks at this point, which is critical."

The omicron variant, discovered late last month, carries an unusually large number of mutations and scientists are racing to learn how easily it spreads, whether it causes illness that is more serious or milder than other coronavirus types — and how much it might evade the protection of prior vaccinations.

Pfizer said Wednesday that a booster dose of its COVID-19 vaccine may offer important protection against the new omicron variant even though the initial two doses appear significantly less effective.

Similar data from Moderna and Johnson & Johnson is expected to be released in the coming days.

In both Illinois and Chicago, where omicron has now been detected, officials continue pushing for residents to get vaccinated against COVID-19 and get their booster shots as soon as they are eligible, meaning six months after Moderna or Pfizer's vaccine or two months after the Johnson & Johnson vaccine.

“What we need to do is add more layers of protection,” Dr. Julie Vaishampayan of the Infectious Diseases Society of America told the Associated Press.

That's especially important with holiday travel and gatherings around the corner.

A booster shot is one of those layers. The added dose triggers a big jump in virus-fighting antibodies. Even if the antibodies don't prove quite as effective against omicron as they are against other variants, simply having more of them might compensate -- in addition to bolstering protection against delta.

Will there be an omicron booster needed?

It's still unclear whether or not a booster that specifically targets omicron will be necessary, but vaccine makers are already preparing.

"I don't have the answers out of whether an omicron booster will be needed, but what I do know is that getting the vaccines we have now and getting boosted has helped protect against the spread of omicron in a number of case examples," Arwady said.

Both Pfizer and Moderna have said they are working on omicron-specific vaccines that could be used as booster doses against the new variant.

"If we have to make a brand new vaccine I think that's going to be early 2022 before that's really going to be available in large quantities," Burton said.

Who is currently eligible for a booster?

Health officials are now strongly encouraging booster shots of all three COVID vaccines for any U.S. adult. Sixteen- and 17-year-olds are also now eligible for a booster dose of the Pfizer vaccine following a ruling Thursday.

The U.S. and many other nations already were urging adults to get booster shots to pump up immunity that can wane months after vaccination, calls that intensified with the discovery of the worrisome new omicron variant.

On Thursday, the Food and Drug Administration gave emergency authorization for 16- and 17-year-olds to get a third dose of the vaccine made by Pfizer and its partner BioNTech -- if it’s been six months since their last shot. The CDC soon followed by also expanding its Pfizer/BioNTech booster recommendation for the same ages.

“Vaccination and getting a booster when eligible, along with other preventive measures like masking and avoiding large crowds and poorly ventilated spaces, remain our most effective methods for fighting COVID-19,” Dr. Janet Woodcock, acting FDA commissioner, said in a statement.

The Pfizer vaccine is the only option in the U.S. for anyone younger than 18, either for initial vaccination or for use as a booster. It’s not yet clear if or when teens younger than 16 might need a third Pfizer dose.

What about side effects with booster shots?

The CDC stated that side effects with the third shot "were similar to that of the two-dose series."

Which booster shot should you get based on your first dose?

For those who received the Johnson & Johnson vaccine, Arwady said "we definitely are seeing people choosing to get the Pfizer or Moderna as their follow up dose," a move she "fully supports."

"If you got Johnson and Johnson, I have been advising folks if they got J&J, depending on the reason they chose J&J the first time, if they're going to get that booster I've been recommending getting likely one of the mRNA series - the Moderna or the Pfizer," she's said. "That's where we saw the biggest increase in antibodies in the studies."

Arwady noted that those who receive an additional Johnson & Johnson vaccine two months after getting the initial dose should get a third dose -- this time, choosing the from the other two available.

"I encourage anybody who got J&J two months after getting that one J&J dose, you should get another dose of vaccine," Arwady said. "If it doesn't matter to you which kind you get, I would recommend getting either Pfizer or Moderna."

She has noted, however, that "getting that second dose of J&J also majorly increases the protection."

Doses of the two vaccine makers' booster shots are different, Arwady noted. Moderna's booster dose will be half of its original dosing, while Pfizer's booster shot is the same as the initial doses.

"The reason why Moderna is a half dose is because Moderna had a higher dose of the mRNA the only active part of the vaccine to start with," Arwady said. "So it's part of why the side effects are sometimes a little higher and the folks who have Moderna." 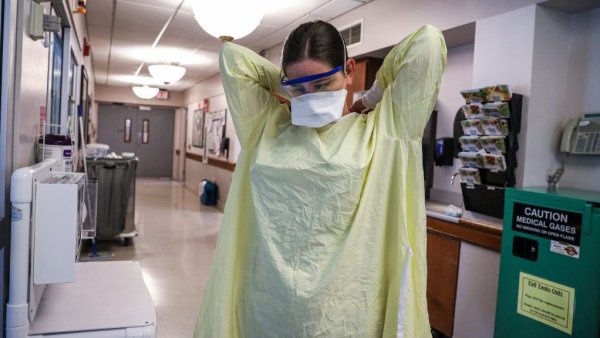