1. Dow on track for best month in over 33 years

The Dow Jones Industrial Average, while set to open about 100 points lower Monday, remained on track for its best month since January 1987. With one day left in November, the Dow was up nearly 13% for the month. The fourth straight Monday of encouraging Covid-19 vaccine data gave U.S. stock futures a small boost. Moderna said new data confirmed its vaccine was more than 94% effective and safe.

Bitcoin bounced Monday to more than $18,600 after a weekend rebound. The world's biggest cryptocurrency hit a record high last Wednesday above $19,000 before plunging about 13% the next day and basically trading sideways Friday. Bitcoin, at its 2020 all-time high, logged a year-to-date gain of about 150%, emerging as a top gainer during the pandemic.

Shares of IHS Markit gained 7% in the premarket after the analytics firm agreed to be purchased by data giant S&P Global in a deal worth $44 billion, including debt, the biggest merger of 2020 in a year marked by the Covid-19 crisis. In fact, deal-making touched a record high in the September quarter, with more than $1 trillion worth of transactions. 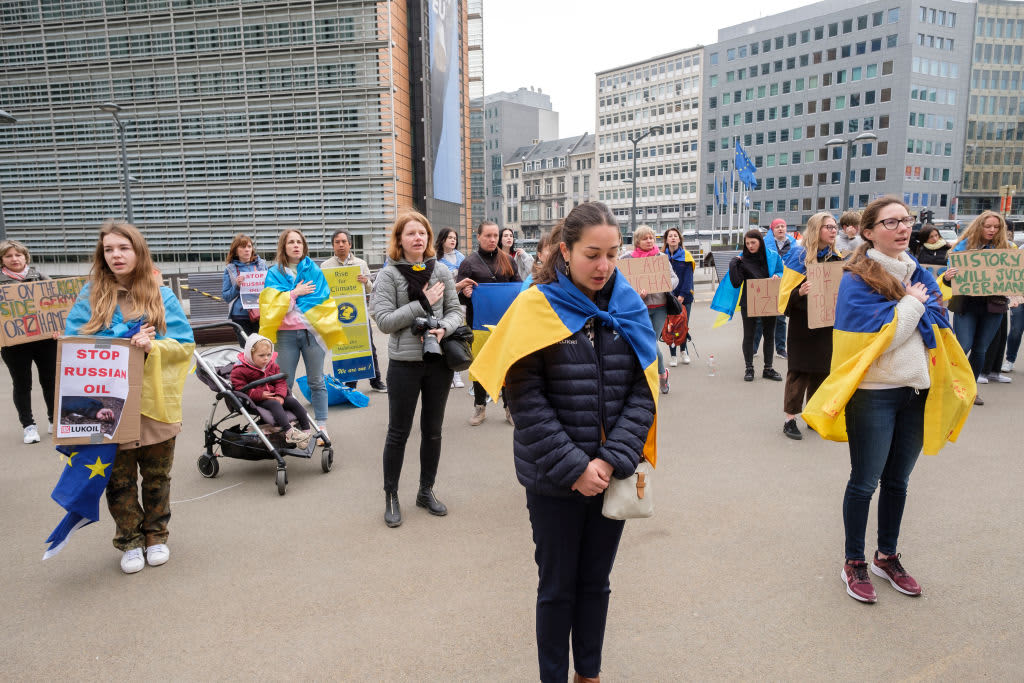 ‘Who Is Talking About Climate Change Now?' What the Ukraine War Means for Global Heating

General Motors and Nikola on Monday announced a reworked, smaller agreement that keeps the fuel cell partnership intact but eliminates an equity stake in the start-up from the auto giant. The adjusted deal also nixes plans for building Nikola's electric pickup truck. Shares of Nikola sank more than 22% in the premarket.

Moderna plans to request emergency use authorization from the FDA for its coronavirus vaccine Monday. Shares of Moderna, the second drugmaker after Pfizer to seek emergency clearance from U.S. regulators, soared 12% in Monday's premarket, a gain that would add to the stock's already 550% surge in 2020. The announcement of more than 94% efficacy provides hope that some Americans could get the first doses of Moderna's two-dose vaccine within a few weeks. On Nov. 16, Moderna reported that an early analysis of its phase three trial showed at least 94% effectiveness. The shots from Moderna and Pfizer employ a new approach to vaccines that uses genetic material to provoke an immune response.

The Trump administration is poised to add China's top chipmaker SMIC and national offshore oil and gas producer Cnooc to a blacklist of alleged Chinese military companies, according to a Reuters report, citing a document and sources. A recent executive order issued by President Donald Trump would prevent U.S. investors from buying securities of such Chinese firms starting late next year. However, Trump won't be president when the order kicks in. It will be up to President-elect Joe Biden to decide whether to keep it and other U.S. actions aimed at Chinese tech companies and at curbing what the Trump administration considers unfair China trade practices.

4. Biden gets ready to expand his economic team

Biden is expected to name Neera Tanden to lead the Office of Management and Budget and Cecilia Rouse to chair the Council of Economic Advisers, three people familiar with the process confirmed to NBC News on Sunday. He also intends to nominate Adewale Adeyemo to be deputy Treasury secretary alongside Janet Yellen, according to NBC News. Biden is expected to introduce members of his economics team Tuesday in Wilmington, Delaware. Biden and Vice President-elect Kamala Harris on Sunday announced an all-female communications team, including Jennifer Psaki as White House press secretary.

White House coronavirus response coordinator Dr. Deborah Birx hopes to brief Biden's team Monday on America's response to the coronavirus as health officials express concern about how Thanksgiving gatherings might boost already spiking cases. In fact, Dr. Anthony Fauci, the nation's top infectious disease expert, said Sunday that Christmas and New Year's restrictions will be necessary to stem to the spread of the virus. Despite the CDC warning against Thanksgiving travel, more than 9 million people took flights before and after the holiday. The U.S. has nearly 13.4 million total confirmed Covid-19 cases. The data around new daily cases, while elevated, has been choppy due to the holiday.

— NBC News, Reuters and The Associated Press contributed to this report. Follow all the developments on Wall Street in real time with CNBC Pro's live markets blog. Get the latest on the pandemic with our coronavirus blog.