Chicago's police oversight agency on Thursday released bodycam and surveillance videos showing the controversial altercation between an officer and a woman walking her dog at North Avenue Beach last month.

Chicago's Civilian Office of Police Accountability released the videos to NBC 5 in response to a Freedom of Information Act request.

The videos released show the Aug. 28 incident in which Nikkita Brown was walking her dog along the lakefront after the beach had closed.

In the footage from the officer's body-worn camera, the officer can be heard telling Brown to leave the area several times as she repeatedly asks him to back up.

COPA released bodycam video of the incident involving a Chicago police officer and a woman walking her dog along the lakefront that was captured in a now-viral video.

"Get out of the park," the officer yells at her as she walks backward, facing him as she retreats from the lakefront and tells him several times to "back up."

"What do you not understand about that? The park is closed," he can be heard saying. "You are trespassing on city property and you will go to jail if you don’t take your dog and leave."

"Back up. Move from away from me," she responds. Brown exclaims that the officer doesn't have a mask, to which he responds that he doesn't need one outside, and she replies, "You're spitting on me."

"I feel threatened," she says twice as she continues to walk backwards, still facing him. 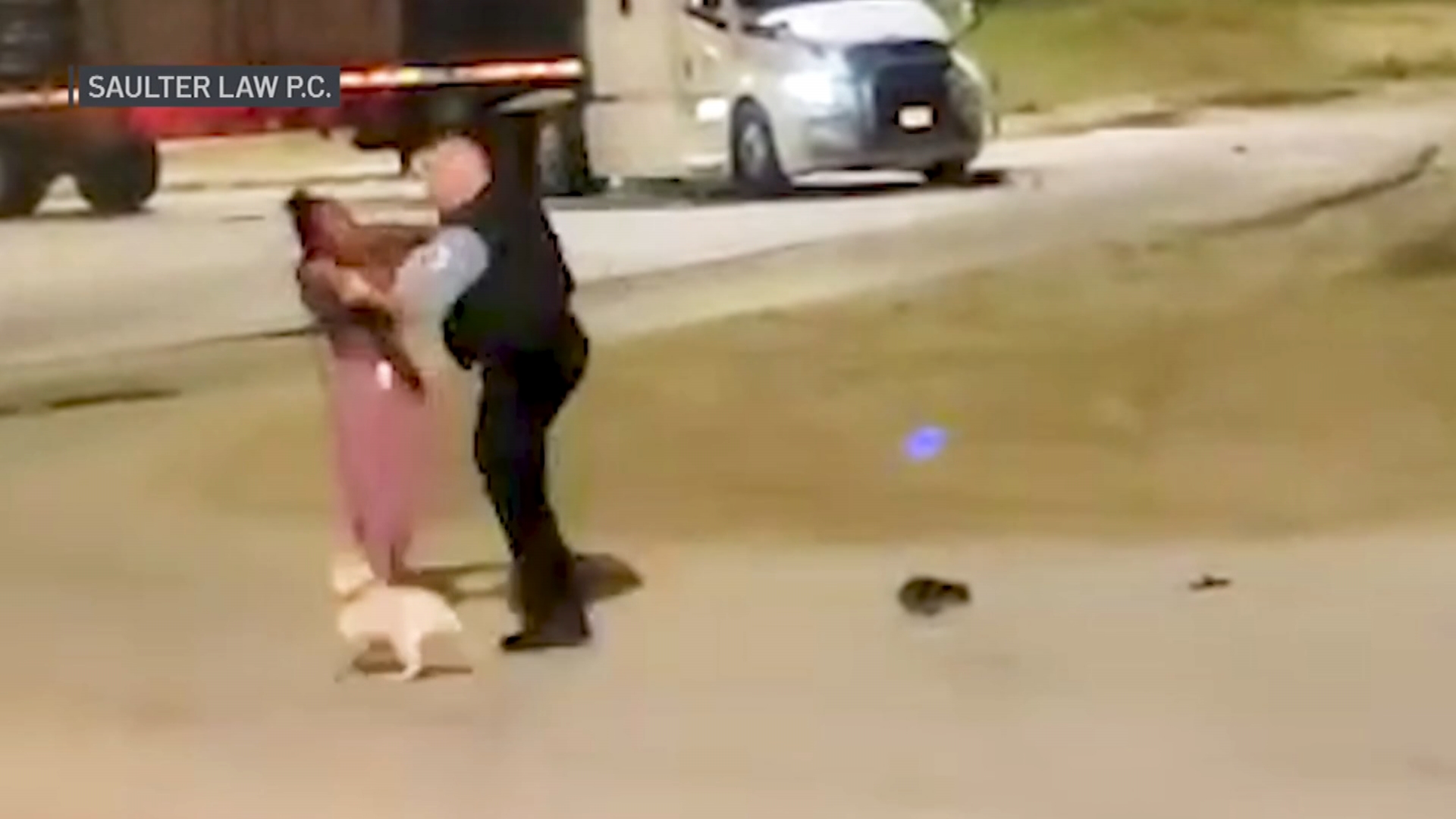 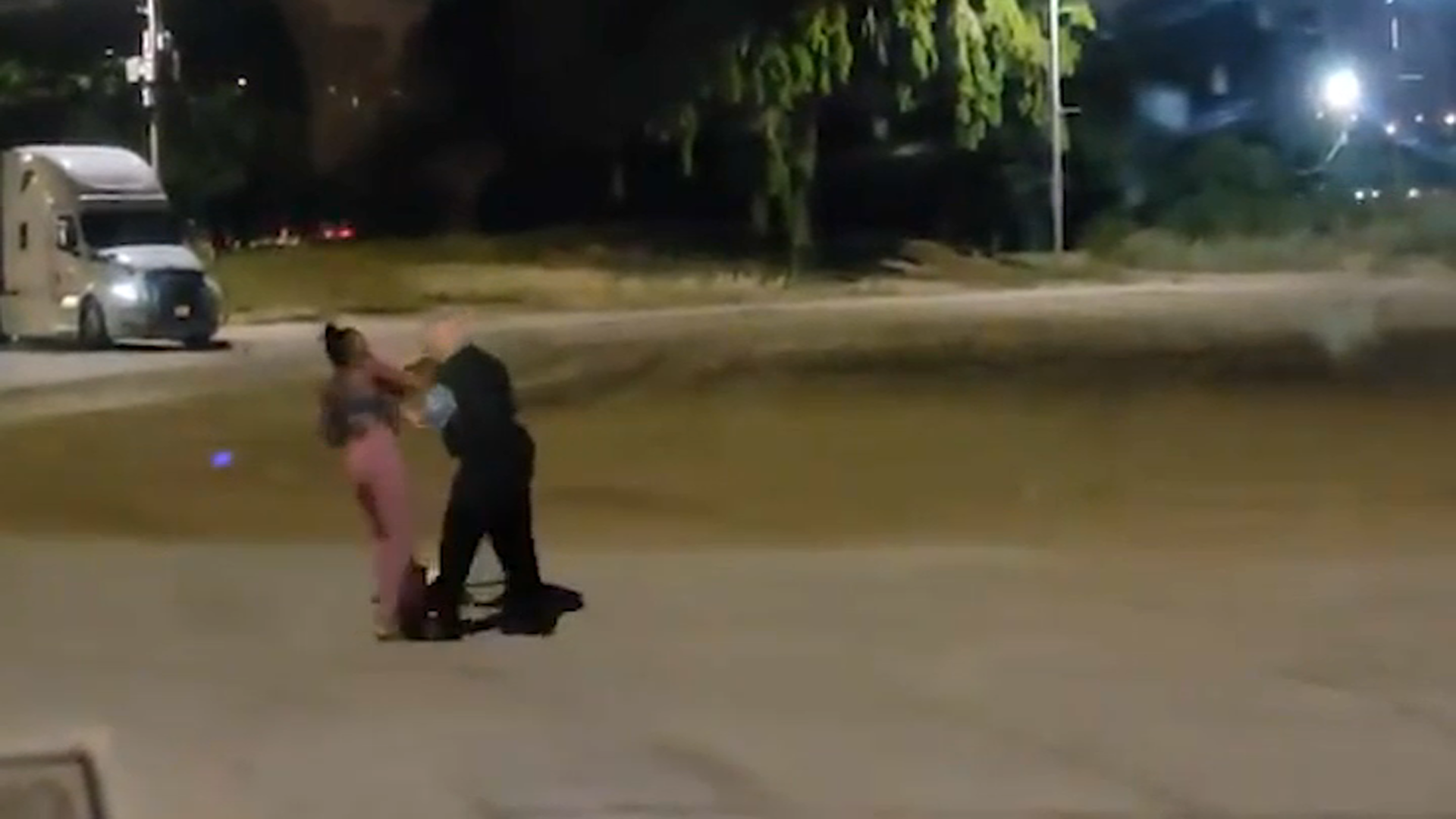 Officer in Lakefront Altercation Has Had More Than 2 Dozen Complaints Against Him, Records Show

At that point, Brown stops walking and looks down at her phone, telling the officer again to back up.

"I’m about to put handcuffs on you if you don’t keep walking," he says. "Do you want to test me on this?"

She tells him again to "back up" and the officer then grabs Brown by the hand with which she's holding her phone, the video shows. She repeatedly screams for him to let go of her as the two physically struggle.

"You don’t understand your situation, do you?" the officer asks as his body camera appears to tumble to the ground.

"When I tell you to exit, you don’t wait until the police are about to arrest you and then decide to comply," he can be heard saying, with the video image dark as the audio continues.

"Once I put handcuffs on you, you are going to jail and you’re gonna lose your dog," he continues as she repeatedly yells for him to "let go."

At the very end of the bodycam footage, Brown asks for and gets the officer's name before she leaves - without any arrest made or charges filed.

NBC 5 is not naming the officer because he has not been publicly identified or charged with any wrongdoing.

COPA also released on Thursday separate footage from police surveillance cameras in the area showing the incident from several other angles, including the moments leading up to the encounter.

Prior to the altercation with Brown, one video shows a couple walk toward the lakefront from the street before the officer, still in his vehicle, appears to have a brief conversation with them and they turn around. Brown is visible in the background of that video, walking along the beach.

The officer then drives over to a group of four people walking on the beach several paces behind Brown. That group stops, speaks with the officer and begins to walk away from the lakefront as the officer pulls away and heads toward Brown.

Another surveillance camera shows the officer pulling up to speak with Brown, who appears to turn away from him twice to keep walking a few steps south along the beach. The officer drives closer to her and exits his vehicle, the video shows, as the two continue to speak. Brown begins to record him with her cellphone as he moves toward her and the incident, at this point now also being captured on his body camera, escalates.

An NBC 5 Investigates' review of multiple databases found that the officer has been the subject of 27 complaints between 2000 and 2018, three of which were sustained. One of those complaints stemmed from the officer's 2008 arrest during a domestic incident while off duty in Tennessee, records show.

The Chicago Police Department also released Thursday, via public records request, documents on the two other sustained complaints against the officer. One of those complaints stemmed from a 2014 incident in which he conducted a traffic stop on a husband and wife, who were in their 50s at the time and whose first language was Polish.

The couple alleged that the officer, speaking to them in English, asked the husband how long he had been in the U.S.

When the man told the officer the answer, he and his wife said the officer responded with, "That's bulls--- you have been in this country for so long, you should speak English," according to the couple's statements to investigators.

The officer denied making that comment, records show. The complaint against the officer was sustained and he was suspended for two days.

The officer was also the subject of a lawsuit in 2017, when a junk collector sued the officer and the city of Chicago, alleging the officer falsely arrested him during a traffic stop the year before and charged him with unlawful use of a weapon based on tools in his car that he used for work. The charge against the junk collector was dismissed and the city settled the lawsuit for $15,000 with no admission of guilt.

Last week, NBC 5 obtained the 911 call Brown made after the altercation on the lakefront, in which she requests help and a Chicago police sergeant.

“I need to report an incident with a cop,” she told the dispatcher. “Can you just send a sergeant please?”

Brown told dispatchers that she was “harassed” as well as "profiled" and "threatened" by the officer during the incident.

The dispatcher asked Brown if the officer drew a weapon and she responds that he did not. She also mentioned that the officer was not wearing a mask, and said that she asked him for space on multiple occasions.

“He tried to drop me on several occasions and I asked for my space, and he did not have on a mask,” she says.